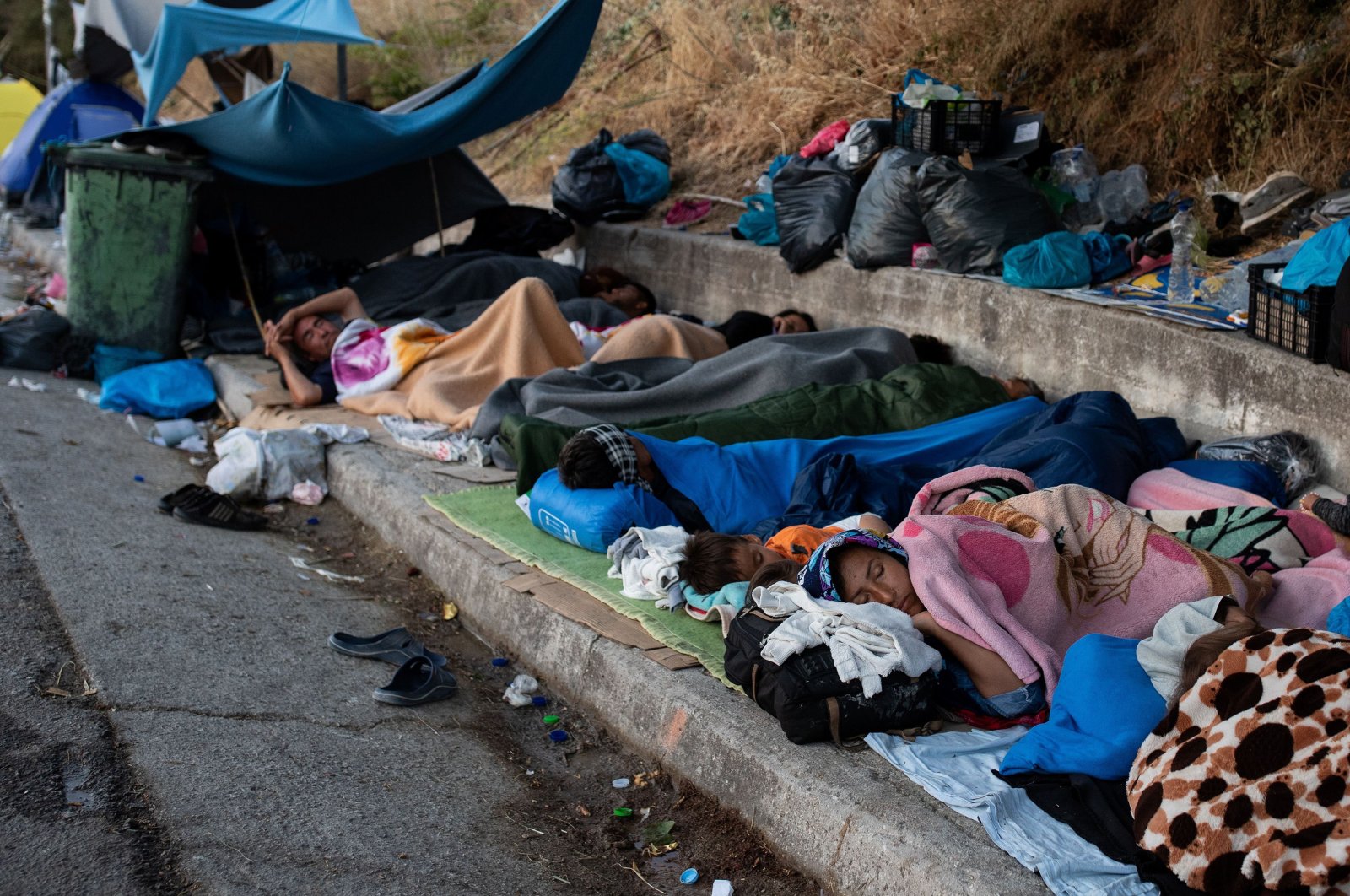 Refugees and migrants from the destroyed Moria camp sleep on the side of a road, on the island of Lesbos, Greece, Sep.13, 2020. (Reuters Photo)
by DAILY SABAH WITH AGENCIES Dec 17, 2020 12:45 pm
RECOMMENDED

According to a new report conducted by the International Rescue Committee (IRC), some 15,000 people remain trapped at the European Union-funded Reception and Identification Centers, camps known as "hot spots," that were set up on Europe's borders nearly five years ago for fast processing of asylum applications. The report compiled data from 904 asylum-seekers with the support of their mental health programs in Lesbos, Chios and Samos. The IRC said that one in five migrants had suicidal thoughts, while one in five reported having tried to commit suicide.

As of the end of October, 41% had reported symptoms of post-traumatic stress disorder, 35% reported suicidal thoughts and 18% reported having attempted to take their own lives, IRC said. Immediately after Greece imposed a virus lockdown in March, there was a 71% increase in psychotic symptoms and a 66% increase in self-harm, the group said.

The "hot spots" were established in 2015 and faced tremendous pressure as nearly a million refugees and migrants arrived on the Greek islands trying to reach Europe. More than 38,600 asylum-seekers lived in the five camps in January this year. By November their numbers dropped significantly, but asylum-seekers continued to live in “inhuman” conditions and “in great distress, with limited access to food, water and sanitation,” according to the report.

Thousands of migrants, who escaped a fire that destroyed the infamous Moria camp on the Greek island of Lesbos over three months ago, will have to stay on through the winter in harsh conditions that include the threat of the coronavirus. On Sept. 8-9, a fire gutted the sprawling, overcrowded and unsanitary migrant camp, Europe's largest, leaving nearly 13,000 homeless. Some 7,300 migrants, including more vulnerable groups, live in a new camp on the same island in Kara Tepe, a few kilometers away, close to the Turkish coast.

Desperate asylum-seekers live in tents that are not suited for winter conditions, lacking heating, hot water or enough showers or toilets as the new camp was designed to be a temporary solution. This year, in addition to the cold and rain, migrants at the camp face a heightened risk of contracting COVID-19 as it is impossible to maintain social distancing, frequently wash hands or have immediate access to medical care. On Sunday, Kara Tepe camp flooded for the third time following three days of rain amid stormy weather conditions.

“How could my mental health not be affected? When you wake up and find a rat on your chest, when you are constantly waiting (for your legal status to proceed), when rain is pouring into your tent for days, you have no toilet but just garbage around you?” a 23-year-old Syrian asylum-seeker told Doha-based Al Jazeera.

"The mental health of refugees has been decimated this year, in the wake of devastating fires in Lesbos and Samos, COVID and the lockdown restrictions brought with it, and the move to a new temporary reception center on Lesbos, which is yet to provide dignified living conditions," said IRC Greece director Dimitra Kalogeropoulou, according to Agence France-Press (AFP). Only a few thousand refugees have been allowed to relocate to other EU states this year, despite repeated requests by Athens and the European Commission. These include around 1,300 ailing or unaccompanied minors.

"We need a fair and predictable system whereby EU member states share responsibility for hosting new arrivals, which respects the right of each individual to a full assessment of their asylum application," said Imogen Sudbery, IRC director of policy for Europe.