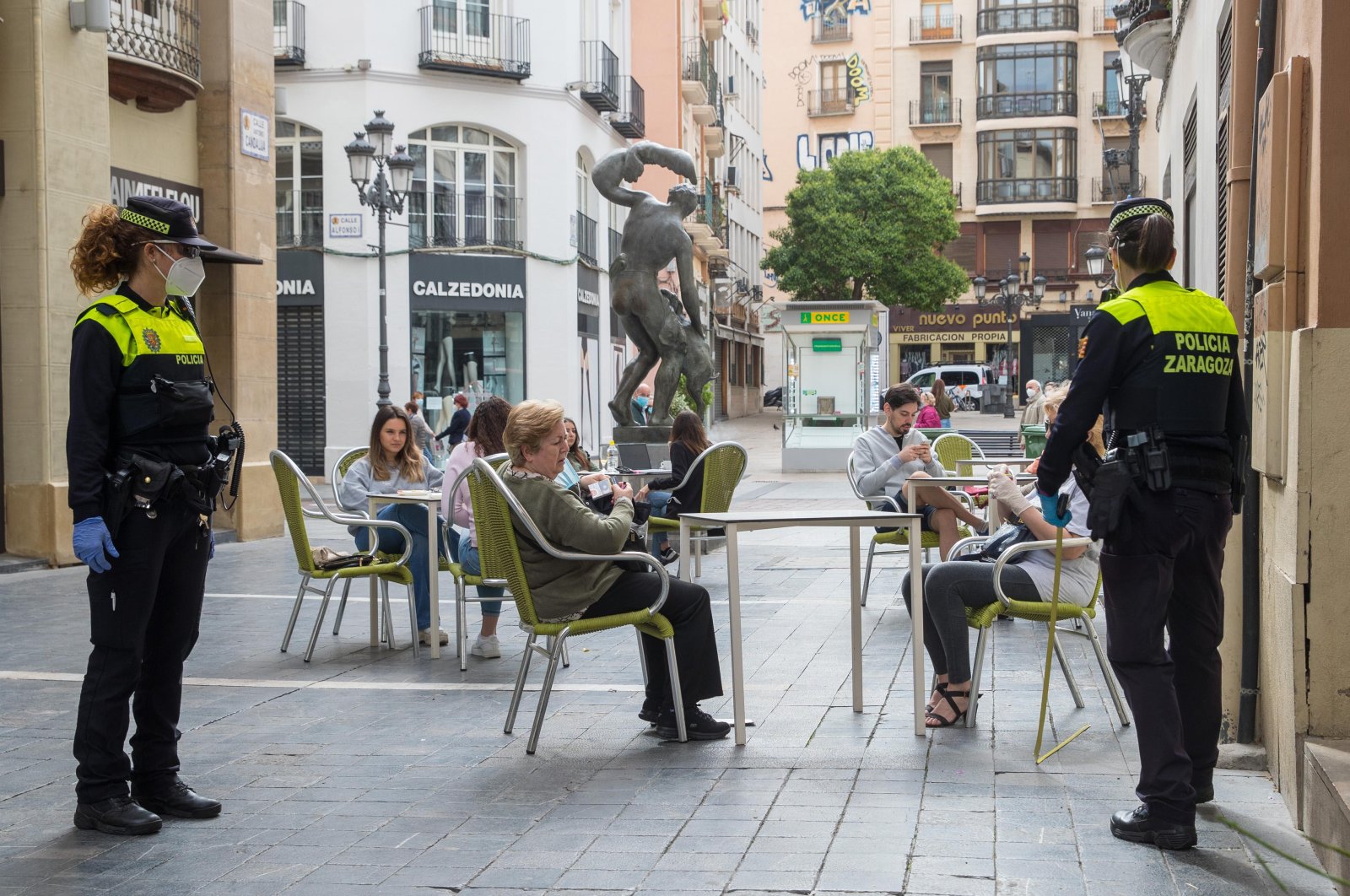 Police measure distance between tables at a bar terrace in downtown in Zaragoza, May 11, 2020. (EPA Photo)
by Compiled from Wire Services May 11, 2020 3:03 pm
RECOMMENDED

Millions of people in France and Spain were set to embrace a relaxation of stay-at-home rules on Monday, but Britain extended its lockdown as countries plot their way tentatively through the coronavirus crisis.
Fears of a second wave of the pandemic, which has killed more than 280,000 people worldwide and wrecked the global economy, stalked much of Europe and the world. However, officials have been emboldened by declining death rates, with France's toll dropping to 70 on Sunday, its lowest since early April, and Spain's daily fatalities falling below 200.

With millions out of work and economies flatlining, including in the United States, where 20 million people lost their jobs in April, governments are desperate to reopen, but most are choosing a gradual approach.

France's exit from its strict 54-day coronavirus lockdown got off to a bumpy start on Monday as media published images of severe crowding on Paris public transport. Broadcaster BFMTV showed scenes of a packed carriage on the city's metro Line 13 after the first train of the day ran 40 minutes late. Newspaper Le Monde meanwhile published photos of tightly packed crowds trying to board a suburban train at the Gare du Nord station. But, despite the initial problems, morning rush hour at the Gare de l'Est railway station and at metro stations on the Left Bank were eerily quiet in the main. With employers under instructions to keep staff working from home as much as possible, usually packed rush-hour metro trains passed through a Left Bank station with at most a few dozen passengers on board.

France had enforced an eight-week lockdown to curb the spread of the coronavirus that only allowed food stores, pharmacies and tobacconists to stay open. The French, long accustomed to being told their high taxes paid for the best health care in the world, have been dismayed by the rationing of critical drugs, face masks and equipment. They have watched with envy as neighboring Germany appears to have coped better with the coronavirus pandemic.
After initially enjoying a rebound in popularity, Macron's handling of the crisis has been criticized by opponents and swathes of the public and fueled mistrust. Macron's popularity rating fell to 34% in May, down five points from a month ago, according to a recent Elabe poll for Les Echos newspaper.

In Britain, Prime Minister Boris Johnson said it was too soon for the country to lift its lockdown, but he offered hope by unveiling a "conditional plan" to ease curbs in England during the months ahead. Johnson said the restrictions had brought "a colossal cost to our way of life," but it would be "madness" to squander the nation's progress by moving too early.

Almost seven weeks after a nationwide stay-at-home order was put in place, more than 31,800 have died during the outbreak in Britain, the worst toll in Europe and second only to the United States.

The worldwide tally for novel coronavirus infections surpassed 4.1 million on Monday, according to U.S.-based Johns Hopkins University. The data also shows that the global death toll from the virus has reached 282,700 with the number of recoveries exceeding 1.4 million. The U.S. remains the hardest-hit country by the pandemic with around 1.33 million diagnosed cases and 79,526 deaths.