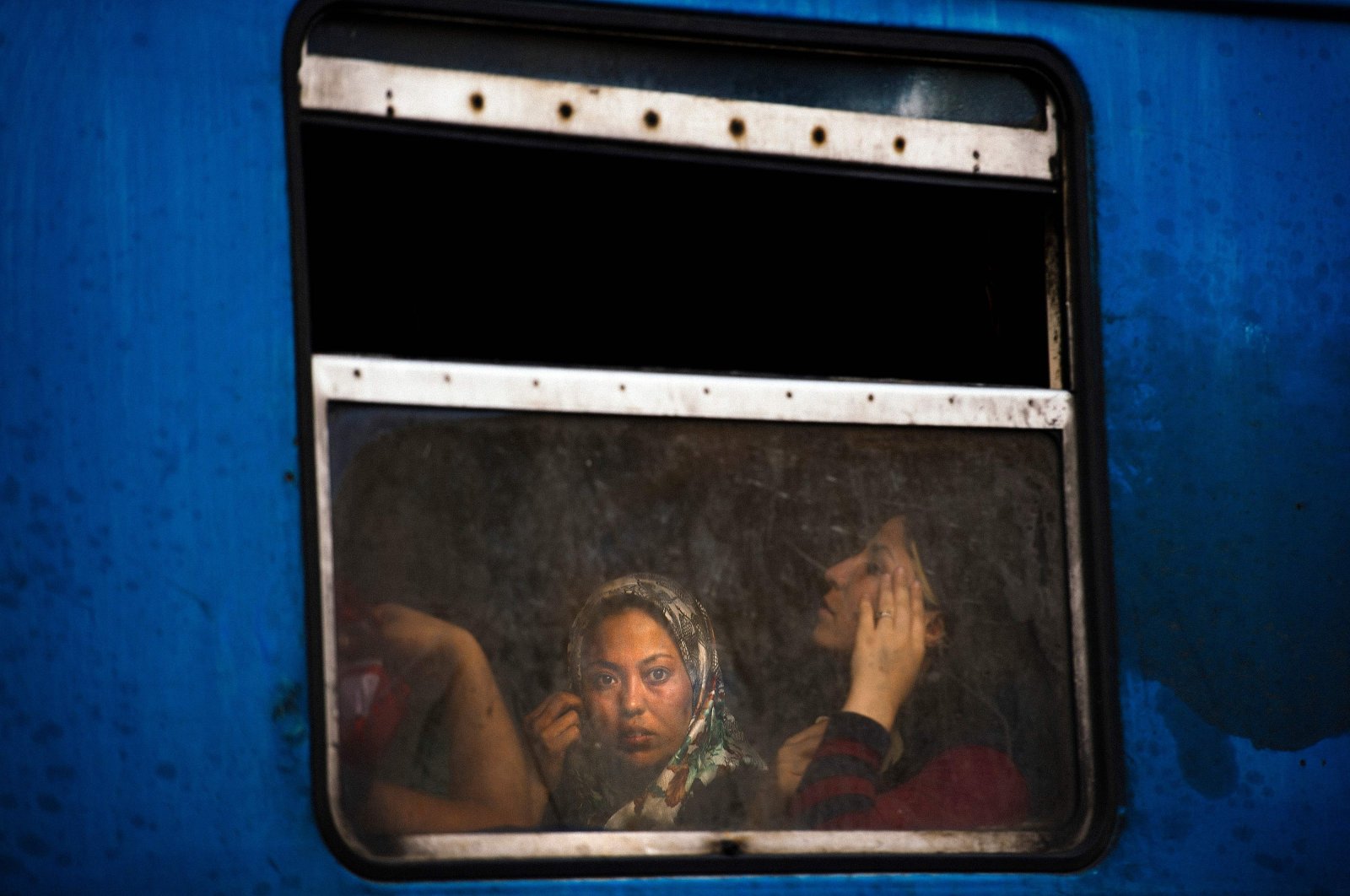 A migrant woman looks out the window of a train heading to the border with Serbia at the train station in Gevgelija, on the Macedonian-Greek border, Aug. 4, 2015. (AFP Photo)
by French Press Agency - AFP Aug 30, 2020 2:09 pm
RECOMMENDED

Since taking in more than a million people fleeing war and poverty in 2015, Europe has stepped up border controls but still falls short on common migration and asylum policies.

Until 2015, the Dublin regulation had called for the first EU country where asylum-seekers arrived to deal with their applications. But the system "completely exploded" under the pressure that year, De Somer said.

Early on, images of columns of migrants trekking across Europe and the body of 3-year-old Syrian boy Aylan Kurdi washed up on a Greek beach sparked sympathy. The Syrian toddler's drowning became a grim and shocking symbol of Europe's migrant crisis, as people from the Middle East, Africa and Asia attempted perilous journeys to flee conflict and poverty, and European governments scrambled over how to respond to the massive influx.

Chancellor Angela Merkel set aside the rules in summer 2015 to allow 900,000 mostly Syrian asylum-seekers into Germany, soon followed by countries with less experience in mass arrivals like Austria and Sweden. But a "quota" system to redistribute migrants among EU member countries, hastily cobbled together at Germany's request, never moved the 160,000 people originally agreed on.

Initial openness to the newcomers foundered on the opposition of Central European countries led by Viktor Orban's Hungary, as well as a surge in support for anti-immigration populist parties in Western Europe. For lack of agreement, the Schengen free-movement zone was "significantly weakened, with controls reinstated on several frontiers" between members, a senior French official familiar with migration policy said on condition of anonymity.

Some migrants fell through gaps in the legal system, wandering from one EU country to another filing new asylum claims as previous ones were rejected.

Meanwhile, national governments tightened their own laws piecemeal, limiting refuge rights or raising the bar for granting asylum. Paris "above all tried to speed up the processing of requests to quickly reject the ones without merit," the French official said. But informal refugee camps in the capital and northern port city Calais are now growing again, despite authorities doubling the number of places in state accommodation over five years.

"We have to stop this question from being a thorn in Europe's side," the official said. "We're no longer in crisis, and we should be able to manage today's arrivals."

Last year 612,000 people made initial asylum requests in Europe, according to statistics authority Eurostat, around half the numbers seen in 2015-16.

In July, Germany suggested the plan should include more preliminary triage of asylum-seekers at the EU's external borders and call for Frontex to deport those whose applications are denied. Berlin also hopes for a scheme to relocate migrants rescued at sea among roughly a dozen willing member countries, while those who refuse to take them in could contribute financial aid. Even that compromise would not plug all the holes in the European system. "There can't be a common European policy without common criteria for accepting asylum requests," said Didier Leschi, head of France's immigration and integration authority.