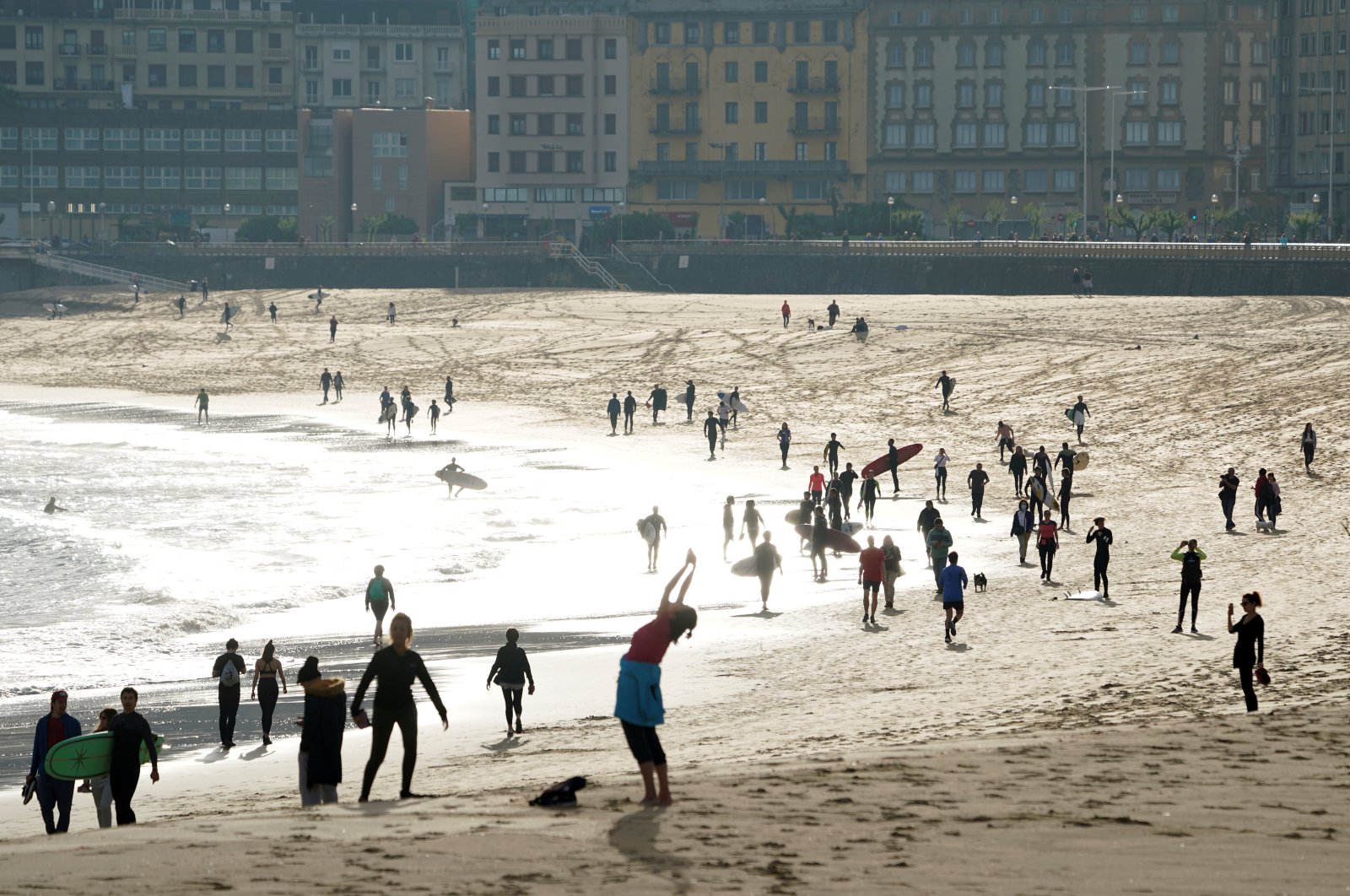 People exercise at Zurriola beach after adults were allowed out to exercise for the first time in seven weeks, as the government began easing coronavirus disease (COVID-19) restrictions, in San Sebastian, Spain, May 2, 2020.(REUTERS Photo)
by French Press Agency - AFP May 03, 2020 9:17 am
RECOMMENDED

Europe on Sunday prepared for a further cautious easing of coronavirus restrictions following signs the pandemic may be slowing after Spaniards flocked to the streets to jog, cycle and rollerskate for the first time after 48 days of confinement.

More than 242,000 people have been killed and 3.4 million infected worldwide by the virus, which has left half of humanity under some form of lockdown and pushed the global economy towards its worst downturn since the Great Depression.

With signs that the spread of the contagion has been brought under control, parts of Europe and the U.S. have begun to lift restrictions to try to inject life into economies crippled by weeks of closures and ease the pressure from populations wearying of captivity.

After a two-month lockdown in Italy – with the second-highest number of virus deaths in the world – people on Monday will be allowed to stroll in parks and visit relatives. Restaurants can open for takeaway and wholesale stores can resume business.

And in Hungary, some stores and museums, outdoor spaces of restaurants and hotels, beaches and baths can reopen from Monday – but restrictions will remain in the capital Budapest, which has recorded about 70% of the country's cases.

Germany will also continue its easing at the start of the week, with schools in some areas expected to reopen, while Slovenia and Poland will allow some businesses and public spaces to operate again.

France has said it will partially lift its lockdown on May 11.

But with health experts warning the disease could hit hard once again, they are sticking to social distancing measures, the use of masks and more testing to try to track infections.

"We must maintain social distancing, maximum hygiene levels, and masks. We've done our bit to the best of our ability. From Monday, it's up to you," Italian emergency response official Domenico Arcuri said.

Despite the lingering concerns, there was joy and relief in Spain on Saturday, where people were allowed to exercise and walk freely after the government eased seven weeks of strict lockdown in a country with one of the highest number of deaths at more than 25,000.

"After so many weeks in confinement I badly wanted to go out, run, see the world," said financial advisor Marcos Abeytua in Madrid. "Yesterday I was like a child on Christmas Eve."

Across the Atlantic, the pressure to ease virus measures is intense on leaders in the U.S., where the economy has been hammered with tens of millions left jobless and anti-lockdown protests erupting in many areas.

Crowds of demonstrators, some armed, denounced the lockdowns in New Hampshire and Kentucky, while at California's Huntington Beach, some surfers defied orders to stay away from the shore.

The U.S. has the most coronavirus deaths in the world and President Donald Trump is keen for a turnaround to help reduce the economic pain.

Billionaire investor Warren Buffett was optimistic, saying Saturday he's confident the American economy will bounce back because "American magic has always prevailed" – though it is far from certain if that recovery will come in time to help Trump win reelection in November.

There are signs that the pandemic is slowing down in some parts of the U.S.

In New York City, the epicenter of the U.S. outbreak, an emergency field hospital erected in Central Park is set to close, the Christian charity running it said Saturday, as virus cases decline in the city.

But authorities are wary of letting their guard down too fast, with fears the virus could wreak havoc in the most vulnerable communities in the U.S.

A massive wave of infections is sweeping through America's prison population – the world's largest at 2.3 million – with coronavirus deaths on the rise in jails and penitentiaries across the country.

Riots over inadequate protection and slow responses by authorities have already taken place in prisons in Washington state and Kansas.

"Things are beyond breaking point at this facility," said Brian Miller, an officer at the Marion prison in Ohio. "Right now it's hell."

In addition to Europe, countries elsewhere are also relaxing some coronavirus measures.

Singapore has announced it would gradually ease some of its restrictions, while Turkey on Saturday said it would lift curbs on the export of medical supplies.

Thailand allowed businesses such as restaurants, hair salons and outdoor markets to reopen Sunday so long as social distancing was maintained and temperature checks carried out.

But experts have warned that some countries are still in the first stages of their outbreaks and things could get worse there.

In a sign of the pandemic's emotional toll, families of coronavirus victims in the Philippines are being denied traditional death rites in favor of hurried, impersonal cremations, with virus restrictions often meaning they cannot take a last look at their loved ones.

Leandro Resurreccion IV, 26, was not allowed to visit his father as he was dying from the virus in hospital, and never saw his corpse – just the plastic he was wrapped in.

"The fact that ... my family wasn't able to say goodbye could probably be the second most tragic thing that happened after my dad's death," he said.