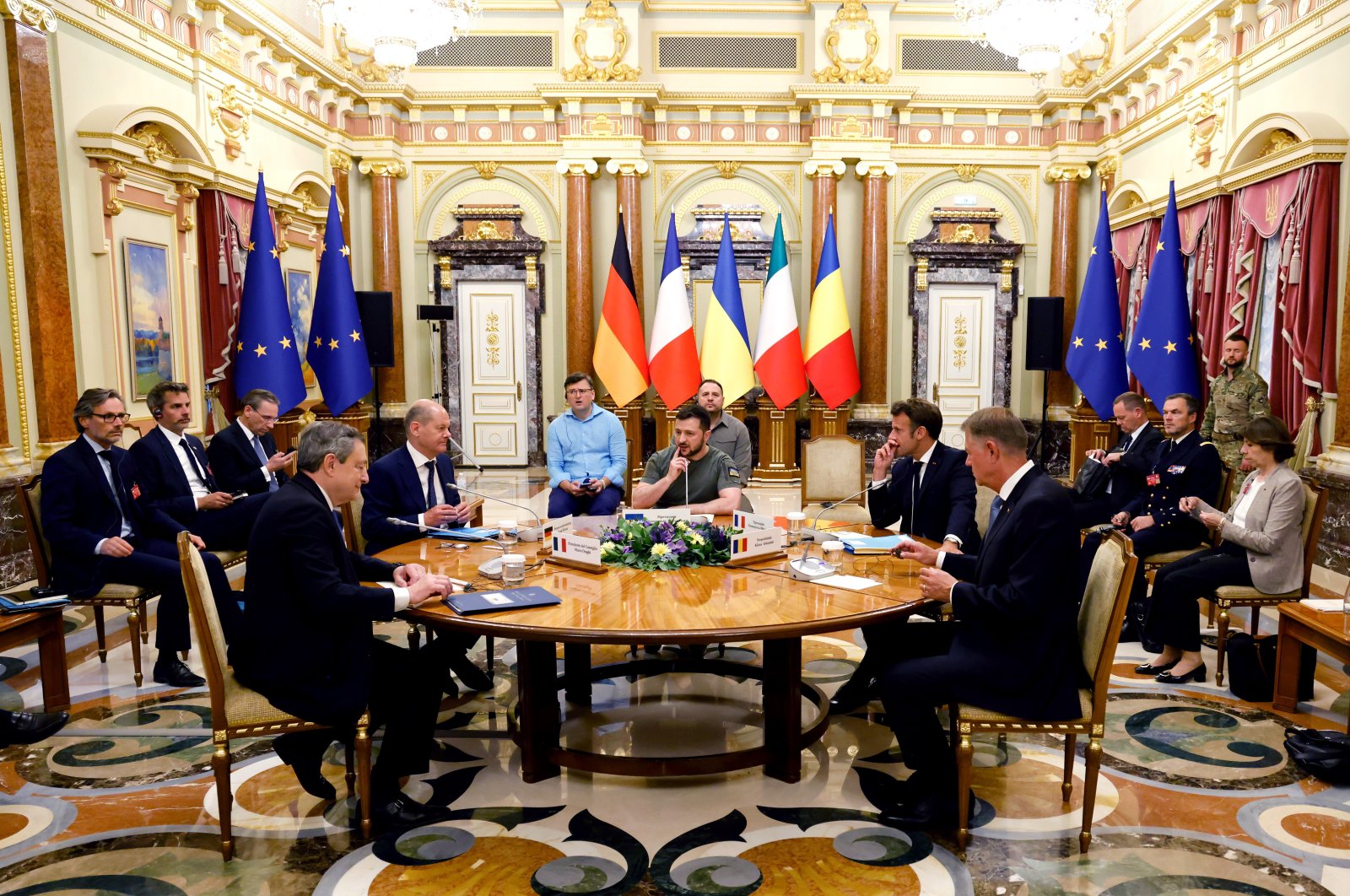 Three leaders of France, Germany, Italy walked around ruins of buildings and wrecked cars in the Ukrainian town of Irpin in a show of support, which Kyiv hopes will be followed by tougher action, to help in the ongoing war with Russia as around 10,000 civilians are still trapped in the eastern city of Severodonetsk, where intense fighting with Russian forces is taking place

French President Emmanuel Macron, German Chancellor Olaf Scholz and Italian Prime Minister Mario Draghi arrived in Kyiv on Thursday in a show of collective European support for Ukraine. The move is the highest-profile visit to the country's capital since Russia's invasion, a day after the United States pledged $1 billion worth of new arms for the embattled Ukrainian forces.

The leaders of France, Germany, Italy accompanied by Romanian leader Klaus Iohannis walked around ruined buildings and wrecked cars in the Ukrainian town of Irpin. The tour of Irpin, the scene of heavy fighting early in the invasion, was meant to highlight what Ukraine and its backers say were large-scale atrocities committed by Russian troops.

"It's a heroic city ... marked by the stigma of barbarism," Macron told the reporters.

Air raid sirens blared as the visit got underway. The leaders, dressed in suits but not wearing any visible protective equipment, were surrounded by heavily armed soldiers.

The visit by three European leaders comes as Ukraine once again pleaded for more weapons to fend off Russian advances in the south and the east. Major-General Dmytro Marchenko, who leads Ukraine's forces in Mykolaiv, said his troops could achieve victory over Russia if they are given the right weapons.

"It's an important moment. It's a message of unity we're sending to the Ukrainians," Macron said earlier as he arrived in Kyiv.

The Ukrainian town of Irpin, like Bucha before it, has become a symbol of the "cruelty" of Russia's war in Ukraine and its senseless violence, German Chancellor Olaf Scholz said on the visit to the Kyiv suburb, adding that the war must end.

"Irpin, like Bucha, has become a symbol of the unimaginable cruelty of the Russian war, of senseless violence," Scholz wrote on Twitter. "The brutal destruction of this city is a warning: This war must end."

Italian Prime Minister Mario Draghi, for his part, said Thursday that Ukrainian infrastructure damaged and destroyed by invading Russian forces would be rebuilt. "They destroyed kindergartens, they destroyed playgrounds. Everything will be rebuilt," he told journalists.

It is the first time that the leaders of the three European Union countries have visited Kyiv since Russia's Feb. 24 invasion of Ukraine. The trip has taken weeks to organize with the three men looking to overcome criticism within Ukraine over their response to the war.

Kyiv has criticized France, Germany and, to a lesser extent, Italy, for alleged foot-dragging in their support for Ukraine, accusing them of being slow to deliver weapons and of putting their own prosperity ahead of Ukraine's freedom and security.

The symbolic visit comes a day before the European Commission recommends on Ukraine's status as an EU candidate, something the biggest European nations have been lukewarm about and are set to discuss at a leaders' summit on June 23-24.

Asked why the visit was taking place now, an Elysee official said they had considered it was best to do it just before an EU summit next week that is due to discuss Kyiv's bid to join the 27-nation bloc.

"The useful time for this visit was the European Council of 23/24, where a strong symbolic gesture is expected by the Ukrainians," the Elysee official said.

"A balance has to be found between Ukraine's natural aspirations to (join) the EU at a very special time, and attention to all the countries which already have candidate status and are stuck in the negotiation chapters and the fact that we must not destabilize the EU or fracture it."

Speaking during a visit to neighboring Romania on Wednesday, Macron said that "we, the EU, need to send clear political signals to Ukraine and the Ukrainian people, who have been resisting heroically for several months."

Other leading figures to have visited Ukraine since the start of the war include British Prime Minister Boris Johnson, U.S. Secretary of State Antony Blinken and U.N. chief Antonio Guterres.

Meanwhile, the Kremlin on Thursday warned against new Western weapons supplies to Ukraine. "I would like to hope that the leaders of these three states and the President of Romania will not only focus on supporting Ukraine by further pumping Ukraine with weapons," Kremlin spokesperson Dmitry Peskov said, adding that it would be "absolutely useless and will cause further damage to the country."

In Brussels, Ukrainian Defense Minister Oleksiy Reznikov and other officials met Wednesday with some countries of the Ukraine Defense Contact Group at the NATO headquarters asking for a surge in weapons and ammunition.

"Ukraine is really in a very critical situation and therefore, it's an urgent need to step up," NATO chief Jens Stoltenberg told journalists.

Around 10,000 civilians are trapped in Ukraine's eastern city of Severodonetsk, where intense fighting with Russia has raged for weeks, the local governor said Thursday.

"Out of 100,000 residents, around 10,000 remain," Luhansk governor Serhiy Gaidai said on Telegram. He said Kyiv's army is "holding back the enemy as much as possible."

The city is the biggest in the Luhansk region that is still in Ukrainian hands and it has been under heavy shelling for weeks. The three bridges linking the city to Ukrainian-held Lysychansk, just across the river, have all been destroyed.

The Ukrainian authorities have said hundreds of civilians have taken refuge in the city's Azot chemical plant and that the factory is constantly bombarded. Russia on Wednesday accused Ukrainian forces of preventing these civilians from being evacuated.