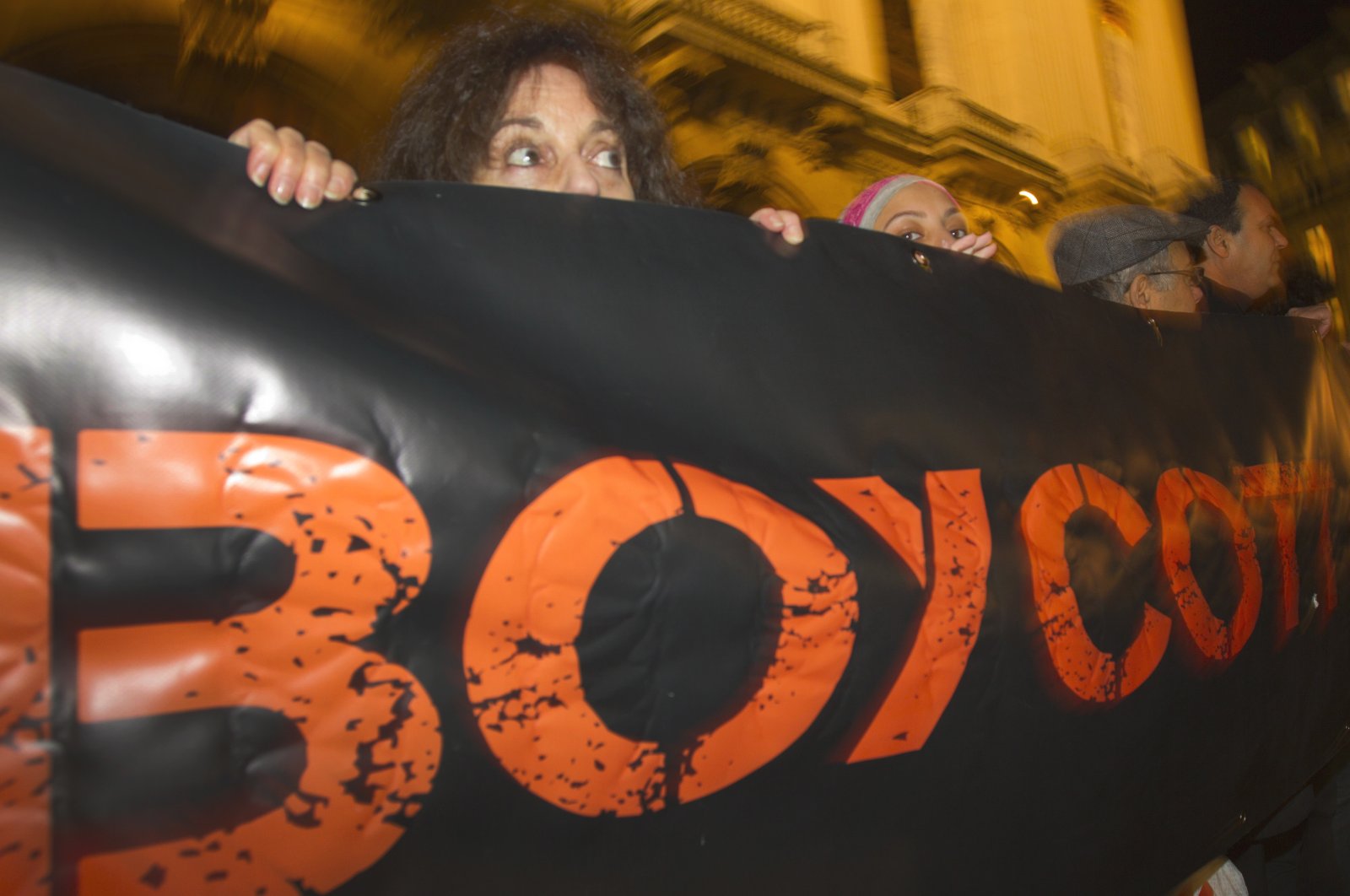 French demonstrators and supporters of the BDS movement hold a placard with the word "Boycott" during a demonstration in Paris, France, Oct. 31, 2012. (AP Photo)
by Agencies
Jun 11, 2020 3:53 pm

The European Court of Human Rights ruled Thursday that France violated the freedom of expression of pro-Palestinian activists who were convicted for campaigning against Israeli goods.

The court ordered the French government to pay 101,000 euros ($115,000) in overall damages to a group of 11 activists. The global Boycott, Divestment and Sanctions (BDS) movement hailed the court's decision as a major victory.

The protesters, led by French activist Jean-Michel Baldassi, were convicted of incitement to economic discrimination after taking part in a 2009 demonstration at a supermarket in the eastern French town of Illzach and handing out leaflets calling for a boycott of Israeli products. France’s top court upheld the conviction.

The European human rights court, however, found that the criminal conviction "had no relevant and sufficient grounds" and violated the freedom of expression of the protesters. The court is based in the French city of Strasbourg, and countries that signed the European Convention on Human Rights, including France, are bound by its rulings.

"This momentous court ruling is a decisive victory for freedom of expression, for human rights defenders, and for the BDS movement for Palestinian freedom, justice and equality,” Rita Ahmad from the Palestinian-led BDS movement said in a statement.

The protests, which came a few months after a flare-up in fighting between Israeli forces and Hamas militants in Gaza, echoed longstanding calls by nongovernmental organizations to denounce Israel's policies, including its settlements in Palestinian territories.

Israel and its supporters have promoted a number of anti-BDS legislative initiatives overseas, particularly in the U.S. and Europe.

In the French case, the human rights court described the protesters’ actions as a form of political expression and a subject of public interest. It noted that Article 10 of the human rights charter, which guarantees freedom of expression, allows for such protest action as long as it doesn’t "cross the line and turn into a call for violence, hatred or intolerance.”

The French government has three months to appeal but did not immediately comment Thursday.

Thursday’s decision followed a 2016 statement by the European Union’s foreign affairs chief at the time, Federica Mogherini, who said that BDS activities were protected by the freedom of expression, even though the EU opposes BDS’ attempts to isolate Israel.

Amnesty International, which in 2018 saw one of its U.S. employees denied access to the West Bank over its support of the boycott, hailed the European court's ruling.

"Today's landmark decision sets a significant precedent that should stop the misuse of anti-discrimination laws to target activists campaigning against human rights violations perpetrated by Israel against Palestinians," Marco Perolini of Amnesty France said in a statement.

Amnesty International expressed hope that the ruling would "send a clear message to all European states that they must stop the prosecution of peaceful activists.”