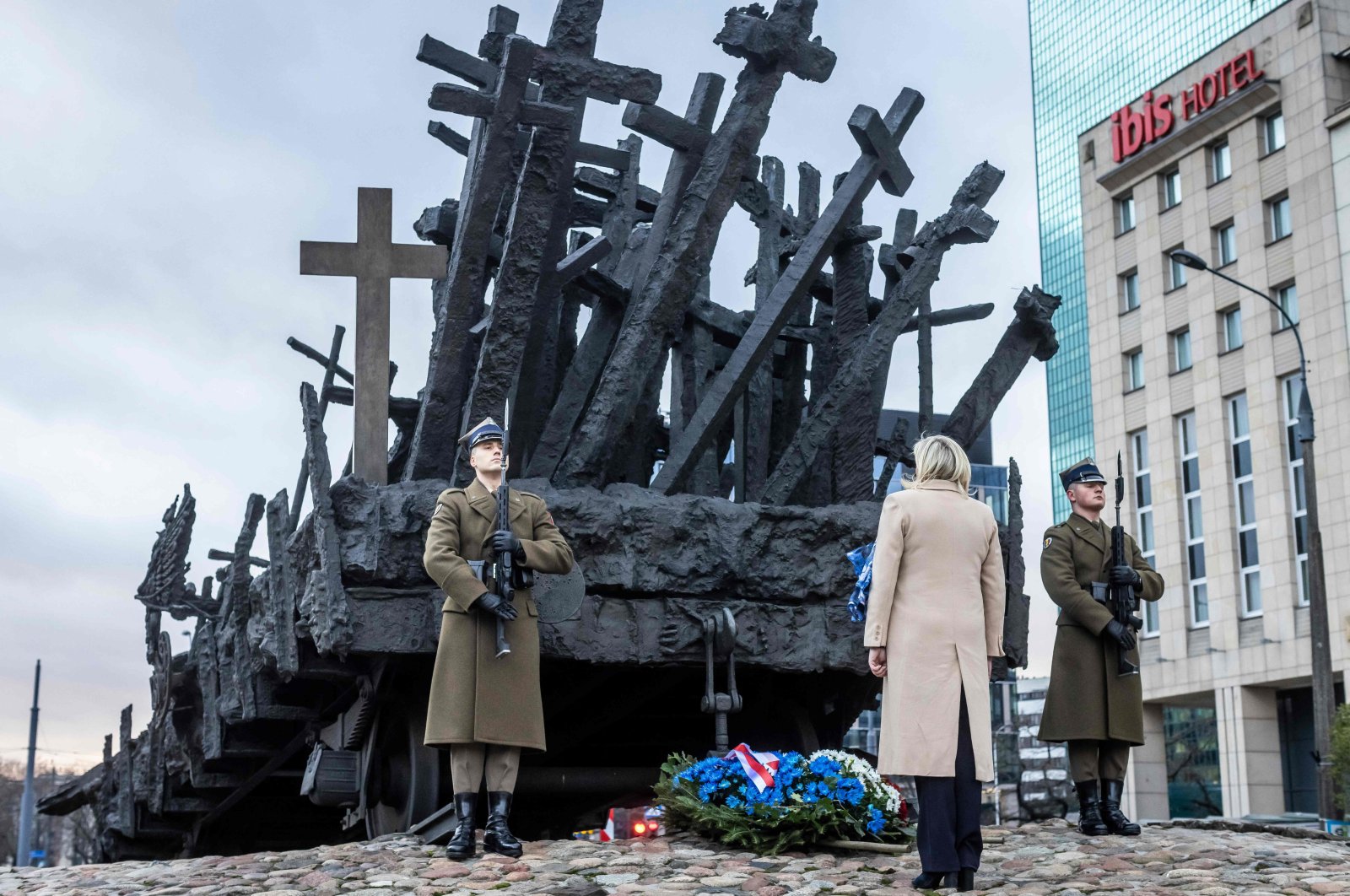 Leader of French far-right party Rassemblement National (RN) and candidate for the French presidential elections Marine Le Pen (C) takes part in a wreath-laying ceremony in front of the Monument to the Fallen and Murdered in the East commemorating victims of Soviet invasion on 1939 in Warsaw, Poland, Dec. 3, 2021. (AFP Photo)
by French Press Agency - AFP Dec 04, 2021 1:22 pm
RECOMMENDED

Leaders of European far-right and nationalist parties met in Warsaw on Saturday with the aim of creating a new alliance that would become the second-biggest grouping in the European Parliament.

The talks at the Regent Warsaw Hotel bring together 14 parties and are being hosted by Jaroslaw Kaczynski, the leader of Poland's ruling right-wing populist Law and Justice (PiS) party.

Le Pen, a candidate in France's presidential election in April, said on Friday that the meeting would be "an important step" but she did not expect any imminent announcement of a new group.

"We can be optimistic about the launch of this political force in the months to come," she said.

Around a dozen activists protested outside as the talks got underway, shouting "No to fascism!"

One notable absentee is Matteo Salvini, leader of Italy's League, which put out a statement saying that "the time needs to be right" for the new group.

Salvini was one of the signatories of a declaration in July by 16 parties and movements announcing plans for a "grand alliance" in the European Parliament – the prelude for Saturday's talks.

Orban's Fidesz left the center-right European People's Party, the biggest group in the European Parliament, in March and is looking for a new home.

"We want to change the politics of Brussels," Orban wrote on Facebook ahead of Saturday's meeting.

"We've been working for months to create a strong party family, hopefully we can make a step towards this goal today or tomorrow," he said.

Ewa Marciniak, a political scientist at the Polish Academy of Sciences, said participants would try to "minimize the differences between them," including on issues such as relations with Russia, as well as attitudes to abortion and LGBTQ rights.

Instead she said they would emphasize "their willingness to go back to the roots of the European Union."

Poland and Hungary accuse the EU of undermining their sovereignty while Brussels says the two countries are rolling back democratic freedoms.

Polish Prime Minister Mateusz Morawiecki on Friday said Europe found itself at "a turning point" and called for member states to put an end to the "usurpation that is concentrating power in the hands of the European elites."

Le Pen met with Morawiecki and Orban in October, expressing support over their stand-off with the European Union and their firm stance against mass immigration.

But on Friday she said that forging a new alliance would not be quick, warning that "bringing together political movements is a long haul. It takes time."