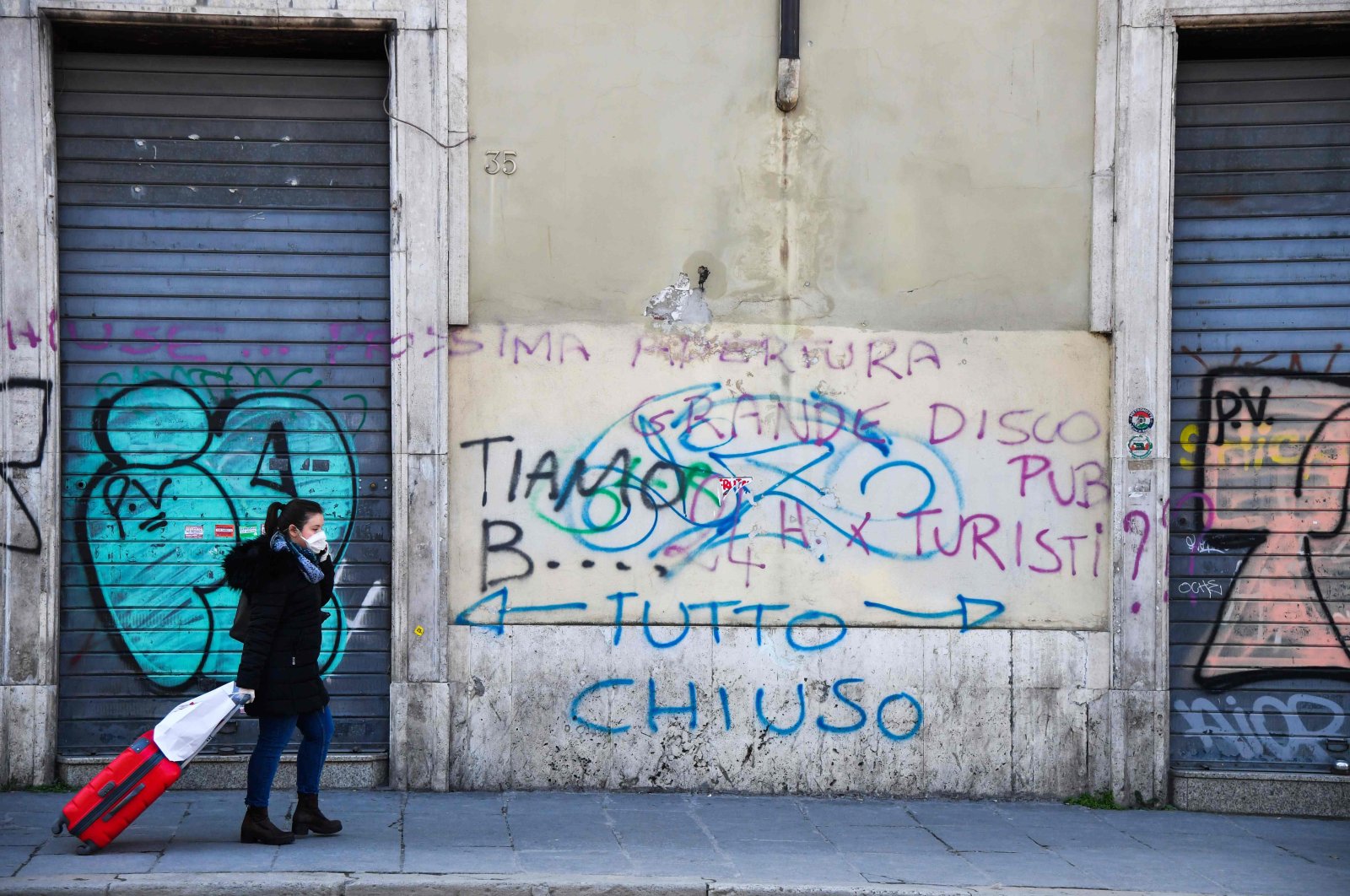 A commuter wearing a protective mask walks past closed shops and an inscription on the wall reading "All Closed," Rome, March 11, 2020. (AFP Photo)
by Daily Sabah with Agencies Mar 11, 2020 2:43 pm
RECOMMENDED

European countries have been struggling to find ways to contain the new coronavirus as Italy replaced China as the new epicenter of the pandemic. The country is one of the worst afflicted globally by the virus, which has begun to rage across the region.

Around 10,100 cases and 631 deaths have been reported so far in Italy. The country ordered the closure of all shops except groceries and pharmacies due to the coronavirus Wednesday. The country's death toll nationwide has been reported to be 5% because Italy has the world's oldest population after Japan; the virus tends to be riskier for the elderly and sick.

Spain reported that the number of infections in the country had crossed 2,000 with 47 deaths, thus overtaking France. The Health Ministry on Wednesday reported 2,002 cases nationally, up by 363 from the previous day. Deaths reached 47, up by 11 from Tuesday. Fernando Simón, director of Spain's health emergency center, said Wednesday that Madrid’s fatalities are high because much of the contagion there is taking place in nursing homes.

In France, the government is preparing the public for a worsening of the epidemic but has ruled out the kind of draconian confinement measures imposed by Italy for the moment. The epidemic, which has infected Culture Minister Franck Riester and five MPs, is approaching the third level of alert, which would include school closures and public transport suspensions. France, Germany and Spain follow Italy in deciding whether football league matches will be played behind closed doors.

In Belgium, the health ministry announced a first death related to the coronavirus. Health authorities said Wednesday the patient was a 90-year-old woman. Belgium confirmed 314 cases of COVID-19, as of Wednesday. But the ministry predicted that more cases would soon emerge, saying hospitals are seeing more and more people with respiratory infections.

A total of 277 cases of coronavirus have so far been identified in Norway, and the spread is now no longer always traceable to foreign travel, according to the Nordic country's Institute of Public Health. Last week, the Norwegian army closed a military base in northern Norway after a soldier tested positive for the new coronavirus. That is the only case detected in the Norwegian armed forces to date, but 240 soldiers are still in quarantine as a result, according to reports.

Hungary declared a nationwide state of emergency due to the spread of the coronavirus and banned the entry of people arriving from Italy, China, South Korea and Iran. So far, Hungary has 13 cases of the coronavirus, mostly Iranian students who recently returned from their homeland.

In Iran, the death toll from the new coronavirus climbed for another consecutive day, killing 62 more people in the past 24 hours as the government on Wednesday raised the nationwide death toll to 354. Iran's Health Ministry said the deaths are among some 9,000 confirmed cases in Iran, where the virus has spread to all of the country's provinces.

Across the Middle East, the vast majority of the 9,700 people who have contracted COVID-19 are in hard-hit Iran or had recently returned from there. The Islamic republic has one of the world's worst death tolls outside of China. Outside of Iran, only Iraq, Egypt and Lebanon have recorded deaths from the virus in the Middle East.