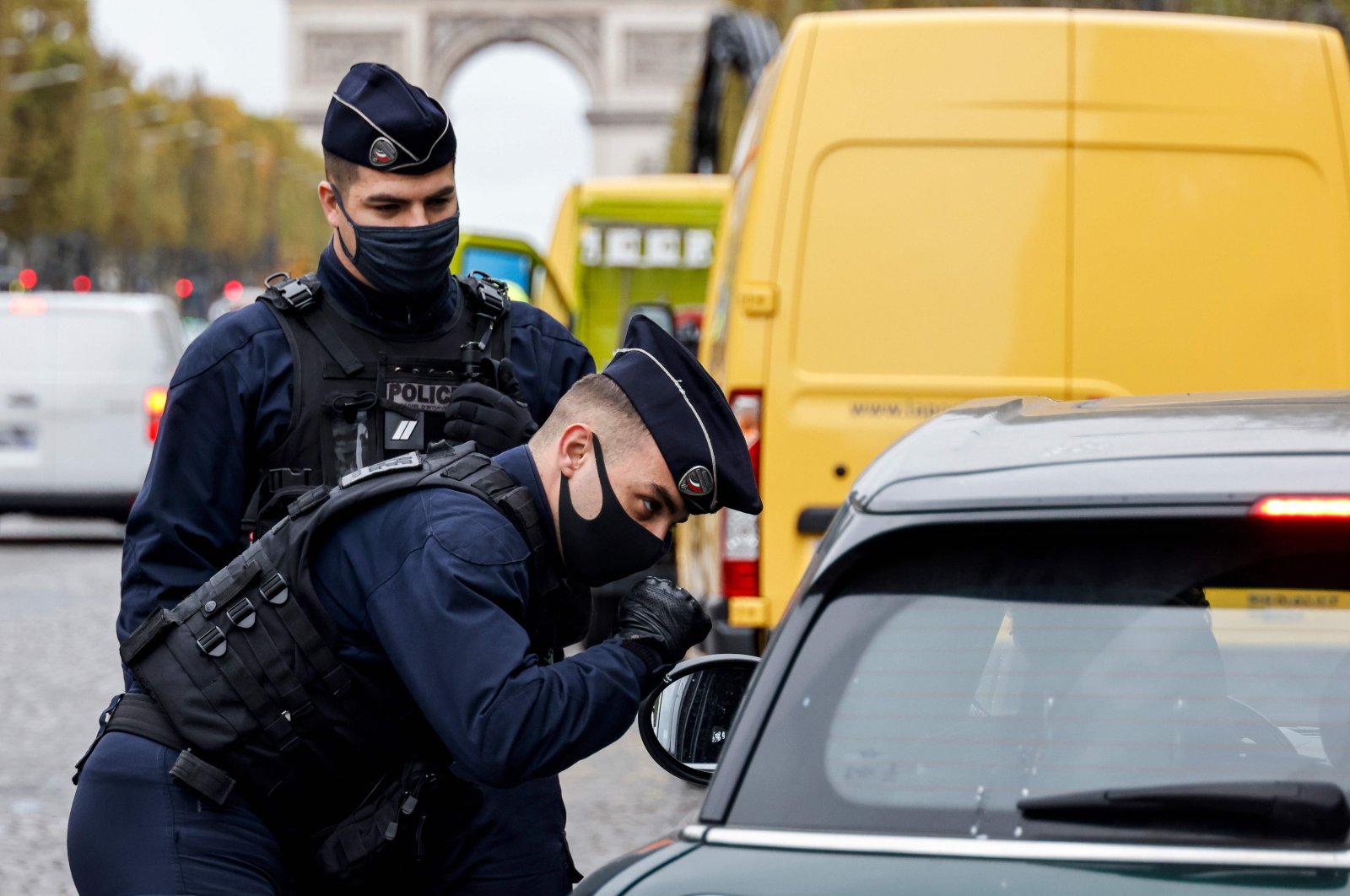 French police officers control a car on the Champs-Elysee avenue in Paris, on Oct. 30, 2020, on the first day of a second national general lockdown aimed at curbing the spread of COVID-19. (AFP Photo)
by Agencies
Oct 30, 2020 1:52 pm

French police have detained a man believed to have been in contact with the knifeman who brutally killed three people at a church in Nice, judicial sources said Friday, with security forces on high alert for other attacks ahead of a key Catholic holiday.

The 47-year-old was taken into custody late Thursday after the killings at Nice's Notre-Dame basilica. The attacker, identified as Ibrahim Isssaoui, is in hospital after being shot several times by police. He is believed to have been in contact with the attacker the night before the attack, according to a judicial official.

President Emmanuel Macron has stepped up military patrols at churches and other sites ahead of All Saints' Day on Sunday. Many Catholic families mark the day with visits to cemeteries, which will remain open for visits despite a new coronavirus lockdown that took effect Friday.

France’s anti-terrorism prosecutor said the suspect is a Tunisian born in 1999 who reached the Italian island of Lampedusa, a key landing point for migrants crossing in boats from North Africa, on Sept. 20 and traveled to Bari, a port city in southern Italy, on Oct. 9.

It is not clear when he arrived in Nice. Tunisians fleeing a virus-battered economy make up the largest contingent of migrants landing in Italy this year. Italian media reported that from Lampedusa, where Issaoui was one of 1,300 arriving migrants on Sept. 20, he was placed with 800 others on a virus quarantine boat in Puglia.

After the two-week quarantine, he received a notice that he was being expelled from Italy for illegal entry and was given seven days to leave the country, according to Milan daily Corriere della Sera.

Italy's interior minister rejected any suggestion that Italian authorities shared the blame for what had happened. "I say that there is no responsibility on our part," Luciana Lamorgese told journalists in response to calls from the opposition for her resignation. She said it was "time to stop with these polemics and to be close to the French people and to other European countries because this is an attack on Europe."

The suspect arrived by migrant boat to Lampedusa island, Italy's southernmost point, on Sept. 20, and was issued with an expulsion order on Oct. 9, which he ignored, Lamorgese said. He raised no particular alarm bells because he had not been flagged as dangerous by Tunisian authorities or by the intelligence community, the minister said.

Tunisian anti-terrorism authorities opened an investigation Friday into an online claim of responsibility by a person who said the attack was staged by a group called Al Mehdi of Southern Tunisia, previously unknown to authorities.

The attack was the third in less than two months that French authorities have attributed to extremists, including the beheading of a teacher who had shown caricatures of the Prophet Muhammad in class after the images were re-published by satirical newspaper Charlie Hebdo. The images deeply offended many Muslims, and protesters burned on French flags, stomped on portraits of President Emmanuel Macron and called for boycotts of French products at demonstrations Friday in Pakistan, India, Bangladesh and Afghanistan.