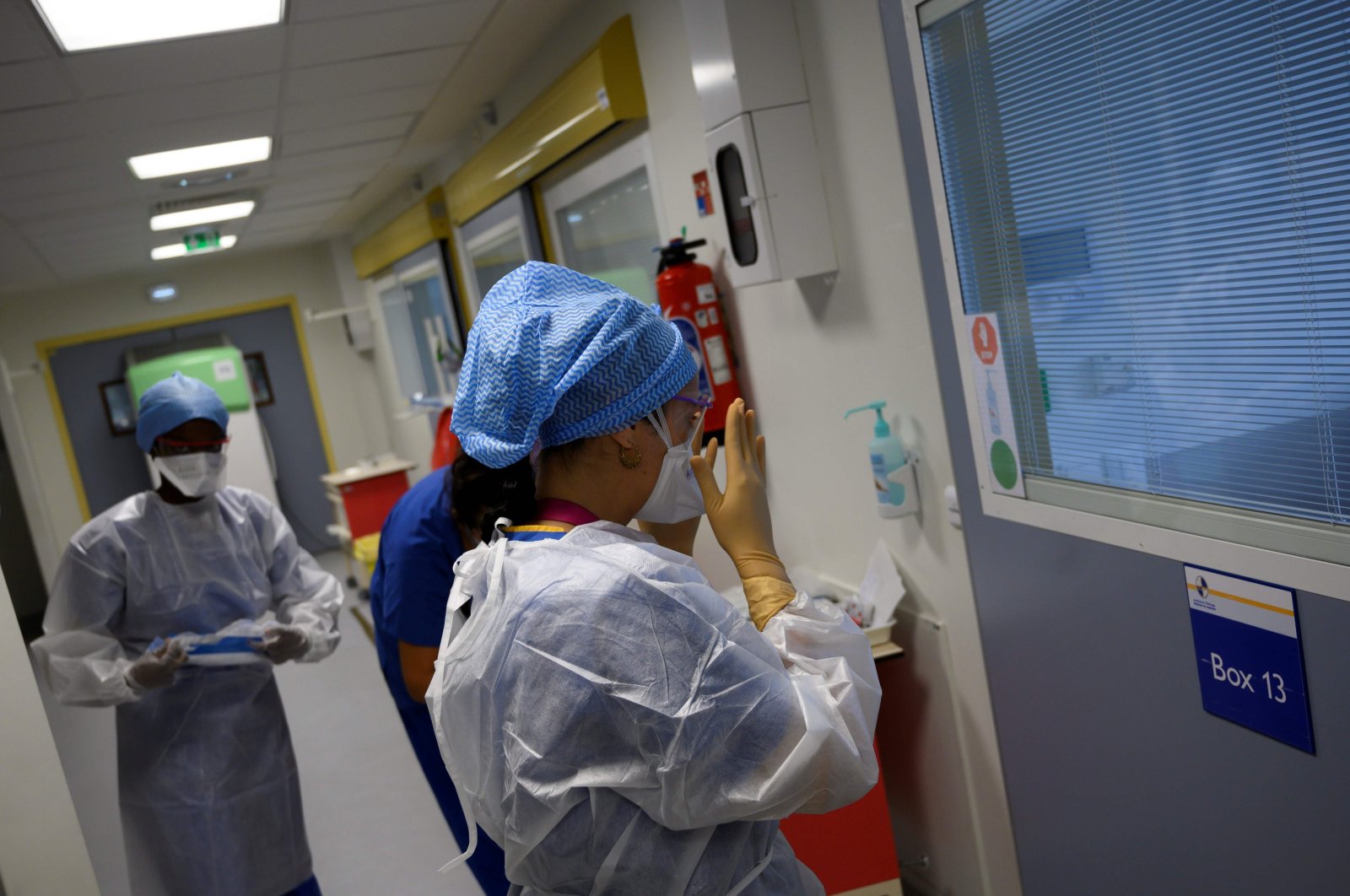 A Nurse gets ready to enter a room where a patient suffering from COVID-19 is hospitalized at the emergency unit of La Timone hospital in Marseille, southeastern France, on Sept. 11, 2020. (AFP Photo)
by French Press Agency - AFP Sep 11, 2020 9:46 pm
RECOMMENDED

French Prime Minister Jean Castex warned Friday the country was seeing a "clear worsening" of the coronavirus pandemic but aimed to avoid a new nationwide lockdown that would hammer the economy.

In an eagerly-awaited statement after a meeting of ministers and health experts, Castex did not announce any new restrictions but promised more efficient testing and said it was up to local authorities to decide additional measures.

Nearly 10,000 new cases have been recorded daily in the last two days, a record since wide-scale testing began, but Castex said a recent increase in COVID-19 hospitalizations was particularly worrying.

"We have to succeed in living with this virus, without returning to the idea of a generalized lockdown," he said in a televised statement from his official residence in Paris.

"Our strategy is not changing. We must fight the virus without putting on hold our social, cultural and economic life, the education of our children and our ability to live normally," he added.

Castex said 42 of France's 101 departments are now classified as "red zones" where the virus is circulating rapidly, up from 28 earlier this week.

He said the authorities in Marseille, Bordeaux and the overseas territory of Guadeloupe should by Monday present plans to deal with significant local outbreaks.

"There is no Maginot Line – inevitably it ends up reaching the most vulnerable," he said in reference to supposedly impenetrable defenses France built ahead of World War II.

But he did not announce any major new restrictions, urging people instead to respect social distancing guidelines and to wear face masks.

And the quarantine period for people who catch the virus will be shortened to just seven days from 14, to better match "the period when there is a real risk of contagion," he said.

Castex also said that testing capacities would be ramped up in response to long wait times for appointments and results.

Priority cases involving people with confirmed exposure to COVID-19 patients or already showing symptoms will be given reserved spots at testing centers and 2,000 more people will be hired to carry out contact tracing.

Officials have been increasingly concerned about the high number of infections in France, even if the death toll and admissions to intensive care are well below the highs recorded in March and April.

The health ministry said 9,406 new coronavirus infections were recorded on Friday after 9,843 were registered on Thursday, the highest number since large-scale testing began.

France's total death toll from the pandemic stands at 30,893 after 40 more people died in the hospital.

The head of a scientific council advising the government on the pandemic, Jean-Francois Delfraissy, said Wednesday that the government might soon have to make "tough" decisions to stem the outbreak.

People at high risk because of old age or health problems including diabetes, obesity and respiratory issues might require a protective "bubble" around them, for example.

Castex himself is in a seven-day period of self-isolation, having spent part of last weekend with the annual men's multiple stage bicycle race Tour de France's race director Christian Prudhomme, who tested positive for COVID-19.

Castex was later deemed virus-free after an initial test.