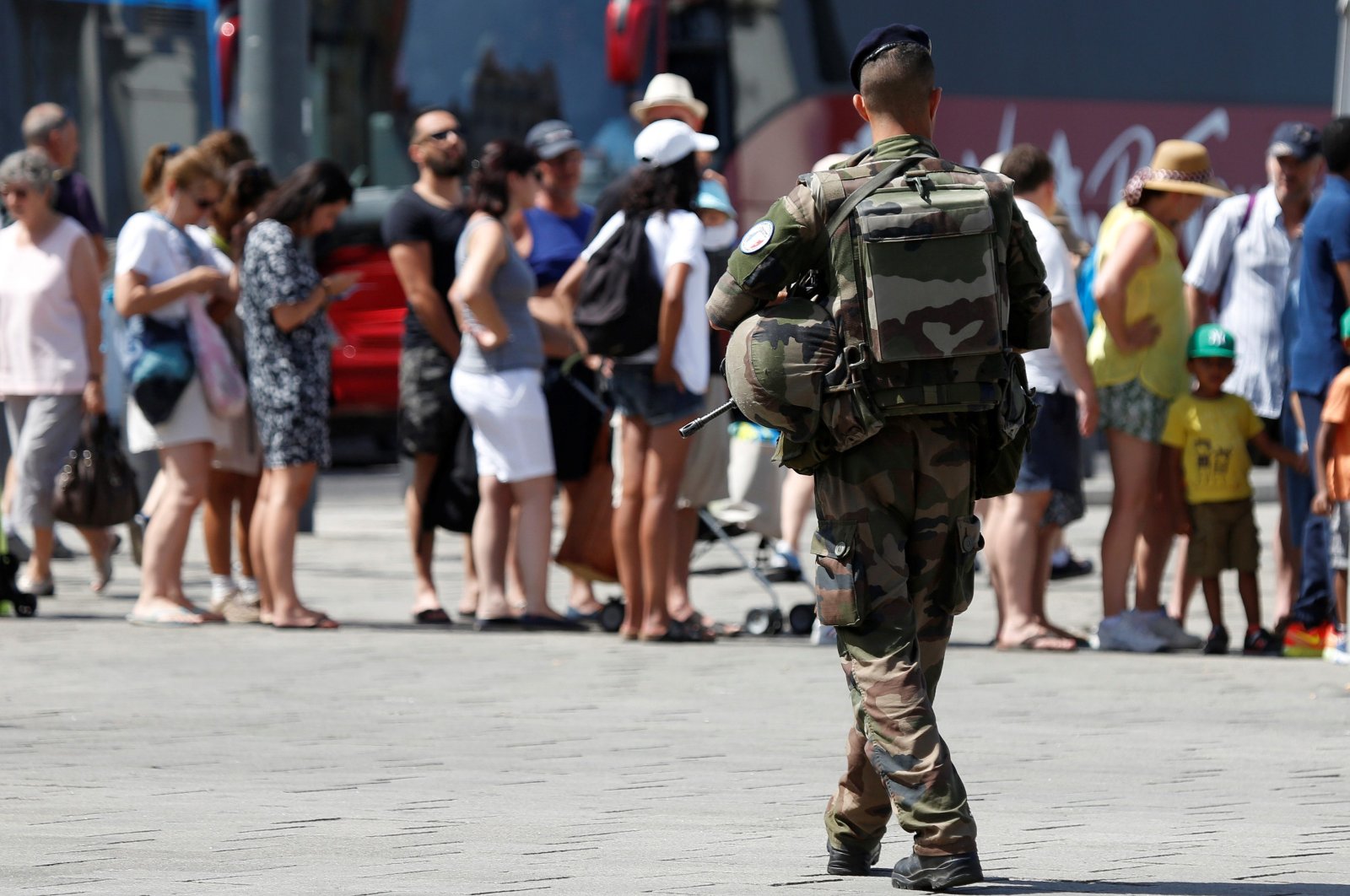 A French soldier patrols at the Old Harbor in Marseille to maintain security after French lawmakers approved a six-month extension of emergency rule within France, July 21, 2016. (Reuters Photo)
by Compiled from Wire Services Sep 23, 2020 4:34 pm
RECOMMENDED

France’s defense minister has admitted to misleading the nation about virus protections for air force personnel who evacuated French citizens from the hard-hit Chinese city of Wuhan and have been suspected of links to France’s first confirmed COVID-19 cluster.

The revelation Tuesday by Defense Minister Florence Parly to a Senate investigating committee is a further blow to the credibility of French President Emmanuel Macron's government as it battles rebounding infections.

Health Minister Olivier Veran is expected to announce new restrictions on gatherings Wednesday as the numbers of virus cases and hospitalizations mount.

As China locked down the city of Wuhan in January, the French government started repatriation flights for French citizens there. One such flight returned to France from Wuhan on Jan. 31, operated by 18 military personnel based in Creil, in the Oise region north of Paris, the defense minister said.

In February, regional health authorities announced a virus cluster in the Oise region and the first cases in France with no clear link to cases in China or Italy. Within weeks, France’s coronavirus case count had skyrocketed and the nation was in lockdown.

With over 31,400 confirmed virus-related deaths, France has the third-highest death toll in Europe after Britain and Italy.

The defense minister told public broadcaster France-2 in March that all the military personnel on that evacuation flight "had been tested and confined” upon return. But as both houses of France’s parliament investigate the government’s handling of the pandemic, doubts were raised about that version of events.

A senator from the Oise region, Olivier Paccaud, pressed Parly about exactly what happened with the military personnel at Creil during a hearing Tuesday.

"Do you maintain that these personnel were tested and confined? Was there not negligence in the way the military personnel were handled on their return from Wuhan?” he asked. "The residents of the Oise want the truth.”

Parly responded: "I said something inexact March 4 on France-2.”

"The crew was subjected to an extremely strict health protocol but which, in fact, did not include tests," she said.

She said there was "probably zero” chance that the air base was at fault for the Oise cluster, noting that regional health authorities later found a possible case that dated to Jan. 14, two weeks before the evacuation flight. She insisted that the air force personnel didn’t stay in Wuhan and had no direct contact with the evacuated passengers.

The worsening coronavirus situation in the country pushes the French government to discuss the possibility of reinforcing local measures in places where viral transmission is high and finding ways to speed up coronavirus test results, which can take up to a week as the country reported over 10,000 new daily infections Tuesday with 78 deaths.

But there are concerns about people flouting advice to keep a safe social distance, especially among young people. They have been gathering in large groups, often maskless, at bars and cafes in the capital and elsewhere.

With more than 507,000 confirmed cases and over 31,400 deaths to date, concern about hospital capacity to handle a new infection wave is also growing, as admissions have started to rise again after being contained during France's March-May lockdown.