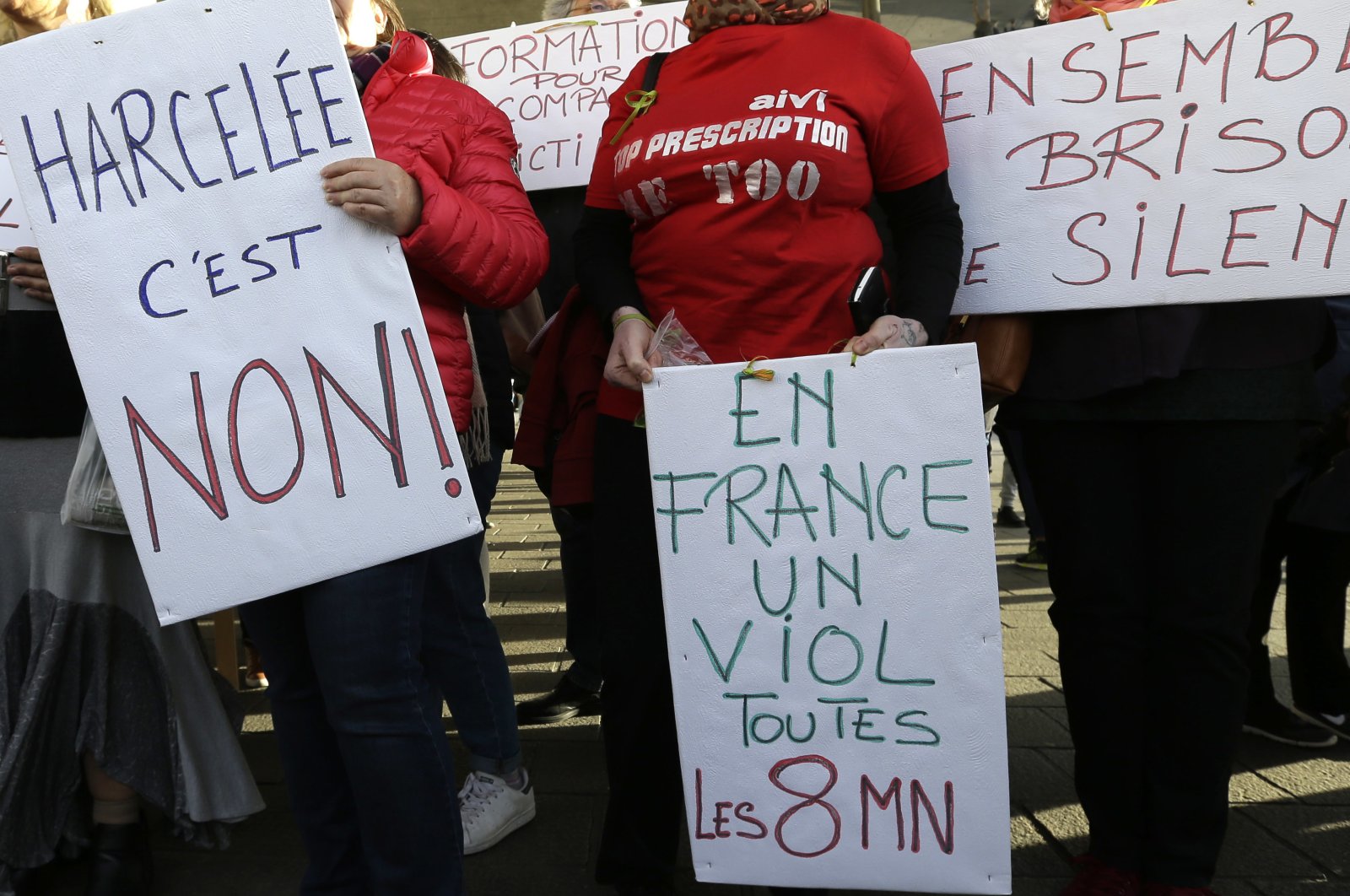 A demonstrator holds placard reading "Harassed it is no," "In France a rape every 8 minutes" and "Together let us break the silence" during a demonstration in Marseille, France, Oct. 29, 2017. (AP Photo)
by ASSOCIATED PRESS Oct 24, 2021 2:39 pm
RECOMMENDED

One rape victim was asked by Paris police what she wore that day, and why she didn’t struggle more. Another woman was forced to fondle herself to demonstrate a sexual assault to a skeptical police officer.

They are among thousands of French women who have denounced in a new online campaign the shocking response of police officers victim-blaming them or mishandling their complaints as they reported sexual abuse.

The hashtag #DoublePeine (#DoubleSentencing) was launched last month by Anna Toumazoff after she learned that a 19-year-old woman who filed a rape complaint in the southern city of Montpellier was asked by police in graphic terms whether she experienced pleasure during the assault.

The hashtag quickly went viral, with women describing similar experiences in Montpellier and other police stations across France. French women’s rights group NousToutes counted at least 30,000 accounts of mistreatment in tweets and other messages sent on social media and on a specific website.

Despite recent training programs for French police and growing awareness around violence against women, activists say authorities must do more to face up to the gravity of sex crimes, and to eradicate discrimination against victims.

Addressing the national issue last week, Interior Minister Gerald Darmanin said "there are questions that cannot be asked to women when they come to file a complaint.”

"It’s not up to the police officer to say whether there was domestic violence or not, that’s up to the judge to do," he added. He also announced an internal investigation at the Montpellier police station.

The prefect of the region of Montpellier had previously condemned in a statement what he called "defamatory comments” against officers. He denounced "false information” and "lies” aiming at discrediting police action. Toumazoff denied launching an anti-police campaign, saying the hashtag aims at urging the government to take action.

"By letting incompetent and dangerous officers working in police stations, (authorities) expose the whole profession to shame,” she told The Associated Press (AP). She said the victim mentioned in her initial tweet does not wish to speak publicly while her rape complaint is under investigation.

"While police officers understand the victims’ distress, the establishment of the truth requires us to ask ‘embarrassing’ questions,” it said.

A 37-year-old Parisian woman told the AP about her experience at a police station after she was assaulted this year by a man living near her home, who had previously harassed her in the street. Once, he blocked her path and pressed her against a wall, touching her belly and her breast and threatening to kill her, she recalled.

The woman described arriving scared and crying at the police station, where officers welcomed her "very kindly.” But then, she said, the officer in charge of filing the complaint did not write down her description of the assault, so she refused to sign the document.

The officer asked if she was certain that the abuser wanted to touch her breast.

"I had to make the gesture so that he sees that it was not another part of the body,” she said. "Making me repeat and ... mime the gesture in front of a wall, that’s humiliating. I found it very degrading. I felt I was like a puppet.”

The case is still ongoing. Police suggested a change of apartment to move away from her abuser, she said. Another Parisian woman, aged 25, said she was left "traumatized” by the police treatment after she had been raped by her ex-boyfriend in 2016.

When she filed her initial complaint, the police officer, who had received special training, "explained to me why he was asking all these questions, he was in a spirit of kindness,” she remembers. "I felt rather safe and that he believed me.”

Months later she was summoned to another police station, located in the same street where her attacker was living. Feeling very anxious at the idea of potentially seeing him, she said she was talked to as if she was "stupid” and "a liar.”

Police asked what she was wearing that day, why it was different from when she was having consensual sex with him, how she could argue she was surprised if he was wearing a condom, she recalled. An officer told her, "I don’t understand why you did not struggle more.”

The complaint was closed without follow-up due to lack of evidence. The young woman described the police response as very difficult to live through, with a "huge impact” on her private life and almost leading her to giving up her studies. The AP typically does not name people who say they are victims of sexual assault.

Speaking to lawmakers at the National Assembly, the interior minister acknowledged things "can still be improved” on the matter across France. The government has set the goal to have at least one specially trained officer in each police station for dealing with domestic violence and sexual abuse. An annual survey led by national statistics institute INSEE shows that currently only 10% of victims in these cases file a formal complaint.

The #doublepeine movement comes after the shocking killing earlier this year of a woman who was shot and set on fire in the street by her estranged husband. One of the officers who had taken her domestic abuse complaint a few months earlier had recently been convicted for domestic violence himself.

Darmanin promised that officers definitively convicted for such acts won’t be allowed to be in contact with the public anymore. Women have been raising the alarm for years, Toumazoff said, denouncing announcements by politicians not followed by action.

"When there are urgent situations, like terror attacks, they can do things because it’s urgent,” she said. "It’s the same here. Women’s lives are at stake. It's urgent every day.”