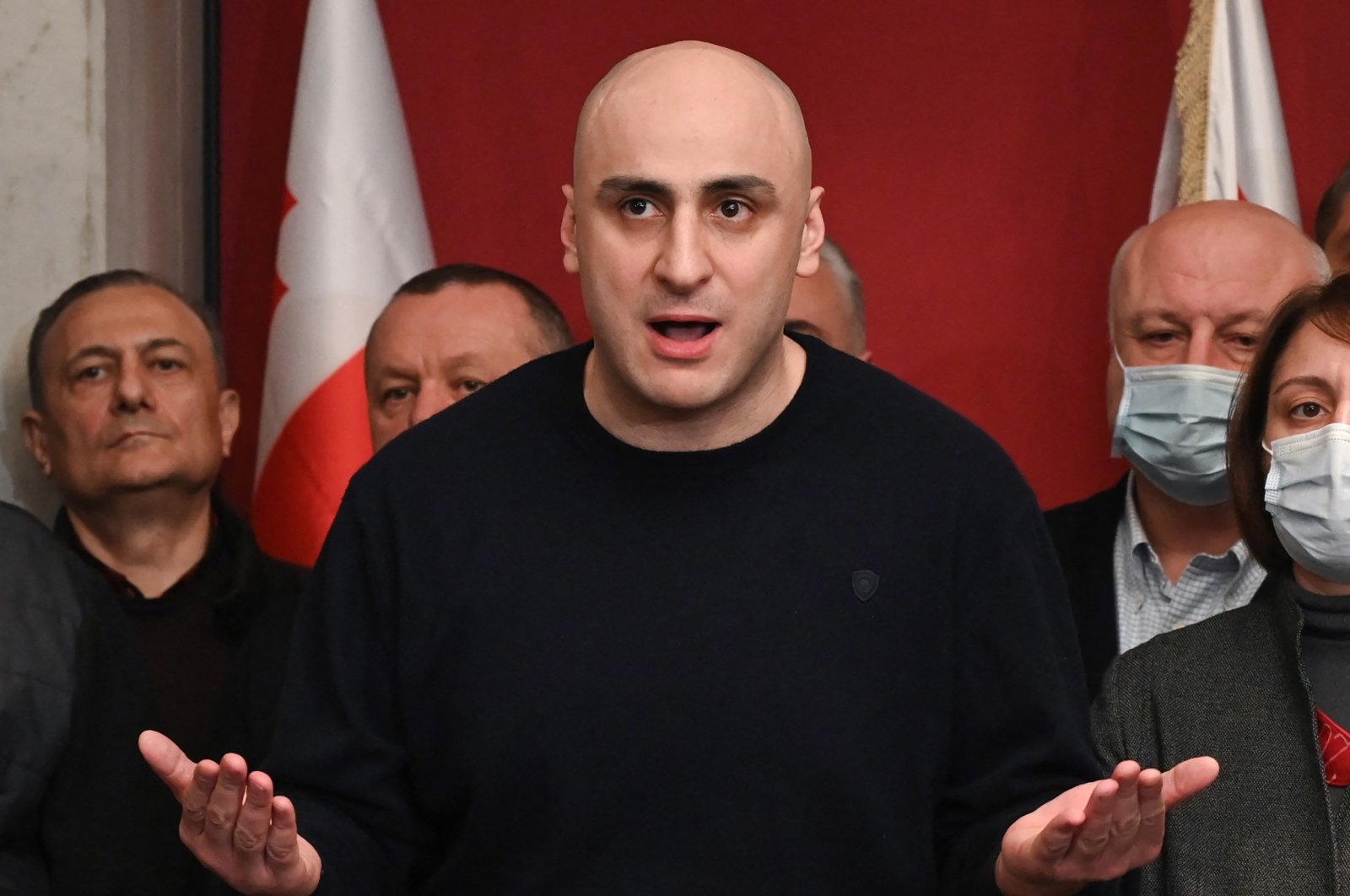 Nika Melia, one of the leaders of exiled former president Mikheil Saakashvili's United National Movement (UNM), holds a briefing at the UNM headquarters in Tbilisi on Feb. 17, 2021. (AFP Photo)
by DAILY SABAH WITH AGENCIES Feb 23, 2021 11:11 am
RECOMMENDED

Georgian police stormed the party offices of opposition leader Nika Melia and detained him early on Tuesday, days after the prime minister resigned following a disagreement over whether to take the prominent politician into custody.

Footage from inside United National Movement (UNM) offices published by the Sputnik Georgia media outlet showed Melia barricaded inside a room with some of his supporters, while opposition activists clashed with police on the street. The special forces also used tear gas. The footage showed that many of those present needed medical assistance.

According to Sputnik Georgia, numerous ambulances and patrol teams were mobilized near the office where the clashes took place. The agency reported that special forces "rushed into the room where Melia was and detained him."

"We call on both the representatives of political parties and their supporters to protest in a peaceful manner, to refrain from violent actions and not interfere with the court's decision," Sputnik Georgia quoted the interior ministry as saying, referring to the order to have Melia detained.

The arrest of Melia aggravates the political tensions that have been rising since the October parliamentary election that the opposition is demanding be rerun. The move by police came hours after parliament named a new prime minister, whose predecessor opposed arresting Melia because of concerns that it would escalate the country's political crisis.

Melia faces charges of inciting violence during protests in 2019. He had been released on bail and ordered to wear an electronic bracelet. But the bail was raised by 40,000 lari ($12,000) in November after he removed the bracelet; he refused to pay the additional bail. Georgian news reports say about 20 other people were arrested in the police action at the opposition headquarters.

Giorgi Gakharia, who stepped down on Feb. 18, said his decision had been prompted by a disagreement with his own team over the order to detain Melia. He had said that Melia's detention was unacceptable if it threatened to fuel political divisions in the South Caucasus country of 3.7 million people.

"Unfortunately, I could not reach a consensus with my team on this issue. I decided to resign," the prime minister said, according to remarks carried by The Associated Press (AP). "It is inadmissible to enforce a judiciary decision... if that poses a risk to the health and lives of our citizens or creates the possibility of a political escalation in the country."

Following Gakharia’s announcement, Georgia's interior ministry issued a statement saying they have temporarily postponed detaining Melia. Melia said Gakharia's decision was "to be respected" but was unlikely to defuse political tensions in the country and called for an early parliamentary election.

One day after resignation Georgian police clashed with opposition activists. Authorities detained 10 people who had gathered in front of the parliament building and tried to set up tents, RIA Novosti news agency reported Friday.

"Ten people were detained for disobeying police demands," the country's interior ministry said in the statement.

On Friday, Georgian opposition parties asked authorities, represented by the ruling Georgian Dream party, to return to the negotiating table to resolve the political crisis in the country.

"We are ready to start a dialogue with the Georgian Dream as soon as possible, and this dialogue should end with the start of a reset in the country and the holding of elections," said the leader of the Lelo for Georgia party Mamuka Khazaradze.

The country's new Prime Minister Irakli Garibashvili, who was confirmed by parliament Monday, said in an address to lawmakers his government would proceed with Melia's arrest, saying the politician "will not manage to hide from justice," as Agence France-Presse (AFP) reported.

Garibashvili is a loyal lieutenant of the powerful oligarch Bidzina Ivanishvili who is widely seen as the man in charge in Georgia, despite having no official political role. Analysts said the spiraling political crisis in Georgia is fraught with serious consequences for the fledgling democracy and is unlikely to be resolved without a greater diplomatic engagement from Tbilisi's Western allies.

"The establishment of the Ivanishvili-Garibashvili dictatorship in the country will be a great shame. Stand up for the future of your children," said ex-speaker of parliament, now a representative of the opposition, Nino Burjanadze.