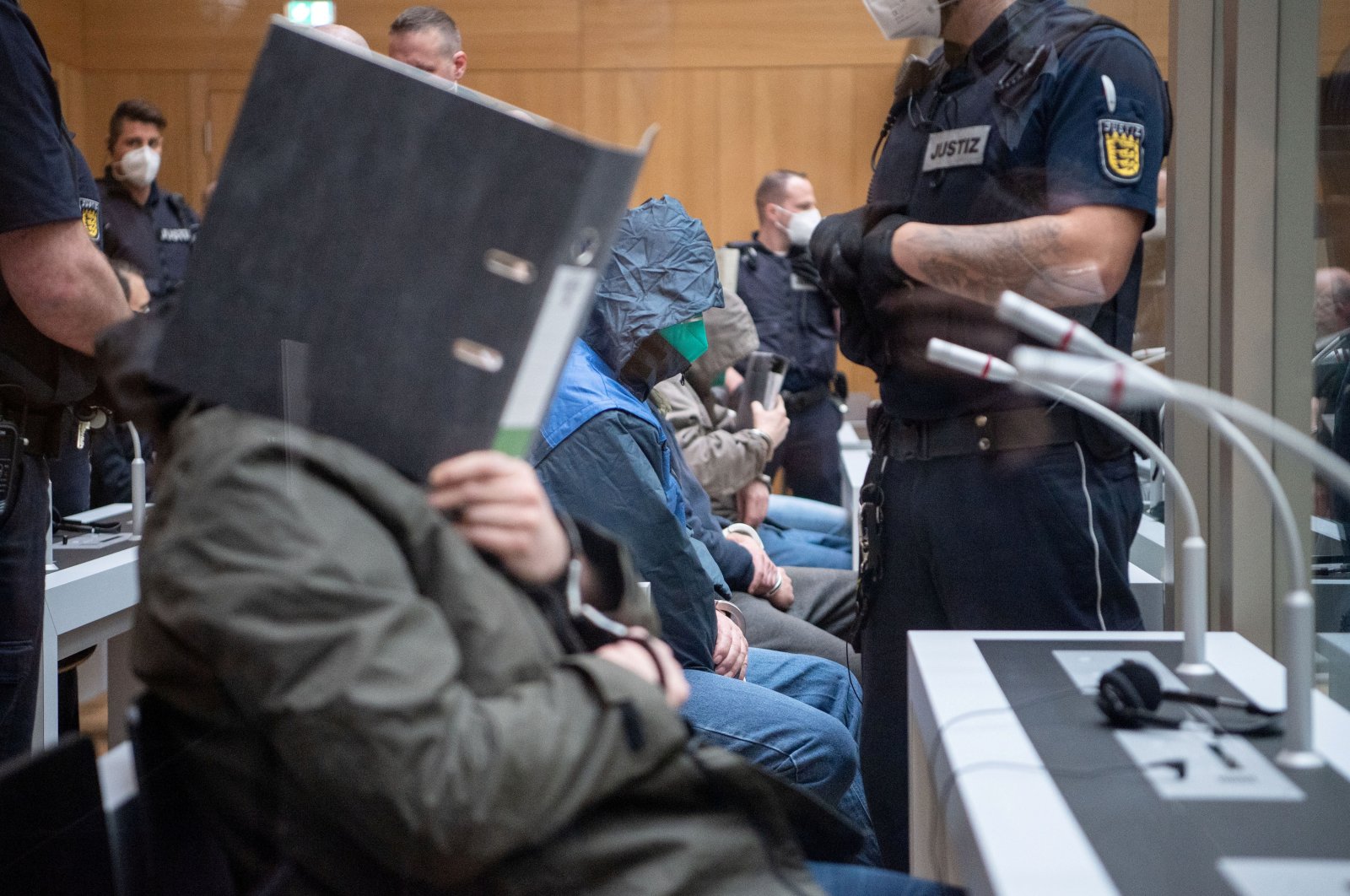 A defendant covers his face at the beginning of a trial against 11 Germans charged with belonging to a far-right organization, that prosecutors say aimed to attack mosques, at a higher regional court in Stuttgart, Germany, April 13, 2021. (Reuters Photo)
by French Press Agency - AFP Apr 13, 2021 5:21 pm
RECOMMENDED

A high regional court in Germany's Stuttgart began on Tuesday the trial of 12 alleged far-right conspirators accused of terrorism and charged with attacks on politicians, asylum seekers and Muslims as part of a plot to hinder the democratic rule of Germany.

Arrested in February last year, 11 of the men, stand accused of membership of a terrorist organization and weapons law violations. The 12th has been charged with supporting a terrorist group.

The suspects, known as Gruppe S (Group S) after one of the founders, planned to spark "a civil-war-like situation" by carrying out "attacks on politicians, asylum seekers and people of Muslim faith," according to federal prosecutors.

The group's eight founding members had the goal of "destabilising and ultimately overthrowing" Germany's democratic order, they said.

Those on trial, aged 33 to 62 and all German citizens, had an "openly National Socialist attitude," referring to the Nazi party, and made no secret of their hatred of foreigners, Muslims and Jews, according to prosecutors.

One of them is accused of using an offensive slur against black people and calling them "subhumans, so up for a massacre" in a Telegram chat group.

When talking on the phone, they are said to have used code words for weapons such as "battery" and "bicycle."

Investigators say the two main ringleaders of the group, named only as Werner S. and Tony E., organized three meetings where members took part in discussions and shooting exercises.

The group is said to have arranged to buy weapons worth 50,000 euros ($60,000) through a handler known to one of the members, and several other weapons were found during raids when the arrests were made.

The group had links to several right-wing extremist networks and are accused of using their connections to recruit members "whom they considered to be fast, clever and brutal fighters."

They were also planning attacks against politicians including Robert Habeck, one of the co-leaders of Germany's Green party, according to prosecutors.

The trial in Stuttgart comes as concern grows in Germany over the rise of violent right-wing extremism.

The number of crimes committed by far-right suspects in Germany jumped to its highest level for at least four years in 2020, according to provisional police figures released in February.

A series of high-profile attacks have also rattled the country. In January, German neo-Nazi Stephan Ernst was sentenced to life in prison for murdering pro-migration politician Walter Luebcke.

In February 2020, a far-right extremist killed 10 people and wounded five others in the central German city of Hanau.

And in 2019, two people were killed after a neo-Nazi tried to storm a synagogue in Halle on the Jewish holiday of Yom Kippur.

The Gruppe S trial is taking place under high security at Stammheim Prison in Stuttgart and is due to wrap up in August.