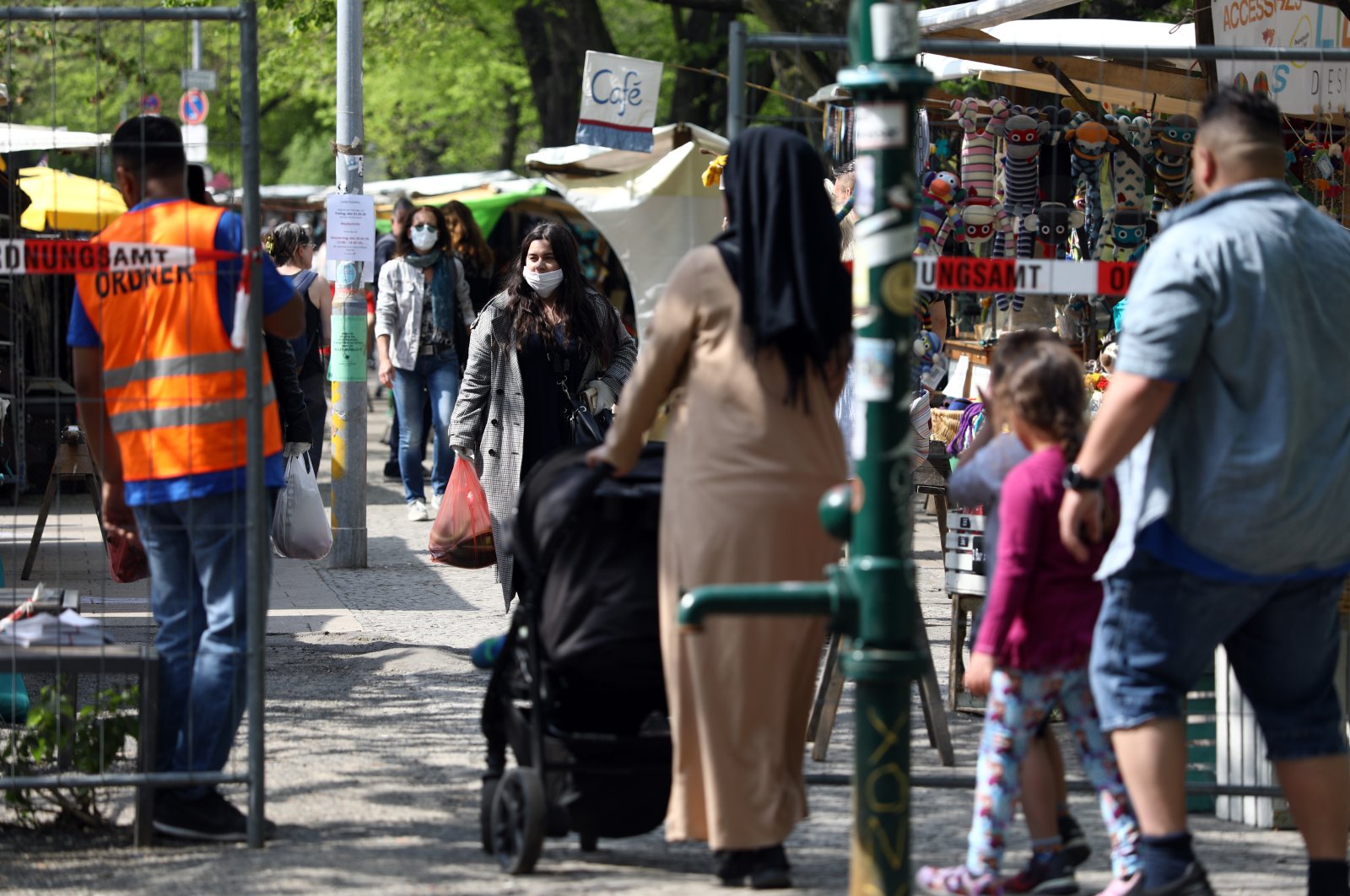 A steward regulates the access to a market at the Maybachufer in compliance with the current distance regulations, as the spread of the coronavirus disease (COVID-19) continues in Berlin, Germany, April 28, 2020. (Reuters Photo)
by REUTERS Apr 28, 2020 4:33 pm
RECOMMENDED

Germany's coronavirus infection rate has edged up from earlier this month and people should stay at home as much as they can despite a lockdown relaxation last week, the head of the Robert Koch Institute for infectious diseases said on Tuesday.

The virus reproduction rate, dubbed 'R,' is now at 1.0 in Germany, said Lothar Wieler, president of the Robert Koch Institute. That means one person with the virus infects one other on average. Earlier this month, the rate was at 0.7.

The education ministers of Germany's 16 federal states agreed on Tuesday that schools across the country would slowly reopen classes for all grades until the summer holidays, although pupils would have to work and learn in smaller groups.

This means that most children will only be allowed to go to schools in rotating shifts and not on a daily basis.

"There will be no regular classes before the summer holidays," said Stefanie Hubig, head of the ministerial council for education.

Retailers with floor space of up to 800 square meters are now allowed to open, along with car and bicycle dealers, and bookstores, though they must practice strict social distancing and hygiene rules.

German retailers sought on Tuesday to persuade the government to let all stores operate normally from May 4, saying customers had not stormed back into the smaller shops that were allowed to reopen and were behaving prudently.

Merkel will discuss the next steps for the easing of lockdown restrictions in a telephone conference with the state premiers on Thursday.

But a government spokesman on Monday already tried to lower expectations ahead of the talks, saying a meeting on May 6, when Merkel and state premiers are scheduled to discuss progress again, was more likely to yield important decisions.

Wieler said Germany has, compared to other countries, been successful so far in restricting the spread of the virus.

"Against the background of the easing (of restrictions), let's ensure we can continue to defend this success we have achieved together," he told a regular news conference. "We don't want the number of cases to rise again."

"Let's, insofar as is possible, stay at home, let's stick to the reduced contact."

Academics have suggested public life may gradually return to normal if certain conditions are met, including the 'R' rate, stabilizing at a low level.

"The number should stay below one, that is the big goal," Wieler told the news conference.

"The further it is below one, the more secure we can feel, the more leeway we have, but there are other numbers that are also important," he said, adding that these included the number of cases per day, and testing capacity.

Chancellor Angela Merkel, who will review the restrictions with state leaders on Thursday, urged Germans last week to show endurance and discipline to get through the coronavirus pandemic that she said is "still at the beginning."