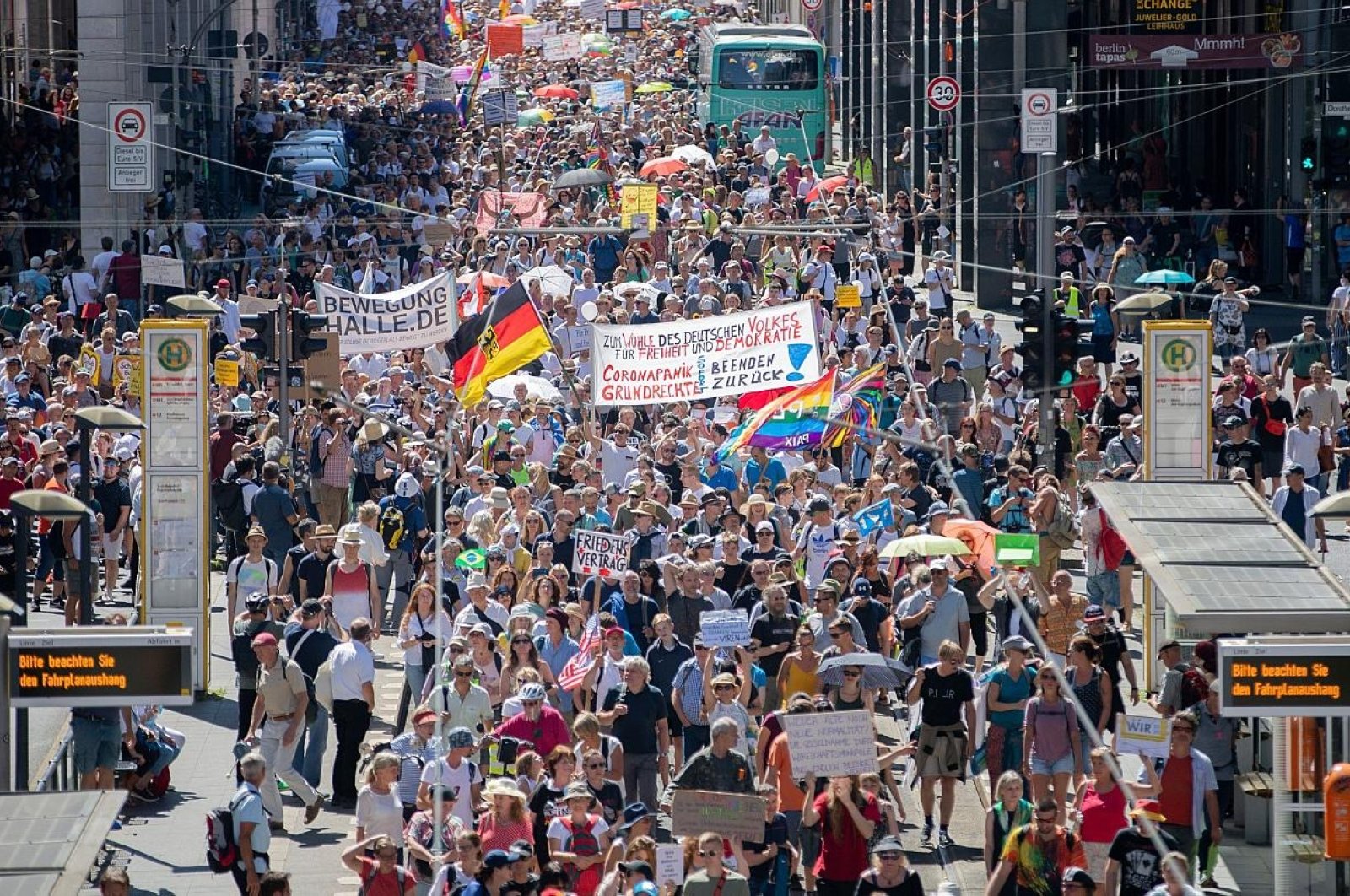 A mass rally against coronavirus measures will not take place in Berlin as planned on Saturday after authorities banned the event and a number of other demonstrations due to concerns that participants would again flout hygiene rules.

Assurances that participants would wear masks were not enough to convince local authorities that the events could safely go ahead, according to a statement posted on the state government's website.

It referred to a mass demonstration staged on Aug. 1 by a broad alliance of people who oppose the restrictions and hygiene measures put in place to contain the pandemic.

That event attracted some 20,000 people in central Berlin, according to police, although organizers claimed that up to 1.3 million people took part.

Police broke up the rally because many participants were seen without masks and not keeping the required distance from one another.

The organizers had planned another demonstration for Saturday, under the banner "Assembly for Freedom." It was also to take place on Berlin's Strasse des 17 Juni, a central avenue that bisects the city's Tiergarten park.

The Stuttgart-based initiative Querdenken 711 (Lateral Thinking 711) had registered the protest, with 17,000 participants expected at the march and 22,500 at a subsequent rally.

Referring to the decision to ban the event, Berlin state interior minister Andreas Geisel said, "This is not a decision against the freedom to assemble, it is a decision for protection against infection."

He stressed that Germany and its capital "are still in the middle of the pandemic with rising infection numbers" and slammed the organizers for having deliberately broken the rules earlier in the month.

"Such behavior is unacceptable," he said in the statement, adding that police would act to prevent large gatherings from forming on Saturday.

"I am not prepared to accept a second time when Berlin is misused as a stage for coronavirus deniers, Reichsbuerger (activists who question the legitimacy of the modern-day German state) and right-wing extremists," Geisel said.

Querdenken 711 responded Wednesday by saying it would take legal action against the move.

Organizer Michael Ballweg accused Geisel of acting not for public health reasons, but because of "the mindset of the participants."

Germany has seen a rise in coronavirus cases in recent weeks following the lifting of restrictions on social gatherings and the relaunch of travel within Europe.

On Wednesday, the country's official caseload rose by 1,576 to reach 236,429, according to the Robert Koch Institute (RKI) for disease control. It reported a death toll of 9,280, an increase of three from the previous day.

On Saturday, the number of daily new coronavirus cases surpassed the 2,000 mark for the first time in Germany since late April.

Sweeping restrictions on industry and public life have been replaced with rules making masks mandatory in shops and on public transport. Meanwhile, social distancing is still encouraged.

But the measures have angered people who consider the threat of the virus to be overblown.

More extreme critics have unfounded conspiracy theories, including that efforts to develop a vaccine are part of a concerted bid to control the population.

On Wednesday, organizers of a pop concert featuring Canadian singer Bryan Adams and German pop star Sarah Connor with up to 13,000 guests – whose original date of Sept. 4 had raised eyebrows – said the Dusseldorf event would be postponed until later in the year due to rising infection rates.