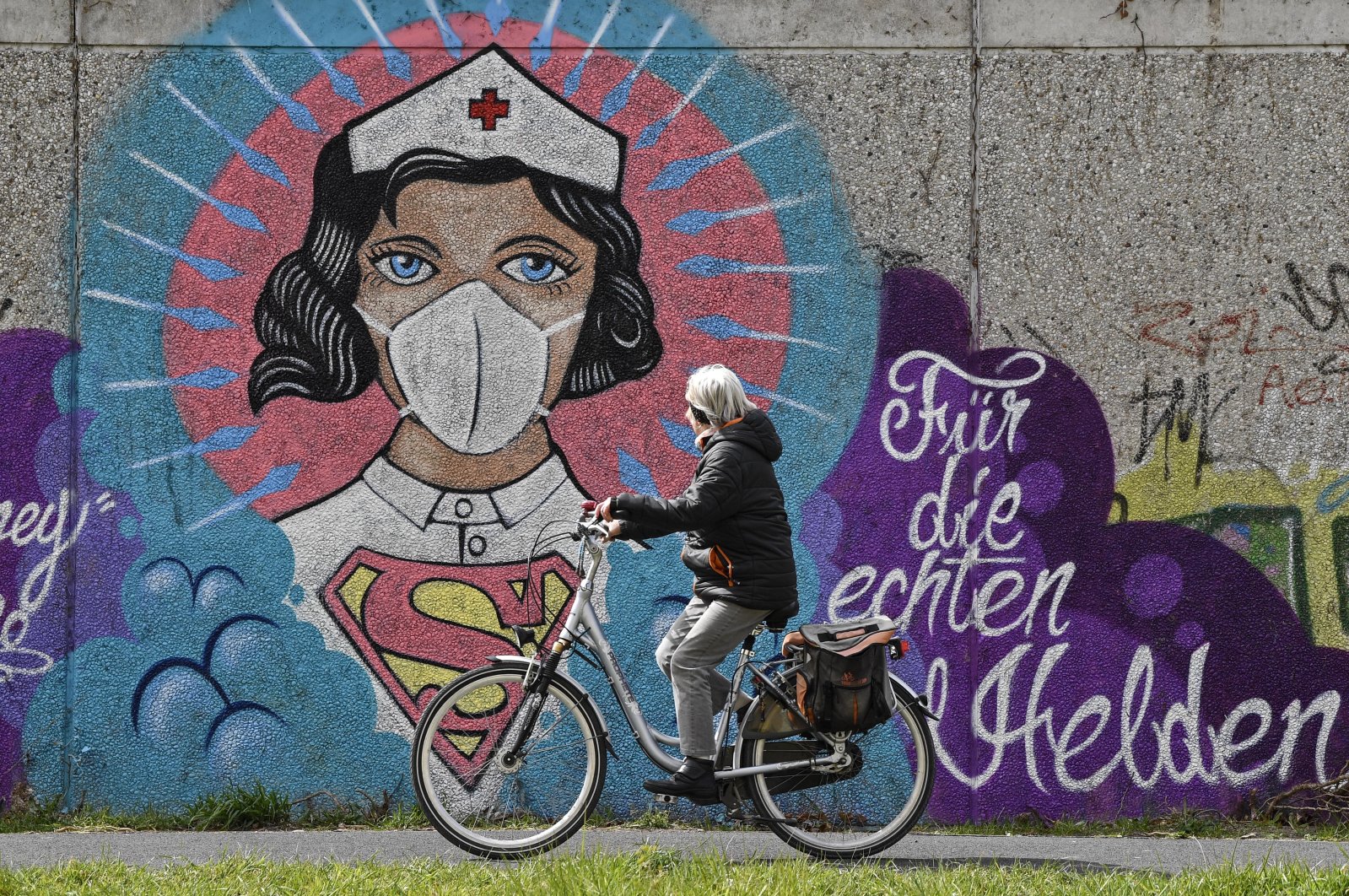 A woman on a bicycle passes a coronavirus graffiti by street artist 'Uzey' showing a nurse as Superwoman, the lettering reads "for the real heroes" on a wall in Hamm, Germany, on Easter Monday, April 13, 2020. (AP Photo)
by REUTERS Apr 13, 2020 3:18 pm
RECOMMENDED

Public life in Germany, halted by the coronavirus outbreak, may gradually return to normal if certain conditions are met, including an infection rate stabilizing at a low level, according to recommendations sent to Chancellor Angela Merkel and state governors on Monday.

The suggestions by the National Academy of Sciences Leopoldina will play a prominent role in considerations this week for a possible loosening in movement and social distancing rules in place since around mid-March.

The advice from the academics comes as the daily figure for new infections in Germany has slowed but is still in the thousands of people.

"Although the pandemic will continue to shape economic and social life for months to come, it is necessary to develop criteria and strategies for a gradual return to normality," the academy wrote.

Merkel, who has said the academy's position paper will be important for her determination on the path forward, will discuss the recommendations with her cabinet Tuesday.

On Wednesday, she will hold a video conference with the state governors to discuss a possible path out of the lockdown and how to manage the recession it is expected to cause.

Senior politicians have begun debating a potential easing of restrictions as the number of new infections and deaths declines in Germany, which has weathered the pandemic better than Italy, Spain and France.

But the export-driven economy – Europe's largest – has been hit hard and may contract 9.8% in the second quarter, its top economic research institutes said. That would be the biggest contraction since records began in 1970 and more than double the decline seen during the global financial crisis in 2009.

The academy also said that masks should be obligatory in certain areas, such as on public transport. It said children should return to school as quickly as possible, but recommended differentiating them by grade level.

Over the Easter weekend, Armin Laschet, the conservative governor of the most populous state of North Rhine-Westphalia, sent recommendations from an expert panel from his own state to Merkel and his fellow premiers. He has stressed the importance of easing restrictions.

Speaking to broadcaster ZDF on Sunday evening, Laschet said that small retailers, for example, could potentially reopen following the model in place for bakeries with only two customers at a time.

"Why shouldn't this also work for other shops," he said, calling for "a responsible return to normalcy."

Other politicians, like Dietmar Woidke, governor of Brandenburg, have called for a more cautious approach to avoid the risk of negating the work Germany has done to combat the virus.

The current restrictions, which include limiting public gatherings to two individuals, are to remain in place until April 19.

Germany’s number of confirmed coronavirus infections has risen by 2,537 to 123,016, data from the Robert Koch Institute (RKI) for infectious diseases showed on Monday.

That was lower than a 2,821 increase reported on Sunday and marked the third decline after four days of increases.