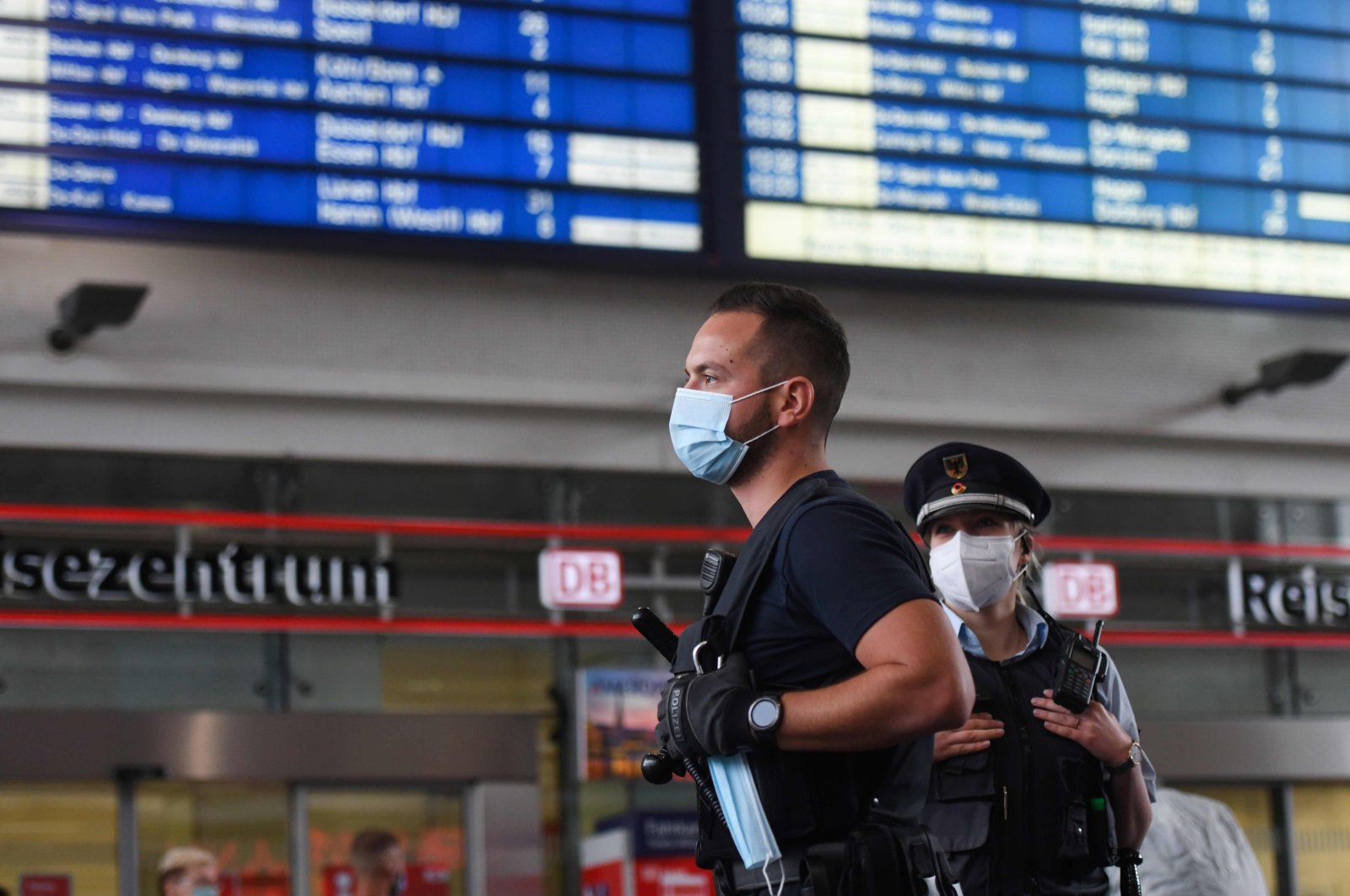 Employees of the public order office and the federal police patrol to control that commuters respect the obligation to wear a mask on August 24, 2020 at the main railway station in Dortmund, western Germany, amid the new coronavirus pandemic. (AFP Photo)
by German Press Agency - DPA Sep 19, 2020 5:41 pm
RECOMMENDED

Germany's national disease control agency recorded an increase in coronavirus infections of 2,297 Saturday, the highest in a 24-hour period since April.

The increase is still far from the levels seen at the country's peak in late March when more than 6,000 cases were being confirmed daily.

Daily infection rates fell during the summer but started increasing again in July, and spiked above 2,000 one day in August.

Since the outbreak reached Germany, 270,070 people have been infected with the virus, according to the government's Robert Koch Institute (RKI).

Six people died of COVID-19, the disease caused by the virus, during the last 24 hours, bringing Germany's death toll to 9,384.

Some 239,800 people have recovered from the virus, according to the RKI.

The reproduction value, which measures how fast the virus is spreading, is currently at 1.16 in Germany, the RKI said in its report on Friday, up from 1.07 the day before. That means that on average each infected person passes the virus on to more than one other person.

When assessed over the past seven days, the R-value, as the rate is known, was 1.21, up from 1.15 the day before. That rate is considered more reliable as it is less subject to daily fluctuations.

"At the moment, our health system is coping well with the situation, but the trend in Europe is worrying," Health Minister Jens Spahn said in a tweet.

Spahn called on the public to follow the hygiene regulations, by maintaining distance from others and wearing a mask in shops and on public transport.

His statement about the health-care system echoed virologist Hendrik Streeck who said that Germany is currently well able to manage the pandemic and that a nationwide lockdown was not needed, in comments to Handelsblatt, a business newspaper, last week.

However, the RKI said the proportion of infected people in the older population is currently on the rise.

"If the currently observed trend continues and older people continue to be infected, a resurgence in hospitalizations and deaths must be expected," the institute wrote.

Cases are currently increasing throughout Europe, and France reported a record rise of 13,215 new infections in the past 24 hours Friday.

Germany is not planning border controls or entry restrictions, however, as were introduced at the outset of the pandemic.

The health minister's guidance came hours after police in Berlin closed down several parties attended by hundreds of people on Friday night.

Up to 100 officers were on duty in the capital, where police broke up a party in Mitte, attended by 600 people, where fighting then broke out.

Police also cleared gatherings in other parts of the city and one officer was injured.

By the end of the night, officers had arrested seven suspects and initiated charges for assault, dangerous injury and attempting to free someone under arrest.