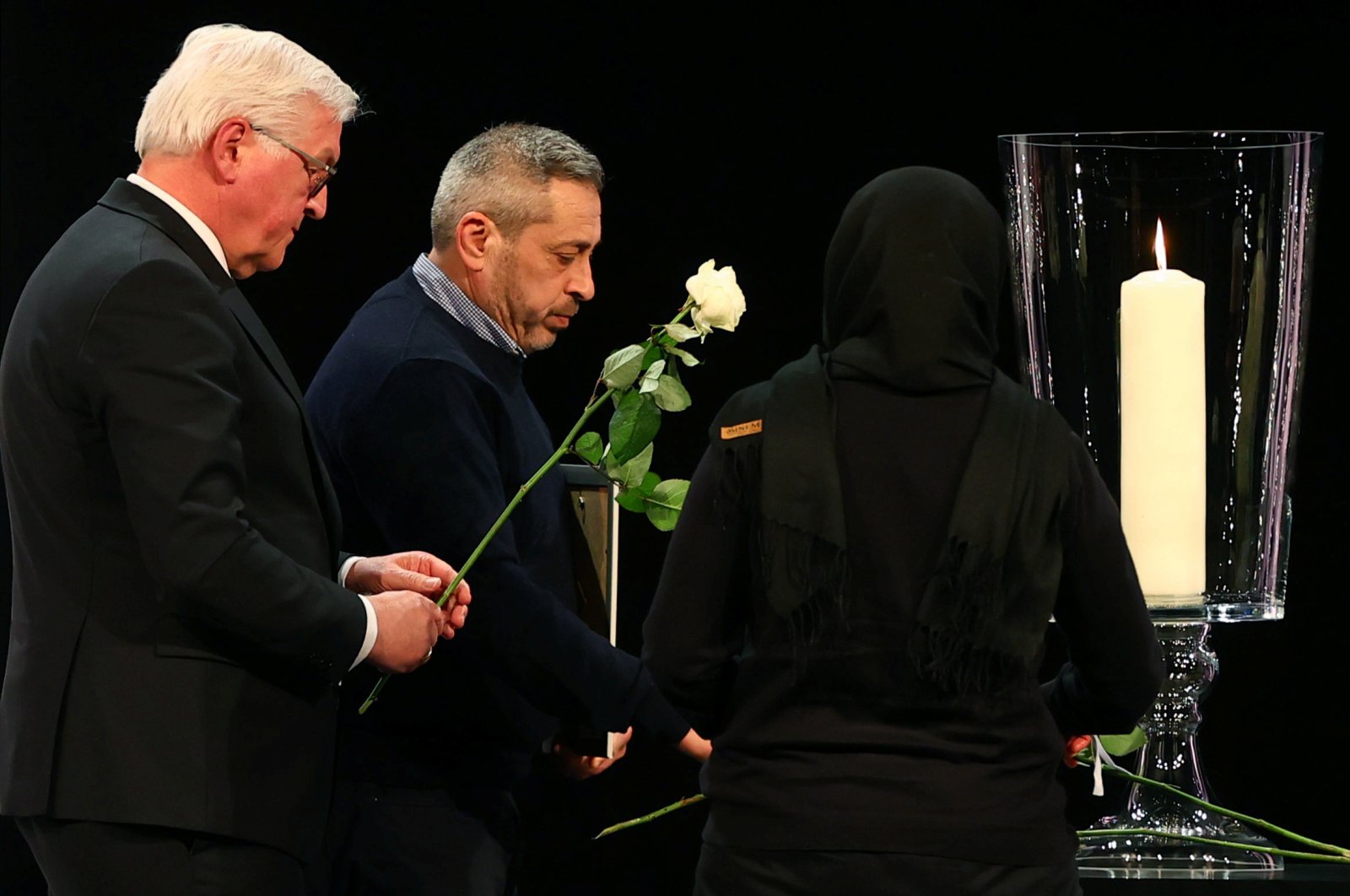 German President Frank-Walter Steinmeier on Wednesday called on all Germans to defend democracy two weeks after a gunman killed nine people in a racially motivated terror attack in the city of Hanau, near Frankfurt.

Speaking at a memorial service for victims also attended by Chancellor Angela Merkel, Steinmeier said that Germans should not take fundamental values, freedom and peace for granted.

"Democracy does not live because the constitution decrees it," Steinmeier said. "It lives and remains, if we want it and engage in it, against those that question it or fight it," he added. "We must defend it actively. We, the state, I."

Steinmeier's comments came two weeks after a 43-year-old German man targeted shisha bars in Hanau in a gun rampage on Feb. 19. He killed nine people of foreign descent and injured another five. The gunman then returned home where he shot his 72-year-old mother before turning the gun on himself.

In his comments on Wednesday, Steinmeier acknowledged Germany had a problem with racism and Islamophobia.

"Yes, there is racism in our country, and not only since a few weeks ago," he said.

"Yes, there is widespread Islamophobia," Steinmeier said. Dark-skinned people and women wearing headscarves in Germany are regularly targets of insults and violence, and they have a right to protection by the state, he said.

Everyone has a duty to stand against violence, exclusion and discrimination in their every day lives, he added.

"The silence of the many cannot become an encouragement to the few. That majority must show itself, again and again, in associations, in pubs and in the football stadium," he said.

Yet in the current climate, agitators against democracy were becoming increasingly shameless and more open in their actions.

"It is this climate in which terrorists reach for their weapons and feel justified in murder," Steinmeier said.

Volker Bouffier, Hesse's state premier, said, "We will not let ourselves be divided, and we stand together." The victims were not strangers, he said. He acknowledged that as well as grief and uncertainty, people also felt afraid.

"I can well understand this gear, but it must not prevail," Bouffier said, adding, "We must do everything so that everyone can live without fear."

Ajla Kurtovic, the sister of one of the men killed, gave an emotional tribute at the ceremony. "My brother Hamza was suddenly torn from the heart of our family," she said. "What is left behind is boundless pain, incomprehensible emptiness and bewilderment."

She described her brother as friendly, socially engaged and always ready to help. Kurtovic said she did not feel hatred, but that hate had driven the killer to commit his racist crime and that hate and racism were similar.

She called on people to act together, instead of against one another, and she called on politicians to investigate the crime and to draw lessons from it, so that it would not be repeated, saying "we owe this to those who were murdered."

Kemal Kocek, a local from Hanau who knew many of those who were killed, said: "People forget things quickly, but we must never forget those who died here."

Hanau's mayor, Claus Kaminsky, said the murders would always be associated with the city, saying this caused unending pain, although this could not be compared to the suffering of the victims and the pain of their relatives.

Kaminsky said the city would create a memorial for the victims, who would also be posthumously awarded the city's golden plaque of honor.

In his entry in the book of condolence, Steinmeier invited the relatives of the victims, all of whom are of foreign descent, to a meeting in Berlin. Merkel also wrote in the condolence book.

Relatives and friends of the victims made up a large proportion of the 650 invited guests, according to authorities in Hanau.

Wednesday's service was screened at two open-air locations in Hanau's city center, watched by some 2,000 people, the police estimated.