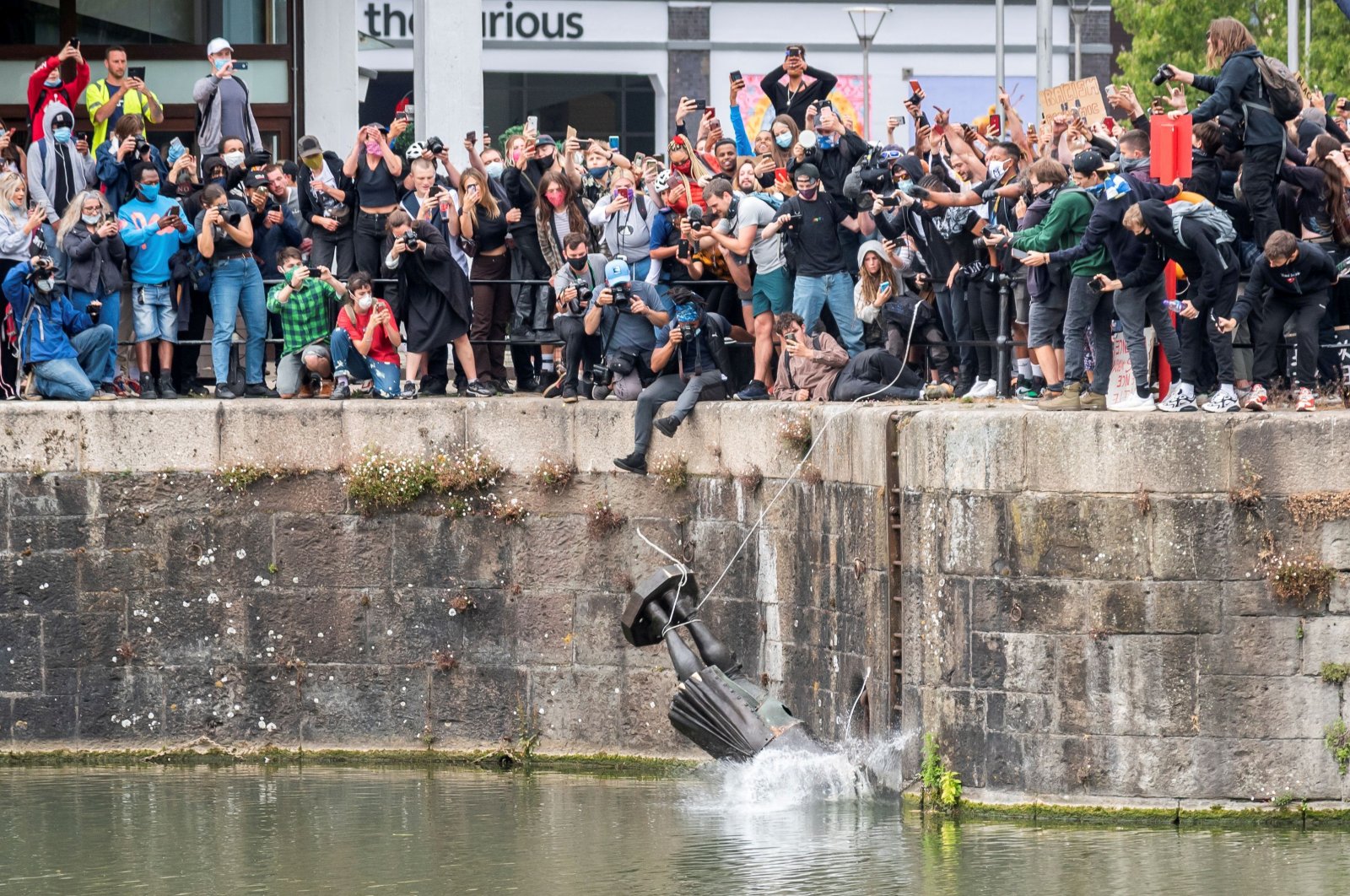 The statue of 17th-century slave trader Edward Colston falls into the water after protesters pulled it down and pushed off a dock, Bristol, June 7, 2020. (REUTERS Photo)
by DAILY SABAH WITH AGENCIES Jun 11, 2020 1:48 pm

A number of monuments with links to colonialism and slavery have either been defaced or pulled down in Europe and the U.S. as protests against racial injustice persist

The protests sweeping the globe after George Floyd's death in the United States have fueled attacks on statues of European colonizers and slavers in many Western countries that have had a role in the slave trade and colonial past.

As protests calling for justice and a reckoning with racial inequality have dominated the U.S., anger has also started to focus on statues of southern Civil War heroes, the Confederate flag and statues of Italian explorer Christopher Columbus, who opened the Americas to European settlement. Among the targets of angst are 10 military bases, including Fort Hood in Texas and Fort Benning in Georgia, honoring generals from the secessionist South, which lost the Civil War and its struggle to preserve slavery.

Columbus, long hailed by school textbooks as the so-called discoverer of "The New World" is considered by many to have spurred years of genocide against indigenous groups. A statue of the navigator standing on a prominent plinth in central Boston was beheaded, police said Wednesday.

Almost 2,400 kilometers (1,500 miles) away in Florida, another memorial at a waterfront park in downtown Miami was defaced as red paint was sprayed on its hands alongside messages that read "Our streets," "Black Lives Matter" and "George Floyd." One protester told the Miami Herald, "That man literally has blood on his hands. Us putting the fist on his chest and the blood on his hands is symbolic."

In Minnesota, protesters on Wednesday tied ropes around the neck of a Columbus statue outside the state Capitol and hauled it down to cheers and applause, images from CBS affiliate WCCO showed. At least a couple of protesters ran to the fallen statue to kick it in the head.

Earlier in the week in Virginia, demonstrators used ropes to pull down the eight-foot (2.44-meter) statue and then dumped it in a nearby lake, the Richmond Times-Dispatch said.

In Washington, D.C., U.S. House of Representatives Speaker Nancy Pelosi urged Congress on Wednesday to remove from the U.S. Capitol 11 statues representing Confederate leaders and soldiers from the Civil War. U.S. military bases honoring Civil War Confederate leaders will not be renamed, President Donald Trump said Wednesday, pushing back on the pressure to rid public places of monuments glorifying the once pro-slavery South.

Similar attacks on statues of historical figures seen by activists as celebrating racism and slavery have taken place in Britain and Belgium.

In Belgium, a long-running trickle of dissent that resulted in a little more than occasional vandalism has turned into a torrent, with statues of Leopold II defaced in a half-dozen cities. Leopold is increasingly seen as a stain on the nation as he held Congo as his personal property during his reign and may have been responsible for the deaths of millions of Congolese more than a century ago. Demonstrators want him removed from public view. On Wednesday, an internet petition to rid the capital, Brussels, of any Leopold statues swept past 70,000 signatures. Also this week, regional education authorities promised history course reforms to better explain the true character of colonialism.

Similar efforts are unfolding in Britain, as protesters drew up a "hit list" of 60 statues of slave traders across the country to be removed. London's mayor has promised a review of all monuments. The Topple the Racists website was published by the Stop Trump coalition in support of the Black Lives Matter protests. The list of statues and street names range from statues of Columbus to Winston Churchill and Thomas Guy. At least two statues of Churchill were vandalized with graffiti by protesters.

On Sunday, protesters in Bristol, western England, pulled down a statue of 17th-century slave trader Edward Colston and threw it into the harbor. It was retrieved on Thursday, and the local council said it would be displayed in a museum. Other memorials have also since been removed, and councils run by the opposition Labour Party said they would review the "appropriateness of local monuments and statues" on public land.