Global coalition appeals to EU to probe Islamophobia in France 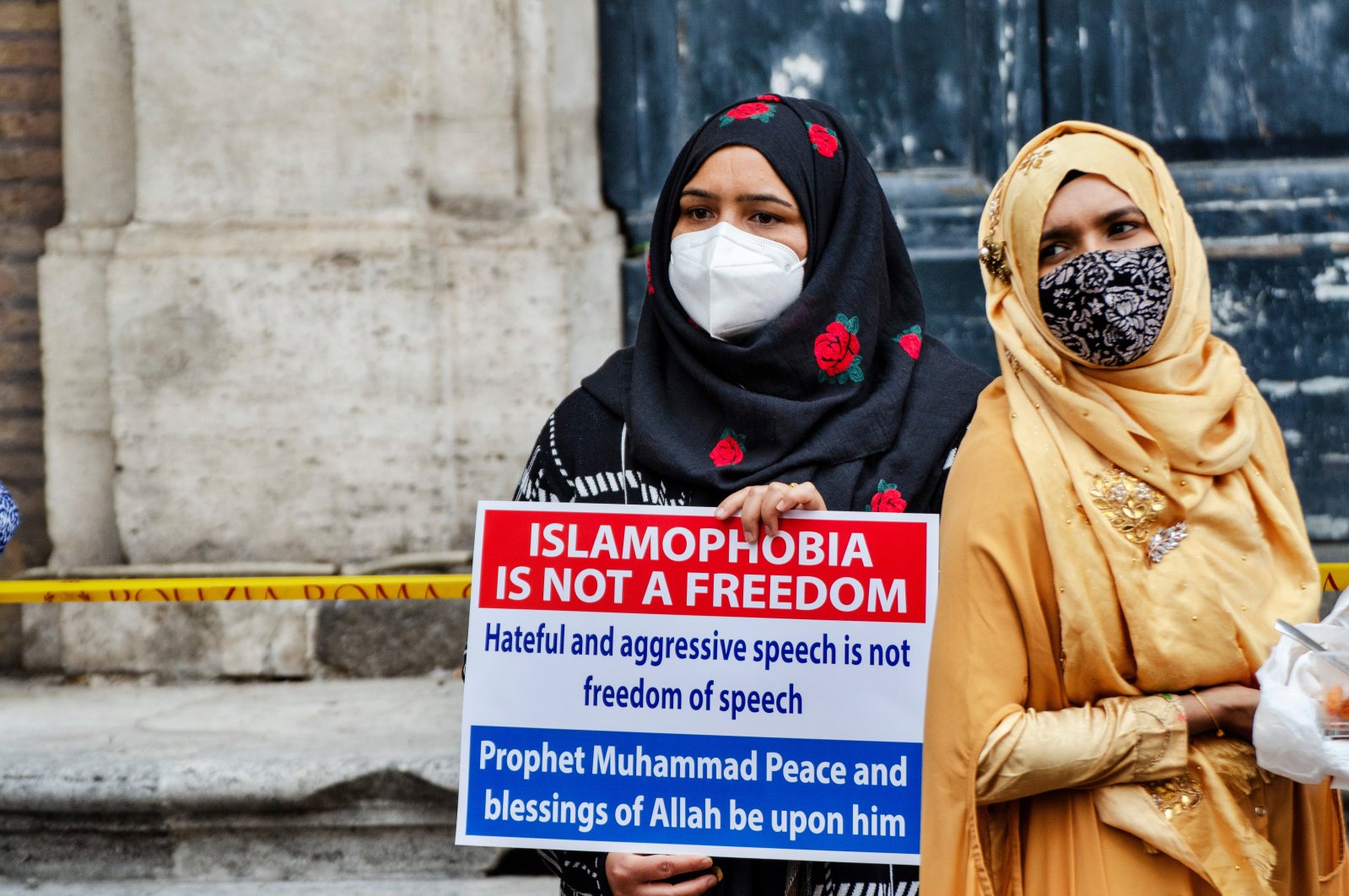 Members of an Italian Muslim association stage a sit-in and prayer to condemn what they see as persecutory acts against the Islamic community in France, Rome, Italy, Oct. 30, 2020. (Shutterstock Photo)
by DAILY SABAH WITH AA Mar 09, 2021 12:22 pm

A global coalition of 25 nongovernmental organizations (NGOs) has asked the European Commission to investigate France for its state-sponsored support of Islamophobia. In a petition to Ursula von der Leyen, the president of the European Commission, these NGOs representing 11 countries have asked her to try the French government at the European Court of Justice for imposing discriminatory practices.

"France has implemented numerous laws designed to limit freedom of belief and punish the manifestation of religion," the petition said.

Speaking to Anadolu Agency (AA), Samira Sabir from Sabir's Legal Services, who submitted the petition to the European Commission on behalf of the alliance, said Islamophobia has become ingrained and mainstream in European societies.

"Islamophobia is not only a widespread and serious phenomenon in right-wing circles, but it is also ingrained in the mainstream of European societies,” she said, adding that France is an example of how state actors have institutionalized and legitimized Islamophobia through hate speech targeting Muslims.

Among the organizations who have signed the petition was the Representative Council of France's Black Associations, Muslim Rights Watch Netherlands, the Islamic Central Council Switzerland and the Muslim Association for Human Rights from Spain.

"There is a widespread failure to implement EU legislation and in particular human rights related to religious integrity and the freedom to express political beliefs in France," the petition said.

It has also highlighted French President Emmanuel Macron's plan "against separatism,” which according to these NGOs merely focuses on tightening "political, ideological, theological and financial control on Muslim communities.”

"There is no real or effective remedy within the French legal system to stop the continuation of structural and systemic Islamophobia by the French government within the meanings established by European case law,” said the NGOs, while explaining the reasoning behind approaching the European Commission. They asked von der Leyen to intervene to prevent a precedent from being set that would harm not only Muslims but other communities in France as well. The petition noted that the French government exploited the killing of French middle school teacher Samuel Paty to promote a racist, discriminative and Islamophobic agenda.

Referring to France's interior minister's statement, defending the raids against people without links to investigations into the killing of Paty to send a message, the petition said that so far police have conducted 51 violent raids on homes of Muslims. However, France began exhibiting a certain attitude toward Islam and the country's Muslim population long before Paty's death. The country banned the wearing of the hijab in secondary schools in 2004. Then-President Jacques Chirac called the hijab an "aggressive" symbol that could no longer be "put up" with. Since then, every successive French president has taken a confrontational approach toward the country's 5.4 million Muslims.

Seeking direct and urgent intervention from the European Commission, Sabir said it was the responsibility of the EU to directly act upon the complaint.

"With its enforcement powers, the European Commission must ensure the enforcement of EU law," she said, adding that France has violated the EU Charter of Fundamental Rights and regulations on the prohibition of discrimination, xenophobia, racism, and protection of minorities and children's rights.

While the French government has been widely criticized for its moves and rhetoric against Muslims, Macron's claim that Islam is "in crisis,” raids on mosques and Islamic foundations and a proposed "anti-separatism” law that slaps wide-ranging restrictions on the Muslim community have also come under fire. The bill permits authorities to interfere with mosques and their administrators as well as control the finances of associations and NGOs belonging to Muslims. Macron's attitude toward Muslims has intensified as his popularity waned, paving the way for far-right leader Marine Le Pen, who is leading the polls ahead of next year's presidential election. However, Macron's government's spat with Muslims even managed to surprise Le Pen, with French Interior Minister Gerald Darmanin accusing the far-right leader of his "soft on Islam" policies in a televised debate earlier.

Human rights groups are now asking the EU directly to investigate the motives behind the flood of "serious human rights violations" in France and to ensure that the country is "making every effort to enact laws that prevent discrimination against Muslims." The global coalition of civil society organizations is seeking to attract the attention of the EU's highest figurehead, arguing that the Muslim population in the country “has no real or effective remedy in the French legal system to stop France from continuing structural and systemic Islamophobia in the government." The coalition had also petitioned the U.N. Human Rights Council, complaining of France's systematic Islamophobic actions, on Jan. 18, 2021.

According to a coalition that appeals to the EU, the Muslim community in 2020 faced an “onslaught” by the state, which decided to suppress the community, as a result of which three schools, madrassas and Muslim-owned enterprises were closed.

In December last year, the only Muslim school in Paris was closed by the authorities, which its founders believe was due to the fact that Muslim girls were allowed to wear headscarves. More than three dozen police officers descended on the small MHS middle and high school, confining the 92 students inside their classrooms, photographing everything, even the inside of the refrigerator, and grilling the school director in her office.

"It was like they were moving in on a drug deal," said Hanane Loukili, the director and co-founder of the MHS middle and high school, recalling the Nov. 17 scene. Loukili didn’t know it then, but a team from the Cell to Fight Radical Islam and Community Withdrawal (CLIR) had arrived for inspection. Within a week, a shaken Loukili informed students that their school was shutting down. Loukili insists she is no radical, but such operations illustrate the extent of French efforts to fight "Islamist separatism."

A majority of the school's students were Muslims, with at least 40% of girls donning headscarves. Loukili said the decision to not discriminate against students publicly practicing their faith was made because no school in the capital region of Paris admitted these students.

Dragnet raids like those unleashed against Loukili's school are an underside of the presidential priority, unearthing soft spots on a local level to nip radicalization in the bud. They now reach across the country, with police accompanied by educators or other specialists depending on the target. In December alone, teams carried out 476 raids and closed 36 establishments of various types, according to Interior Ministry figures.

Since November 2019, when the program marked its first year, 3,881 establishments have been inspected and 126 closed, mostly small businesses but also two schools, ministry figures show. One was an underground school with no windows or educational program, along with sports clubs where preaching and obligatory prayer were practiced behind the scenes.

The coalition has demanded a probe into the motives behind France's spate of "serious human rights violations" and seeks to make sure that the country "makes all efforts to enact laws to prevent discrimination against Muslims."