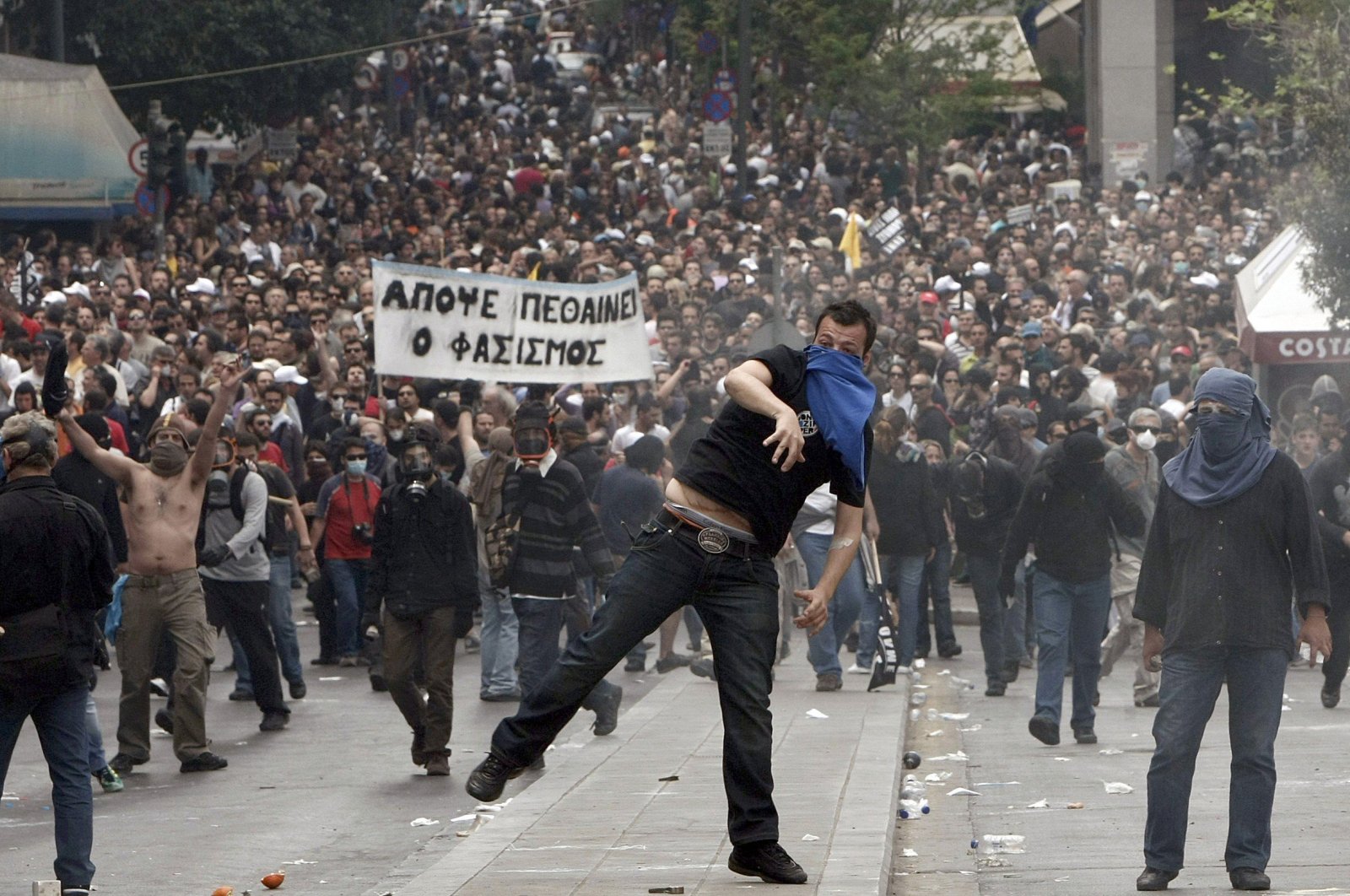 Demonstartors hurl projectiles at riot police near the Greek parliament in Athens during a nationwide strike in Greece, May 5, 2010. (Reuters Photo)
by Agencies
May 09, 2020 2:12 pm

A plaque commemorating three bank employees who died of asphyxiation when their workplace was firebombed during a protest 10 years ago was unveiled in Athens Saturday.

A number of officials, led by Greek President Katerina Sakellaropoulou, attended the unveiling ceremony. Leaders of two of the country's leftist parties, Syriza and the Communist Party, also laid wreaths at the site in central Athens.

"Tragic incidents like this are not compatible with our democratic tradition, nor with the kind of society that we dream of," Sakellaropoulou said during a ceremony outside the building that housed the bank.

"I hope we don't experience such manifestations of violence in our country ever again," she said.

The three employees, a man and two women, all in their 30s, died on May 5, 2010, when the Marfin Bank branch in central Athens was firebombed by anarchists taking part in a large protest march against the first austerity agreement Greece had signed with its creditors just days earlier. One of the victims was four months pregnant.

The fire spread quickly and, although most employees made it out safely, some were trapped inside. Those who made it onto balconies found that many in the crowd below were shouting for them to burn for having shown up for work despite a call for a general strike. Firefighters could only get in after considerable delay, while journalists outside the burning building were attacked by anarchists calling them provocateurs for reporting casualties.

Prime Minister Kyriakos Mitsotakis announced earlier this week the reopening into an inquiry on the incident, for which no one has been charged. He also announced that the state is abandoning its appeal against the 2.4 million euros awarded to the families of the victims in compensation.

The austerity policies were widely associated with the now ruling New Democracy party but also with the socialist party that was then in government.

The main opposition leftist Syriza party, which had been accused of fuelling the violent 2010 riots, on Saturday called for the perpetrators to be identified and punished.

10 years on, Greece is facing a recession once again because of the global coronavirus crisis. A lockdown was imposed on March 23 and is gradually being erased from the start of this week.

Though the death toll is low at 150, the prime minister has warned of a downturn. With tourism being one of Greece's most important sources of revenue, along with shipping, the Greek government estimates it could lose 8-10 billion euros ($8.8-11 billion) in income this year.