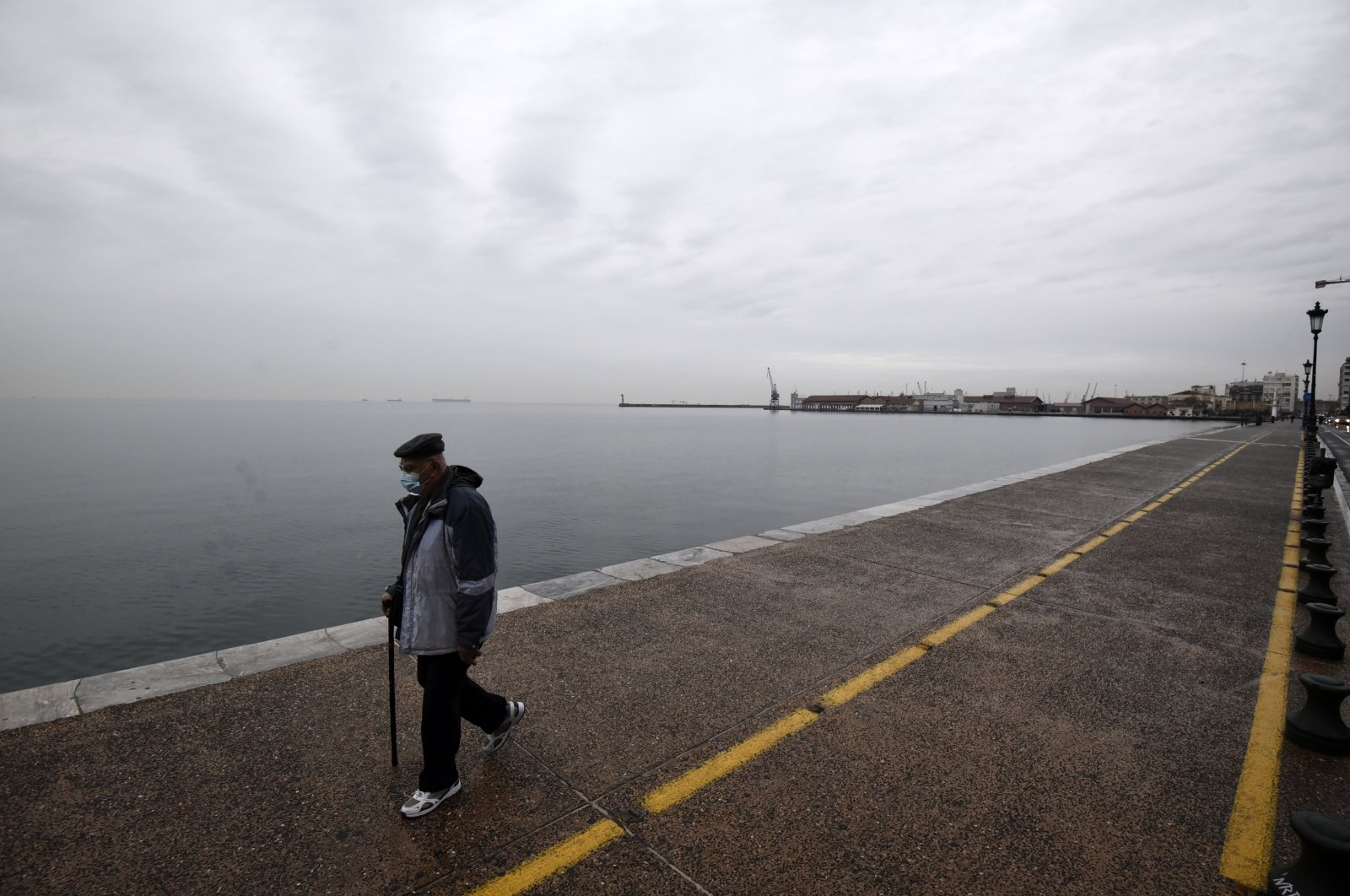 A pedestrian wearing a mask against the spread of COVID-19 walks on a coastal avenue during the lockdown in the northern city of Thessaloniki, Greece, Nov. 3, 2020. (AP Photo)
by Agencies Nov 03, 2020 5:20 pm
RECOMMENDED

Greece expanded restrictions imposing a night curfew in areas most affected by COVID-19 as well as restrictions on movement. The country shut restaurants, bars, theaters and museums in the most populous areas of the country for one month on Tuesday to contain a resurgence of cases.

Although the country has seen a gradual increase in infections since early October and has been reimposing restrictions, some Greeks believe the new rules will hurt the economy that only recently emerged from a decadelong debt crisis.

In the wake of the recent surge in the COVID-19 cases, Greek authorities imposed a lockdown on its second largest city, Thessaloniki, and the neighboring northern province of Serres beginning Tuesday morning, Anadolu Agency (AA) reported.

Residents can only leave their homes for specific reasons after notifying authorities by text. Nonessential domestic and international flights to Thessaloniki were canceled, and retail stores, restaurants, gyms, churches and entertainment venues were ordered to shut for the two-week lockdown. Primary and junior high schools remained open, but upper-grade high school classes and universities were being taught online.

Stelios Petsas, a government spokesperson, said the decision was taken following the spike in COVID-19 cases over the previous weekend.

The official was referring to the 530, 839 and 449 infections registered in Thessaloniki and Serres cities this past Friday, Saturday and Sunday, respectively.

"While the figures show that Greece is still among the countries with a better epidemiological picture, there has recently been exponential growth in coronavirus cases in our country,” Petsas said at a news conference on Monday. "The condition in Thessaloniki (and) in some neighboring regions is extremely serious for public health. Health Minister Vassilis Kikilias visited the city and an emergency plan has been set in motion.”

Starting Tuesday, a curfew will be imposed from 9 p.m. (7 p.m. GMT) to 5 a.m. (3 a.m. GMT) for the next 15 days in Thessaloniki and Serres. Citizens will need to inform the General Secretariat for Civil Protection via text message if they need to leave their houses, a measure that was also in place during the first lockdown in March. High schools will be closed, but other schools will remain open, while university classes will continue online.

Petsas urged people to respect the latest restrictions in order to prevent a nationwide lockdown.

The lockdown comes days after Prime Minister Kyriakos Mitsotakis announced plans to tighten COVID-19 safety measures across Greece. In a televised address on Saturday, he stated they would implement restrictions on movement and bars, cafes, cinemas, gyms and museums in high-risk areas would be shut down.

Greece recorded 1,152 more COVID-19 cases on Monday, 96 of them linked to known clusters and 33 identified at entry points to the country, the National Public Health Organization (EODY) said. The country's overall count stands at 42,080, including 642 fatalities, according to latest data.