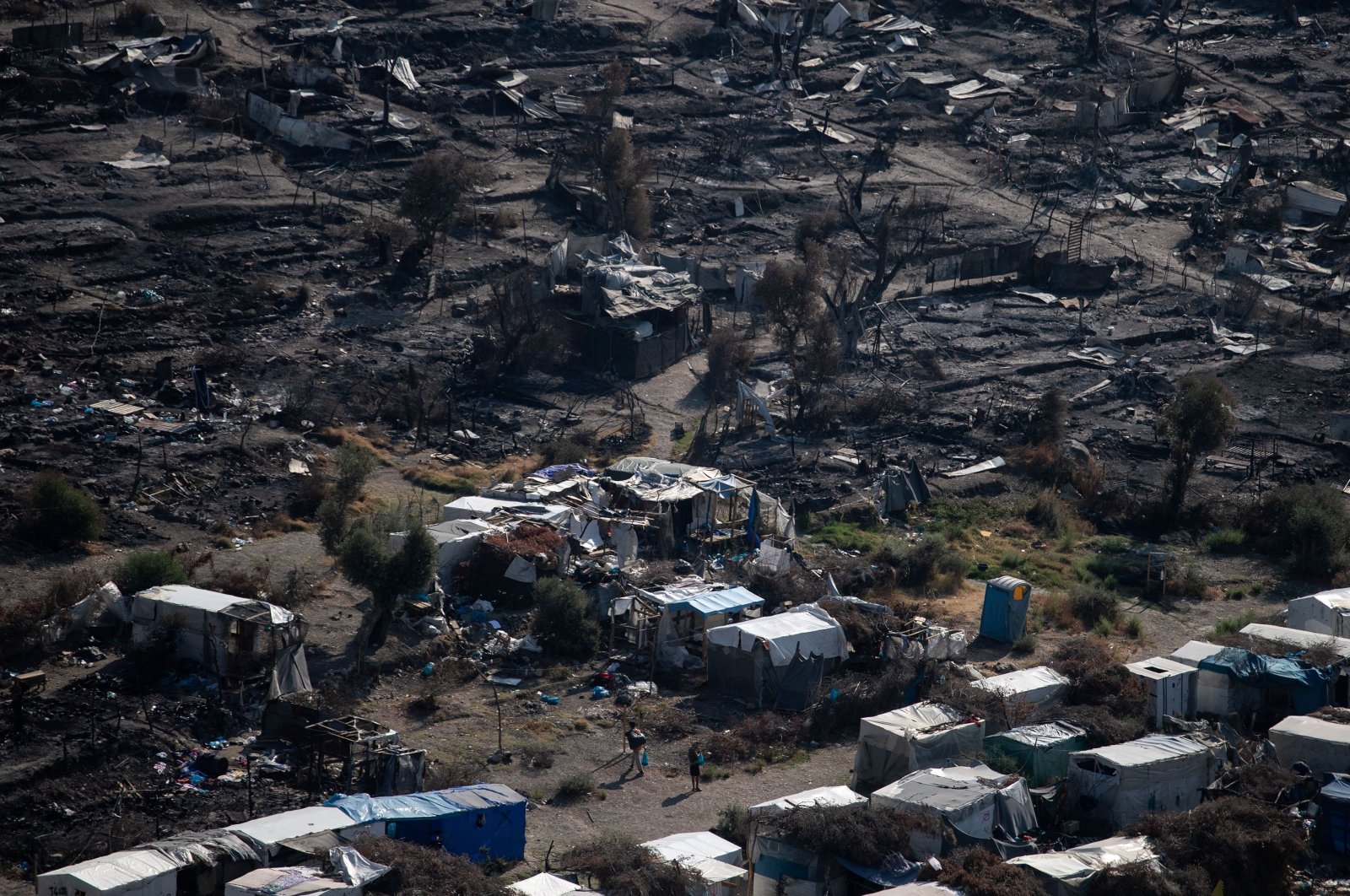 People make their way inside the destroyed Moria camp for refugees and migrants following a fire, on the island of Lesbos, Greece, Sept. 16, 2020. (Reuters Photo)
by Agencies Sep 16, 2020 3:29 pm
RECOMMENDED

Greek authorities were still struggling Wednesday to move thousands of migrants sleeping rough into a temporary camp, a week after the overcrowded Moria migrant camp burned down, while fears grew over a coronavirus outbreak on the island of Lesbos.

More than 12,000 people, mostly refugees from Afghanistan, Africa and Syria, were left without shelter, proper sanitation or access to food and water due to the fire that tore through Moria, Greece's biggest camp for migrants reaching its islands by sea.

No one was killed or hurt in the fire, which broke out after quarantine measures were imposed following the discovery of COVID-19 cases on the site.

So far, only 1,200 people have moved into the temporary facility at Kara Tepe near the island's port of Mytilene, which was ready to host at least 5,000. A further 11,000 people were still without shelter on the island following a fire that ripped through the camp last week.

"They are still reluctant," said a police official on condition of anonymity. "Negotiations are ongoing."

Authorities have distributed flyers and sent text messages to migrants trying to convince them to move into the new tents, officials said.

One official said migrants hoped to be allowed to leave the island and believed that living conditions in the temporary camp would be no better than at Moria, which aid groups had called appalling.

People crossing the new facility entrance were being tested for COVID-19 and so far 35 were found positive. Residents were afraid a coronavirus outbreak was looming with thousands of people sleeping rough and untested.

Another blaze broke out near a migrant camp on the northeastern Aegean island of Samos Tuesday, burning grass and nearby trees, fire brigade and police officials said.

"There is a fire on the edge of the registration center," the mayor of the town of Vathy told German Press Agency (dpa). "No tents are burning yet, but I'm concerned."

Greece's conservative government, which came to power last year, says it aims to replace open-air tented camps with formal migrant centers with temporary housing, where entry and exit would be controlled.

Greek Prime Minister Kyriakos Mitsotakis said more "tangible" help was needed. Germany said it could take in up to 1,500 people stranded by the fire.

German Chancellor Angela Merkel told a meeting of conservative lawmakers Tuesday that Berlin's acceptance of migrants "should not create the illusion that the problems have been solved," she was quoted as saying by those in attendance.

"The truth is: We all knew that the conditions on the Greek islands are very intolerable," she said, describing the Moria camp as "not a sign of Europe's values and of Europe's ability to act."

Belgium offered to take in only a handful of migrants. As the Belgian newspaper De Morgen reported, they agreed to take in 12 unaccompanied minors.

"They also need to fundamentally rethink the failed and inhumane policies that led to the creation of a sprawling, unsanitary and dangerous refugee camp in an EU country, rather than just building a replica of the same thing."