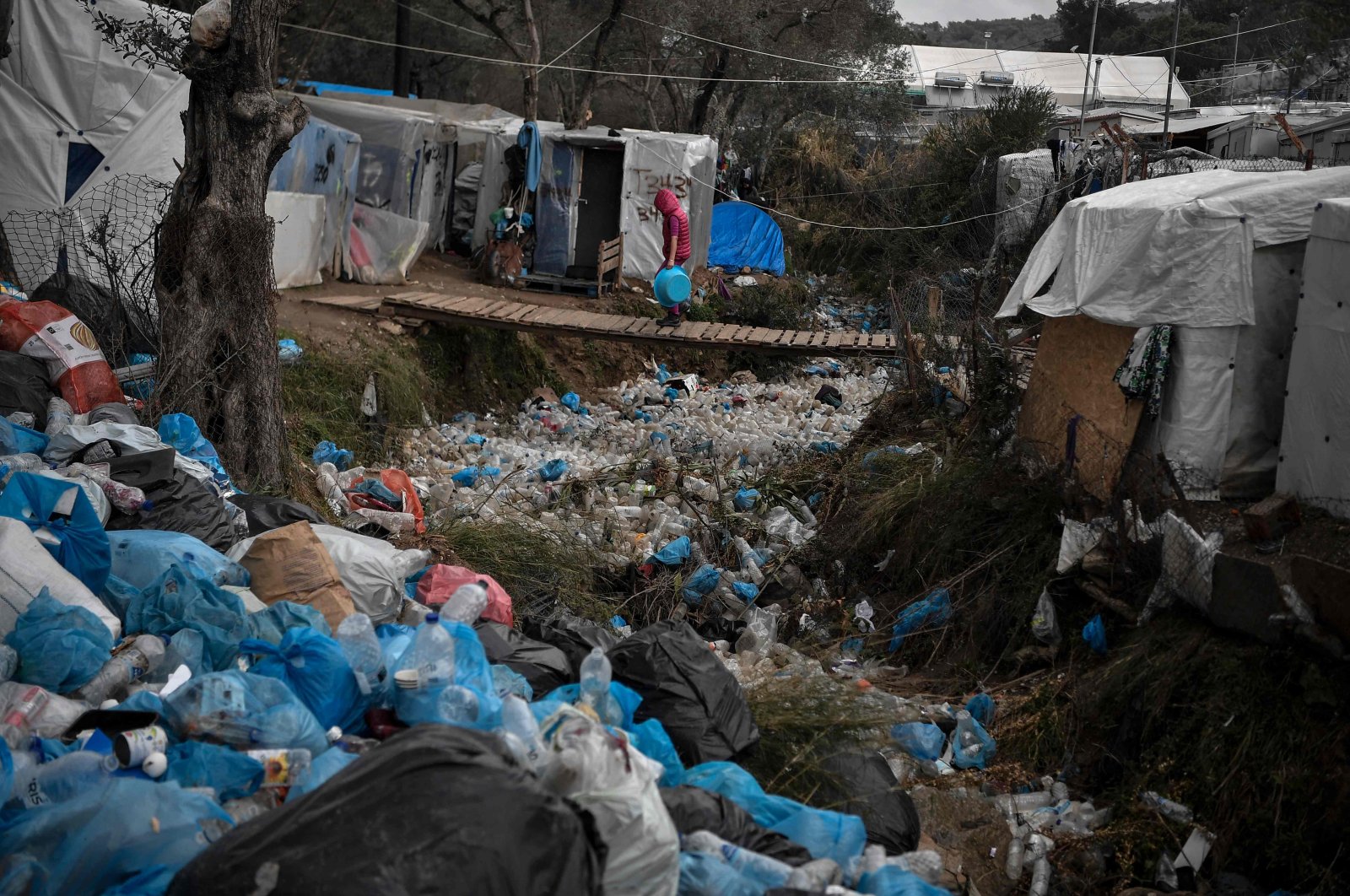 A child walks on a bridge over a trash-filled ditch in the overcrowded Moria migrant camp on the Greek Aegean island of Lesbos, March 5, 2020. (AFP Photo)
by Compiled from Wire Services Sep 02, 2020 12:42 pm

Greece on Wednesday announced a first coronavirus infection in its largest migrant camp of Moria on the island of Lesbos, where nearly 13,000 asylum seekers live in unsanitary conditions.

A 40-year old Somali asylum seeker has tested positive for the virus and had been put in isolation, one of the officials told Reuters. Authorities were trying to trace the people he had contacted, the official said. The man is a recognized refugee who had recently returned to the island from Athens, the source said.

More than 12,700 people live in Moria, which has a nominal capacity for fewer than 2,800. The facility has been frequently criticized by aid groups for poor living conditions. Many asylum seekers sleep in tents in an olive grove outside the walls of the camp, where restrictions are harder to enforce. The Somali refugee was among those sleeping outdoors, the Moria camp source told Agence France-Presse (AFP).

Another infection in an island camp on the island of Chios, involving a 35-year-old man from Yemen, had been reported last month. Several non-fatal coronavirus cases have surfaced in Greek camps on the mainland – including 150 infections at a migrant hotel in the Peloponnese in April.

Greece has been frequently criticized for its questionable practices and policies toward migrants and the inhumane conditions of its overcrowded camps. Rights groups including the United Nations refugee agency have repeatedly urged Greece to reduce congestion at the camps.

On Lesbos, medical charity Doctors Without Borders (MSF) in July said it had been forced to shut down a coronavirus isolation centre serving the local camp over a planning dispute. The group has criticized the camp lockdown, which has been repeatedly renewed since March, as "discriminatory" and "counter-productive".

The country has recorded 10,524 COVID-19 cases since the first infection in February and 271 COVID-related deaths. In recent weeks it has seen a surge in cases, which has forced Greek authorities to gradually reimpose restrictions to curb the spread of the virus.

Lesbos lies just off the Turkish coast, and hundreds of thousands of migrants and refugees have used the island as a staging post in recent years in their attempt to get to mainland Europe. Turkey and Greece have been key transit points for migrants fleeing war and persecution. Athens deployed a floating barrier to stop migrants arriving from the Turkish coast off the island of Lesbos.

The Greek government has struggled to manage the influx, keeping many in overcrowded camps on the Aegean Greek islands near the Turkish coast. The country's officials have pushed back thousands of asylum-seekers trying to reach the country's shores, a global human rights watchdog said in a report on Saturday.

According to a researcher at Human Rights Watch (HRW), Eva Cosse, Greek authorities had been seen forcibly pushing back migrants and asylum-seekers in small inflatable boats from the islands of Rhodes, Samos, and Symi, saying that evidence and reports describing the abuses are too widespread to be ignored, as Greece rejects all the allegations.

The New York Times also reported numerous violations toward migrants by Greece, claiming that the country was "abandoning" migrants at sea for the Turkish coast guard to rescue. The newspaper said it had interviewed survivors from five such episodes and cited additional evidence from independent watchdogs, two academic researchers and the Turkish coast guard. Based on its research, the Times said more than 1,000 asylum-seekers had been "dropped at sea" since March.