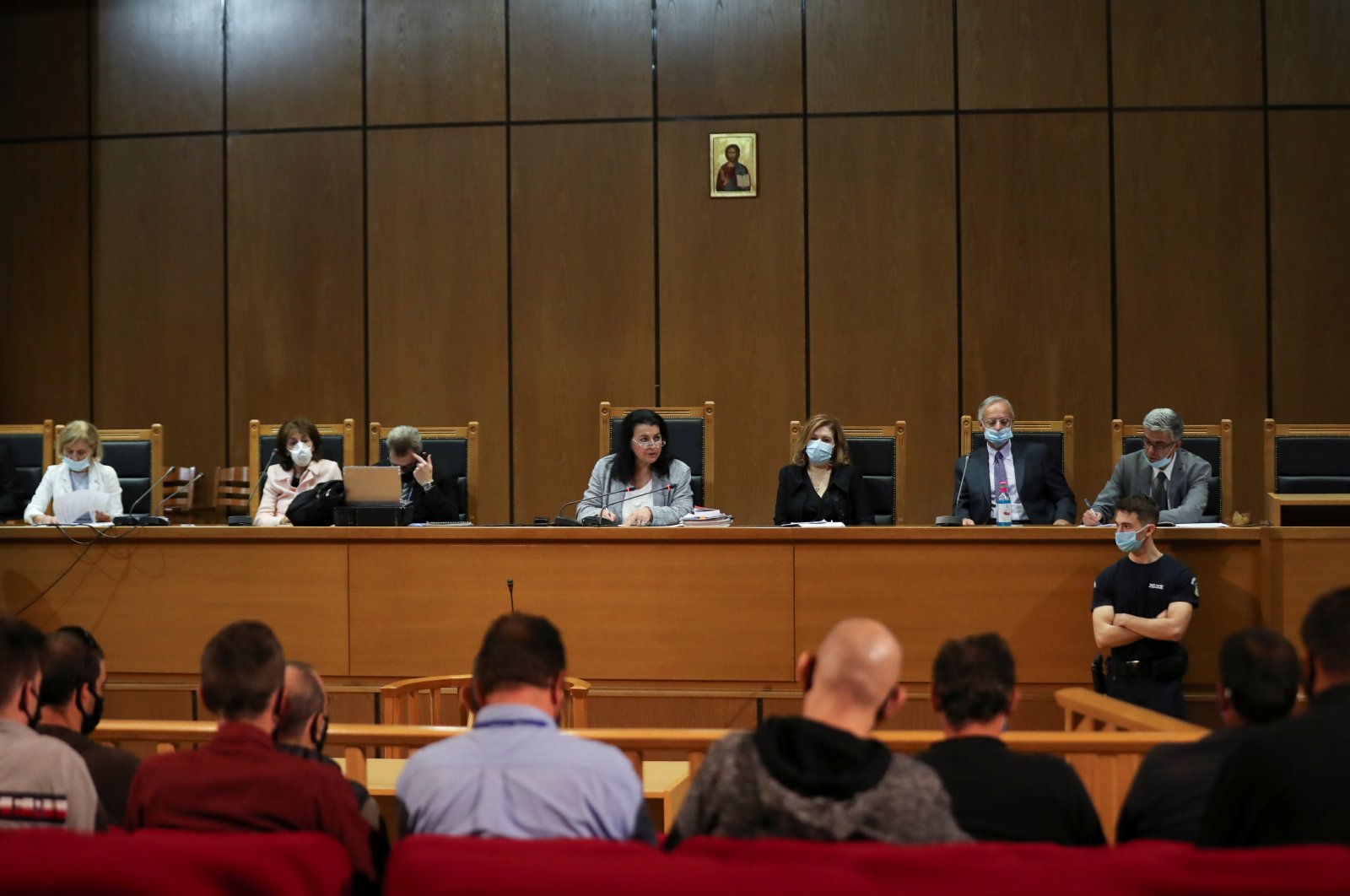 Presiding Judge Maria Lepenioti announces the sentences during the trial of leaders and members of the Golden Dawn far-right party that was declared a criminal organization by a court, in Athens, Greece, Oct. 14, 2020. (Reuters Photo)
by Agencies Oct 14, 2020 1:23 pm
RECOMMENDED

A Greek court on Wednesday handed a 13-year prison sentence to the leader of neo-Nazi group Golden Dawn for running a criminal organization disguised as a political party.

The court also gave a life sentence to the Golden Dawn member who murdered anti-fascist rapper Pavlos Fyssas, who was chased down by a mob of Golden Dawn thugs and stabbed to death in front of a cafe in the western Athens suburb of Keratsini in September 2013, the act that sparked the investigation into the paramilitary group.

A Greek appeals court ruled last week that leaders of the country's third most popular party in parliament during the debt crisis were guilty of running a criminal group. The judgment came as police and anti-fascist demonstrators clashed outside the courthouse, on the sidelines of a large protest of some 15,000 people.

Reading out the verdict in a trial that took place over five years, presiding Judge Maria Lepenioti said Golden Dawn founder Mihaloliakos and other senior members were guilty of running a criminal organization. Among those convicted are independent Eurodeputy Yiannis Lagos, who defected from the party last year, the party's former spokesperson Ilias Kassidiaris and a dozen other senior party members elected to parliament in 2012 at the height of Golden Dawn's influence. None of the party's senior members were present in court.

Over the decades, Mihaloliakos took advantage of a flood of immigration from the Balkans to hone his racist political messaging.

His group steadily grew in numbers and influence, coming together at meetings with flaming torches, while its members carried out attacks on migrants and left-wing activists that were rarely punished.

Mihaloliakos became a member of the Athens City Council in 2010 where he performed a Nazi salute at one of his first meetings.

Golden Dawn was at its political peak at the time of Fyssas' murder, having won 18 seats in the 300-seat parliament in 2012 due to anger over a financial crisis in Greece and the arrival of hundreds of thousands of migrants from the Middle East and South Asia.

Many of those members of parliaments are on trial, including Christos Pappas, who police found in possession of a trove of Nazi and fascist memorabilia and Ilias Kassidiaris, a party spokesperson who has a swastika tattoo and once struck a female communist lawmaker in the face during a TV talk show.

Prime Minister Kyriakos Mitsotakis said that the formation of Golden Dawn had been "catastrophic" for Greece's politics, and he hailed the rejection of the party by Greek voters. In the last parliamentary elections in 2019, following the crackdown and prosecutions, Golden Dawn lost all of its seats.