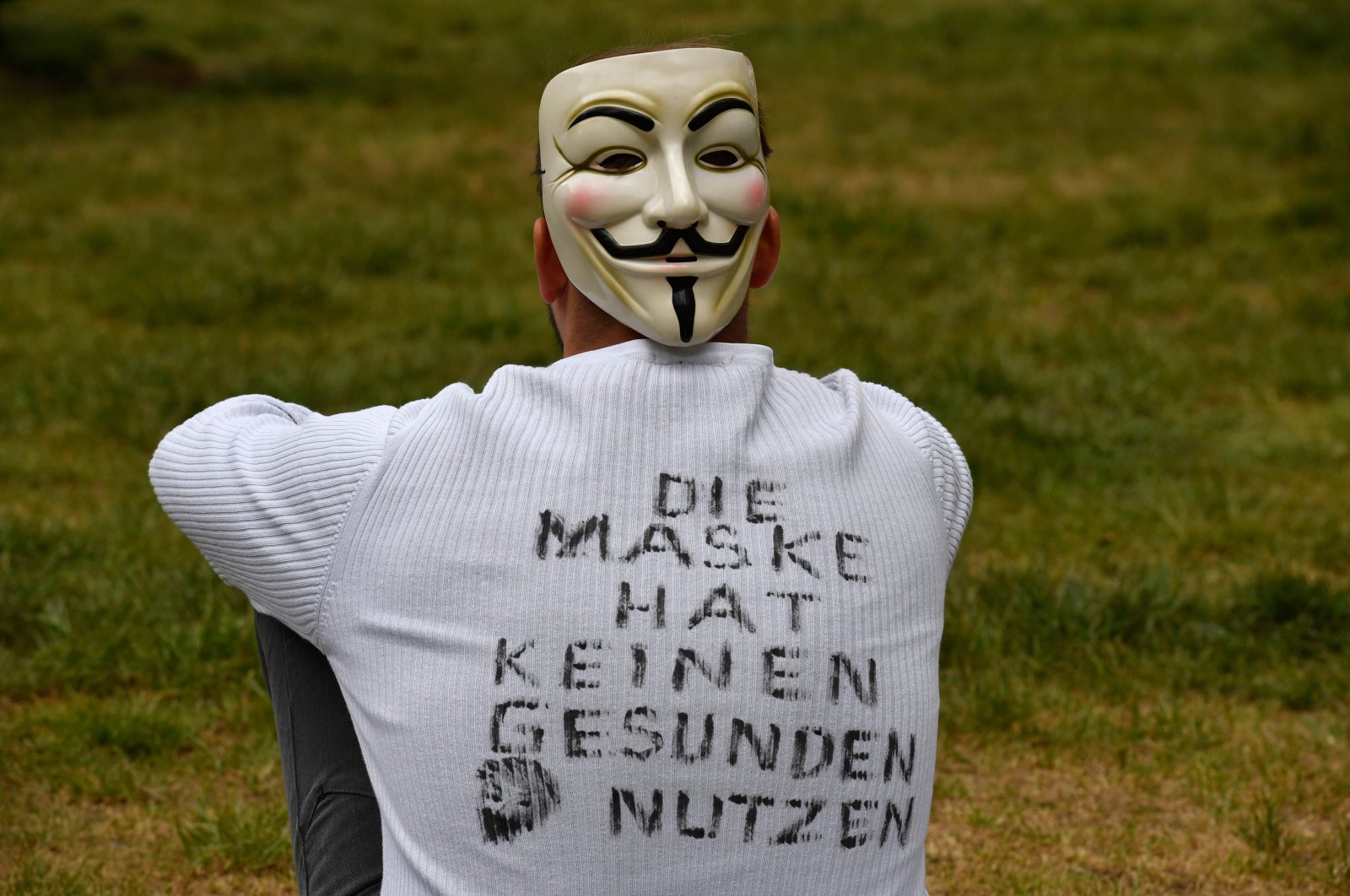 A demonstrator wearing a mask and a T-shirt with inscriptions reading 'The mask has no healthy use' sits in the demo area during a protest against the coronavirus-related restrictions in Berlin, May 2, 2020. (AFP Photo)
by French Press Agency - AFP May 16, 2020 10:34 am
RECOMMENDED

From anger over lockdown measures to a purported vaccine plan by Bill Gates: a growing wave of demonstrations by German conspiracy theorists, extremists and anti-vaxxers has even alarmed Chancellor Angela Merkel.

Initially starting as a handful of protesters decrying tough restrictions on public life to halt transmission of the coronavirus, the protests have swelled in recent weeks to gatherings of thousands in major German cities.

Thousands are set to mass again in Stuttgart, Munich and Berlin on Saturday, with police out in force after a number of protests turned violent.

The growing demonstrations have sparked comparison to the anti-Muslim Pegida marches at the height of Europe's refugee crisis in 2015, raising questions over whether the strong support that Merkel is currently enjoying due to her handling of the virus crisis could evaporate.

Just like it won popularity by fanning anti-migrant sentiment five years back, the far-right AfD party is now openly encouraging protesters and repositioning itself as an anti-lockdown party.

A recent poll commissioned by the Spiegel news magazine found that almost one in four Germans surveyed voiced "understanding" for the demonstrations.

The development has shocked the political establishment, with Merkel reportedly telling the top brass in her center-right CDU party of the "worrying" trend that may bear some hallmarks of Russia's disinformation campaigns.

Germany in March took unprecedented measures to shut down public life. While a huge majority of Germans back the action, giving Merkel's government a big boost in approval ratings, dissent is fomenting, particularly online, where YouTube videos championing conspiracy theories or quack medical advice are attracting tens of thousands of views.

Seeking to counter absurd claims, President Frank-Walter Steinmeier said that although he wasn't a medical practitioner, he could safely suggest that the "uncomfortable and cumbersome face mask is more to be recommended than a tin-foil hat."

After a public outcry over unruly protests last weekend, the AfD placed itself squarely on the side of the demonstrators.

Party co-chief Alexander Gauland said it was "completely correct that people are exercising their fundamental rights and demonstrating against corona measures."

Any resulting split in society over the demonstrations should not be blamed on the protesters, but on "the sweeping vilification of participants as right-wing extremists, nutcases or conspiracy theorists," he charged.

Sometimes violent in nature, the demonstrations have also been increasingly tinged by anti-Semitism, as participants hold aloft slogans portraying figures like George Soros as the bogeyman in the virus crisis.

"I consider this type of protest to be extremely dangerous," Felix Klein, the government's point man on tackling anti-Semitism, told the Sueddeutsche Zeitung newspaper.

"It undermines confidence in our democratic state and forms a reservoir in which conspiratorial anti-Semites and Holocaust deniers can be found alongside others with sometimes very obscure attitudes," he added.

Miro Dittrich, an expert at the Amadeu Antonio Foundation, said conspiracy theories could be appealing to people who find it hard to grasp the concept of the virus, and who personally know of no one who has been affected.

"In addition, people are currently isolated from their social environment in a crisis situation and spend an extremely large amount of time online, all factors that promote the belief in conspiracy stories," Dittrich said.

Klein warned that "we must take the emergence of these movements very seriously and cannot hope that with the end of the corona crisis these forces will disappear again."

Spiegel also cited the urgent need for Merkel to get a grip on the situation.

"If she doesn't take counter action now, a second populist wave of anger could break over Germany," it warned.

Hermann Binkert, who heads the polling institute INSA, said the strong support for Merkel's government could quickly melt away when the health imperative recedes, saying: "When the unifying theme of health fades and the debate focuses on solving the labor market, economic and financial crisis, the consensus ends."