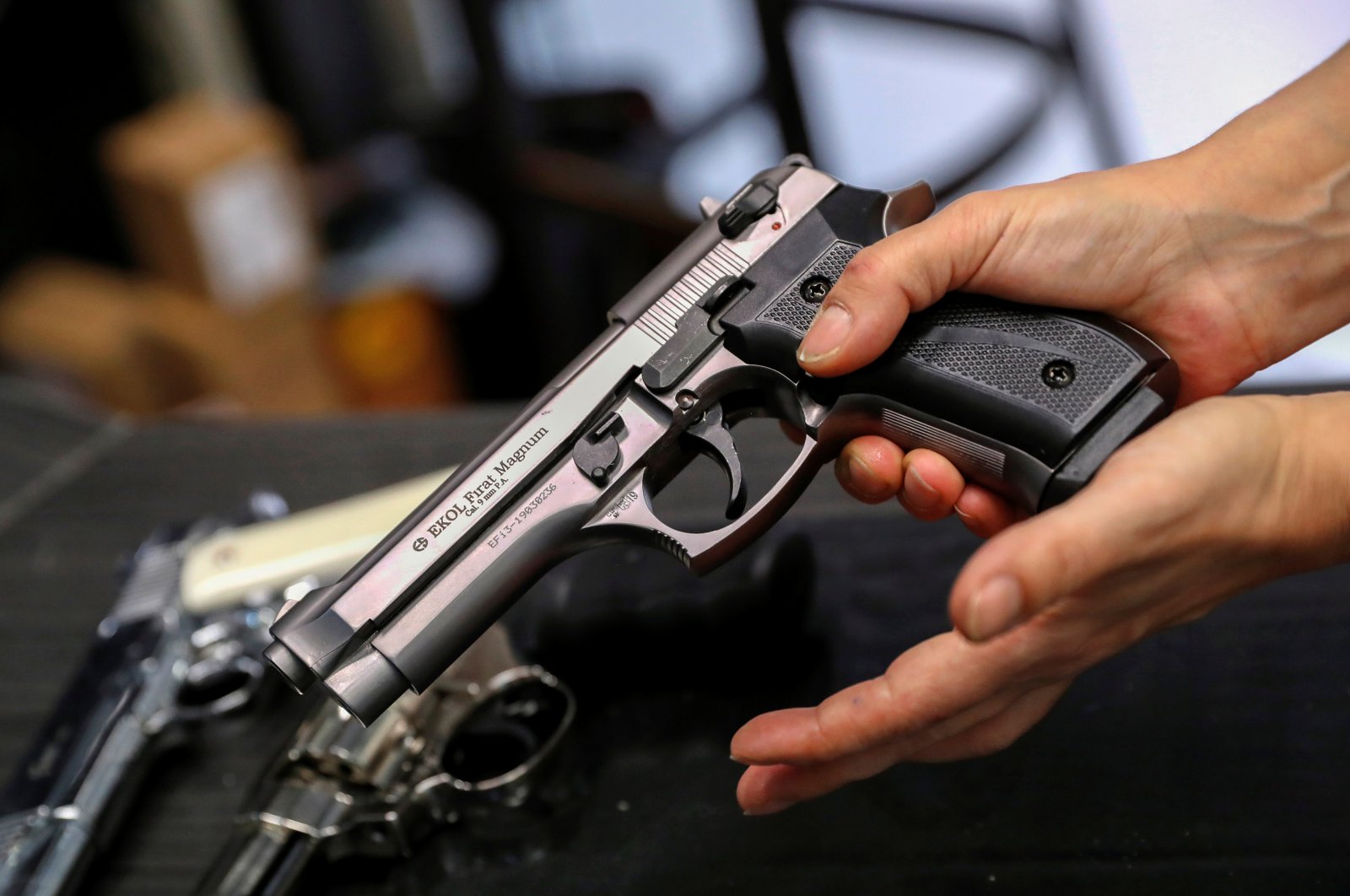 A Hungarian vendor shows an Ekol Firat Magnum gas pistol at a gun shop where people queued up to buy weapons for protection during the coronavirus pandemic, in Budapest, March 20, 2020. (Reuters Photo)
by REUTERS Mar 23, 2020 4:22 pm
RECOMMENDED

Peter Rostas doesn't want to have any reason to use the gun he was buying, but the young Hungarian father of one was taking no chances with a coronavirus epidemic he fears may bring out the worst in some people.

"It's a precautionary measure," Rostas, 33, said as he queued outside a small Budapest shop selling non-military grade weapons that require no license. "I'd rather be laughing later than find myself in a conflict with nothing but a broomstick."

Hungarians have sought in increasing number to arm themselves for protection in recent weeks, fearing a possible unravelling of law and order if severe shortages set in as the coronavirus pandemic spreads.

Gun controls are tight in eastern Europe as across the rest of the continent, but demand for small arms amid growing anxiety over coronavirus has risen elsewhere in the region. The Czech arms manufacturers association said shop owners had reported rising demand and a double-digit rise in sales.

About 300,000 people hold licenses for guns in each of the Czech Republic and Hungary, both with about 10 million inhabitants. Licenses are not mandatory for some light arms.

"We are selling five times as much as in a normal March," said Gabor Vass, who runs three gun shops in the Hungarian capital including the one where Rostas bought his gas pistol.

"We could sell 15 times more if we had any more rubber bullet weapons, but we ran out."

The shop, little bigger than a phone booth and tucked inside a suburban shopping centre on the edge of Budapest, was hardly designed for an onrush of customers. But last week brought a heavy stream, people from all walks of life.

Hungary has registered 167 cases of coronavirus, with seven deaths, but Prime Minister Viktor Orban said on Monday the true number was probably much higher.

'Reassuring' to have gun at home

Rostas fears violence could arise from shortages of essential goods, something the Hungarian government has insisted will not happen. But the stocky auto trader is skeptical.

"If people brawl over toilet paper now, what will they do later? Once shops run out of stock, people will take what they need. Police can hardly deal with every petty theft," he said.

"I'm not planning to kill anyone, but it is reassuring to have a weapon at home."

Vass, the gun shop owner, said even small weapons not requiring a license were very dangerous in the wrong hands, given that even non-combat gas pistols can be lethal at close range, and the interest does not stop there.

"People have gone nuts," he said. "They gobble up anything they don't need a license for. Gas pistols, rubber bullet guns and even things like crossbows, which can harm you seriously."

Hungarian police and the government did not immediately respond to requests for comment.

Gun and ammunition sales have also jumped across the United States amid fears of social breakdown as the pandemic worsens.