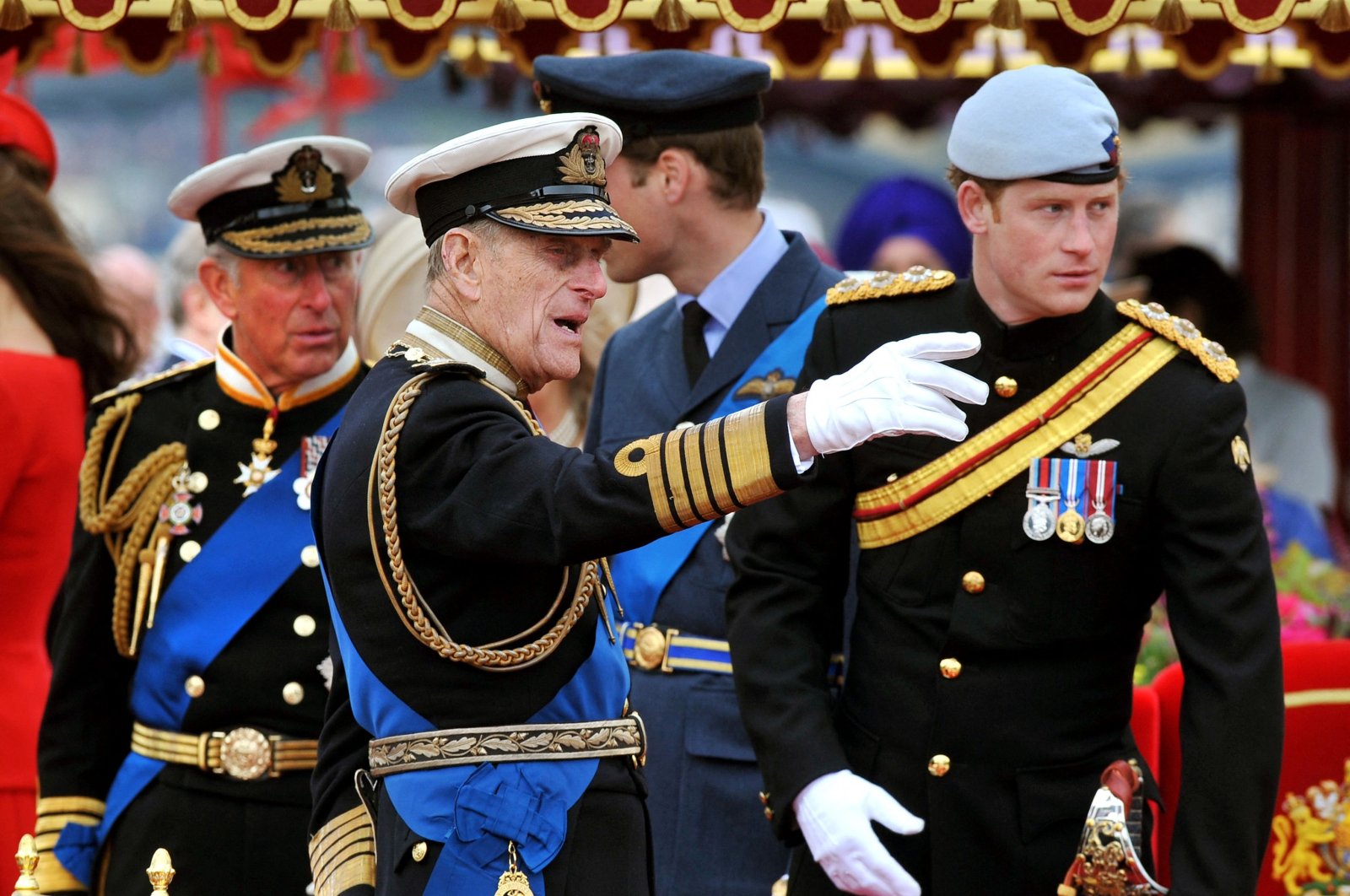 Members of the royal family Prince Charles, Prince of Wales (L), Prince Philip, Duke of Edinburgh (C), Prince Harry (R) and Prince William at the back, talk onboard the Spirit of Chartwell on the River Thames, London, U.K., June 3, 2012. (AFP Photo)
by Reuters Apr 12, 2021 11:22 am
RECOMMENDED

Prince Harry, the Duke of Edinburgh, has arrived back in Britain for the first time since the tell-all interview he and his wife Meghan gave Oprah Winfrey last month, for his grandfather Prince Philip's funeral and praised his grandfather for his "dedication to granny" and for "always being yourself" in a statement released on his return.

"He has been a rock for her majesty the queen with unparalleled devotion, by her side for 73 years of marriage, and while I could go on, I know that right now he would say to all of us, beer in hand, ‘Oh do get on with it!’” Harry's statement read.

"So, on that note, grandpa, thank you for your service, your dedication to granny, and for always being yourself," Harry said and concluded, "Meghan, Archie and I (as well as your future great-granddaughter) will always hold a special place for you in our hearts."

Philip, the husband of Britain's Queen Elizabeth II, who was at her side throughout her 69-year reign, passed away at Windsor Castle on Friday.

Harry, Philip's grandson, arrived in London on Sunday from Los Angeles on a British Airways flight, The Sun newspaper reported. Buckingham Palace said Meghan, who is pregnant, will not attend on the advice of her doctor.

Harry, sixth in line to the throne, will quarantine in accordance with coronavirus guidelines so that he can attend the ceremonial funeral at Windsor Castle.

Interviewed by Oprah in March, Meghan said her pleas for help while she felt suicidal were ignored and that an unnamed member of the family had asked how dark their unborn child's skin might be. Harry also bemoaned his family’s reaction to their decision to step back from official duties and move to Los Angeles.

The explosive interview plunged the royal family into its biggest crisis in decades. In response, Queen Elizabeth said the royals were saddened by the challenging experiences of her grandson and Meghan and promised to privately address revelations about a racist remark about their son.

Philip, who died aged 99, is lying at rest in the Private Chapel at Windsor Castle. On Saturday, the coffin, covered by Philip's standard, a wreath, his naval cap and his sword, will be moved to the State Entrance of Windsor Castle by a bearer party from the Queen’s Company, 1st Battalion Grenadier Guards.

Prince Charles and other members of the royal family will take part in a procession on foot behind the coffin, which will be carried by a specially modified Land Rover that Philip helped to design. The queen, 94, will not walk in the procession.

As the coffin reaches St George's Chapel at Windsor, Britain will observe a minute of silence. There will be no public processions, and the funeral will be held entirely within the grounds of Windsor Castle and limited to 30 mourners in accordance with COVID-19 restrictions.

A spring snowstorm on Monday struck Windsor Castle, where Queen Elizabeth is dealing with the loss of her husband of 73 years.

Her son Prince Andrew said on Sunday the queen was stoical in the face of a loss that she had described as "having left a huge void in her life." Andrew joined his siblings Charles, Anne and Edward in saying they had taken strength from a national outpouring of affection and would rally around their mother in her time of grief.

Charles on Saturday paid tribute to his "dear Papa" who had given such devoted service to Queen Elizabeth, to the royal family, to Britain and to the Commonwealth, expressing gratitude for touching praise of his father.

Meanwhile, Harry's brother Prince William said Monday that he would miss "his grandpa" Prince Philip but that the late duke would have wanted the family to "get on with the job."

"My grandfather’s century of life was defined by service – to his country and Commonwealth, to his wife and queen, and to our family," the Duke of Cambridge said. "I will miss my grandpa, but I know he would want us to get on with the job."

"My grandfather was an extraordinary man and part of an extraordinary generation," William said and added, "Catherine and I will continue to do what he would have wanted and will support the queen in the years ahead."