Hunger strike for climate promises persists ahead of German elections 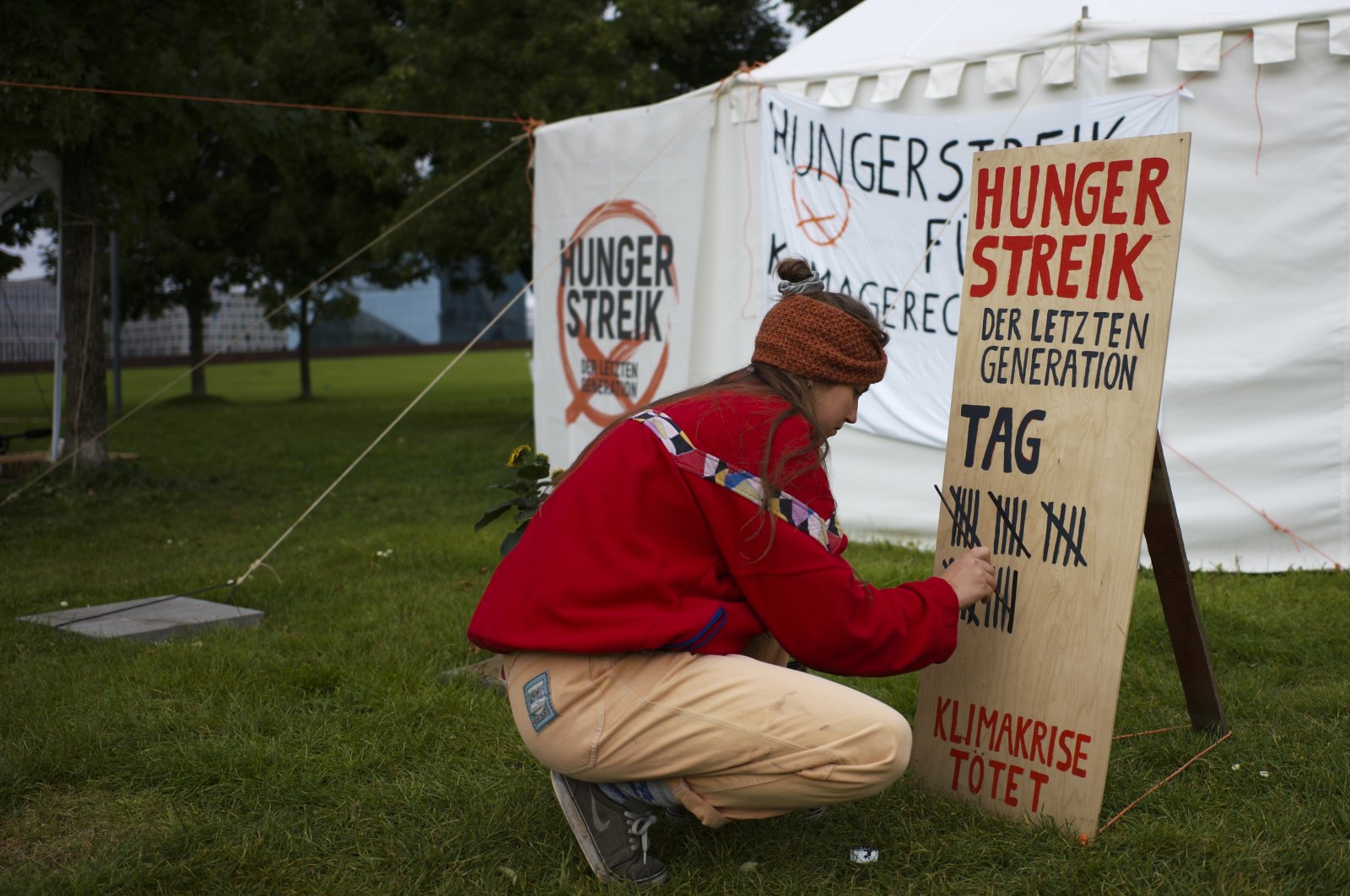 Climate activist Carla Hinrichs makes a line on a wooden board to count the days a small camp of climate activists have been in a hunger strike, near the chancellery in Berlin, Germany, Sept. 22, 2021. (AP Photo)
by ASSOCIATED PRESS Sep 23, 2021 11:24 am
RECOMMENDED

Young activists continue their now three-and-a-half-week hunger strike in Germany's Berlin in the hope of pressuring the three candidates for chancellor of Germany into meeting them for a debate about the climate crisis ahead of Sunday’s general election.

Henning Jeschke is one of them. He is frail and gaunt but determined to go on, still hoping to achieve his goal of creating a more conscious Germany in the new era.

For the first time in Germany, climate change is perhaps the most dominant issue in an election campaign, especially for young voters. It's at the center of televised debates among candidates, and five of the six main parties offer plans with varying degrees of detail for slowing global warming.

But young climate activists – who pitched a protest tent camp in a park in Berlin's government district last month – fear politicians’ promises will quickly dissipate after the vote or give way to pressure from special interests. Jeschke and six others launched a hunger strike on Aug. 30.

On Wednesday, the 24th day without food, Jeschke was resting on a mattress in the center of the camp, propped up on one elbow, giving back-to-back interviews and taking occasional sips of tea.

He said the hunger strike was an act of despair because he and his fellow activists believe that "in this time of climate collapse, there are no honest conversations, that party programs are insufficient and that we urgently need to take action against the climate catastrophe.”

At this point, it's unlikely the candidates – Olaf Scholz of the center-left Social Democrats, Armin Laschet of the center-right Union bloc or even Annalena Baerbock of the pro-environment Greens – will show.

They have urged the strikers to end their protest amid health concerns, instead offering private meetings after the vote, presumably to avoid encounters that could go off the rails. Baerbock spoke to the strikers by phone and expressed empathy for their frustration. A spokesperson for Scholz said he met with some of them and their supporters after a campaign stop near Berlin.

Six of the hunger strikers have halted the protest, including three on Wednesday. Jeschke, though, said he would continue and would refuse liquids, starting Thursday evening, if the demands weren't met.

The 21-year-old from the northeastern town of Greifswald, who quit his political science studies for full-time activism, has already lost 11 kilograms (24 pounds) and said his parents are worried.

"My mother is at home in tears, my father comes to visit again and again, but they also see that it’s necessary,” he said.

Lena Bonasera, 24, who joined the hunger strike Monday, said the activists first met during Fridays For Future protests, as part of the international youth-led movement launched in 2018 by Swedish climate activist Greta Thunberg.

The Oxford-educated Bonasera, who also vowed to stop taking liquids as of Thursday evening, said she halted work on her dissertation on civil disobedience to make time for the campaign.

"I asked myself, why me, and my mom also asked this," she said of her decision to risk her health for her beliefs. "But once you allow yourself to feel how terrible the climate crisis really is, then I have no choice but to act this way."

This Friday, youth activists plan to stage large-scale international protests against climate change, weeks before leaders gather for a U.N. summit in Glasgow. Thunberg is expected at the Berlin rally, taking place just two days before an election that the Greens and climate activists say amounts to the last chance for Europe's biggest economy to correct course.

The hunger strike has made some ripples, even if there won't be a pre-election debate.

Climate scientist Hans Joachim Schellnhuber, who has advised Pope Francis, Chancellor Angela Merkel and European Commission President Ursula von der Leyen, spoke to the protesters by Zoom this week, urging them to start eating again and offering to connect them to decision-makers after the election.

In an open letter, Schellnhuber lent legitimacy to the activists' warnings, writing that Earth will warm by close to 3 degrees Celsius (5.4 degrees Fahrenheit) this century if current climate policies continue worldwide, and that there is even an outside risk that large parts of the planet will become uninhabitable.

"This risk may be small, but would we push our children into a school bus that had a 5% chance of being predicted to be fatal?” he wrote in the letter, widely circulated in the German media.

But Schellnhuber told the activists it's not the time yet for drastic measures, such as hunger strikes. He said he senses a political opening, with leading politicians more willing to tackle the issue. In a phone interview with The Associated Press (AP), he said he believes after conversations with Scholz that the front-runner "takes the issue far more seriously than a few years ago.”

In the climate debate, two camps have emerged, with the Greens offering the most comprehensive program for making Germany carbon neutral with a mix of government incentives and penalties for polluters. Scholz's Social Democrats also propose government-driven change, but with more time than demanded by the Greens to phase out coal plants and combustion engines.

In the other camp, the Christian Democrats and the pro-business Free Democrats argue that market-driven innovation should take the lead.

The race between the parties remains close, with the Social Democrats just a few percentage points ahead in the polls.

Whatever the final outcome, the focus on climate change in public debate is unprecedented, driven in part by young activists, observers said.

"We can feel that this is a generation that is being politicized by the issue of climate change,” said Sascha Müller-Kraenner of Deutsche Umwelthilfe, a veteran environmental protection group. "It's an enormous opportunity for our democracy ... that an entire generation has been mobilized.”

Mueller-Kraenner's group has taken companies with some of the highest carbon emissions to court, filing lawsuits this week against carmakers Mercedes and BMW.

He said such lawsuits and the street protests complement each other. "In the end, it’s the politicians who need to make the decisions, but we must keep up this positive pressure on them,” he said.