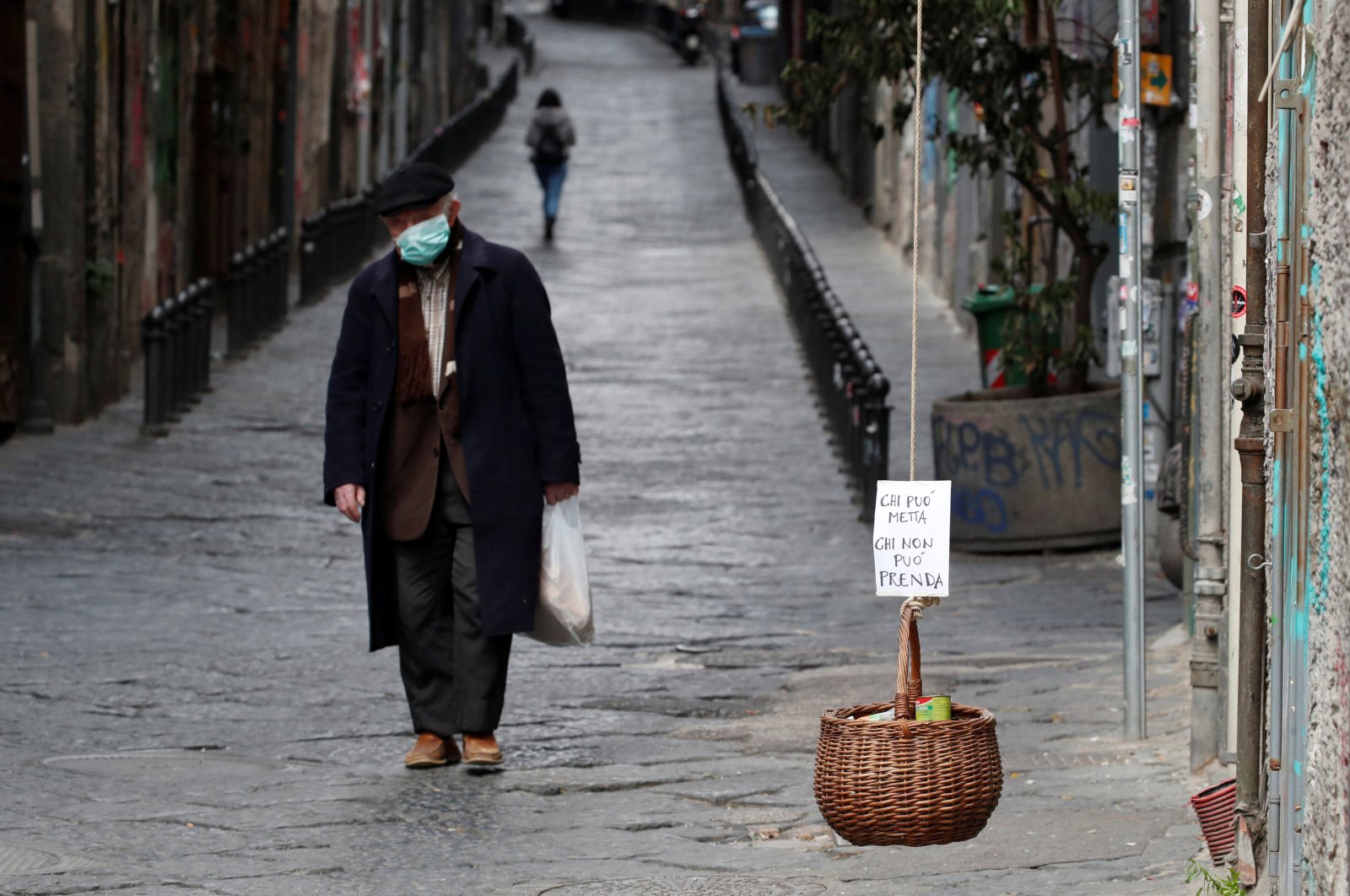 A basket hung up so people can donate or take for free food is seen, as Italy struggles to contain the spread of coronavirus disease (COVID-19), in Naples, Italy March 30, 2020.(Reuters Photo)
by Compiled from Wire Services
Apr 17, 2020 12:03 pm

Italy’s mafia clans are taking advantage of the coronavirus pandemic to buy favor with poor families facing financial ruin by offering loans and food in what is seen as an age-old recruitment tactic, according to prosecutors and officials.

After decades of campaigning to curb the influence of the mafia in its traditional strongholds of southern Italy, officials and charitable groups say the pandemic has created new opportunities for organized crime to regain people’s loyalties.

“We know that ‘families of friends,’ all of them loan sharks, are making themselves available to give money to the people in difficulty,” said Amedeo Scaramella, using a euphemism by which clans of the Camorra criminal syndicate are known.

He told Reuters the sharks start by offering loans at rates that compete with banks and later entrap borrowers by driving them up to 300%.

“We have evidence,” De Raho told Reuters, declining to give details because investigations are ongoing.

Past experience suggests the mob could seek repayment for such largesse in the future by asking recipients to take on activities such as transporting drugs, he said.

“The Camorra knows this is the right time to invest,” De Raho said.

Naples charity worker Antonio Lucidi said his charity L’Altra Napoli (The Other Naples) has raised more than 150,000 euros ($163,065) to deliver food to needy families so they won’t have to accept it from the mob during the lockdown.

Italy’s government has promised 400 million euros of welfare for the poor, including issuing food coupons for those who cannot afford to shop.

Officials believe the coronavirus has badly disrupted the mob economy, in part because the shutdown has made it hard for criminals to move around.

“The collapse of drug dealing is causing serious damage,” said Michele Emiliano, the governor of the southern Puglia region and a former magistrate.

Nicola Gratteri, one of Italy’s best-known prosecutors who lives with a 24-hour police escort because of his investigations of the Ndrangheta clans in southern Calabria, said the mob was more than willing to help small businesses stay afloat now or start up again later.

“Mobsters can buy these properties (if loans are not repaid) and use them for money laundering,” he told Reuters. “Mobsters want less guarantees on loans, because for them the main guarantee is the life of the victim.”

However, according to the La Repubblica, in Palermo, the brother of a Cosa Nostra boss has started distributing food to local residents in the Zen neighborhood where the mafia has had a long-time presence. After the news about “charitable work” broke, the man defended himself through Facebook saying that it was an act of charity and verbally attacked the journalist who reported the news.

According to a professor of criminology at the University of Oxford Federico Varese, mafias are not just criminal organizations.

“They are organizations that aspire to govern territories and markets. Commentators often focus on the financial aspect of mafias, but they tend to forget that their strength comes from having a local base from which to operate,” he said.

Gratteri, who is also the head of the prosecutor’s office in Catanzaro, told the Guardian that mafia bosses consider their cities as their own fiefdoms.

“The bosses know very well that in order to govern, they need to take care of the people in their territory, and they do it by exploiting the situation to their advantage. In the people’s eyes, a boss who knocks on the door offering free food is a hero. And the boss knows that he can then count on the support of these families when necessary, when, for example, the mafia sponsors a politician for election who will further their criminal interests,” he said.

Varese pointed out that these “handouts by the mafias are not gifts.” The mafia does not do anything out of its kind heart. They are favors that “everyone will have to pay back in some form or another, by aiding and abetting a fugitive, holding a gun, dealing drugs and the like.”