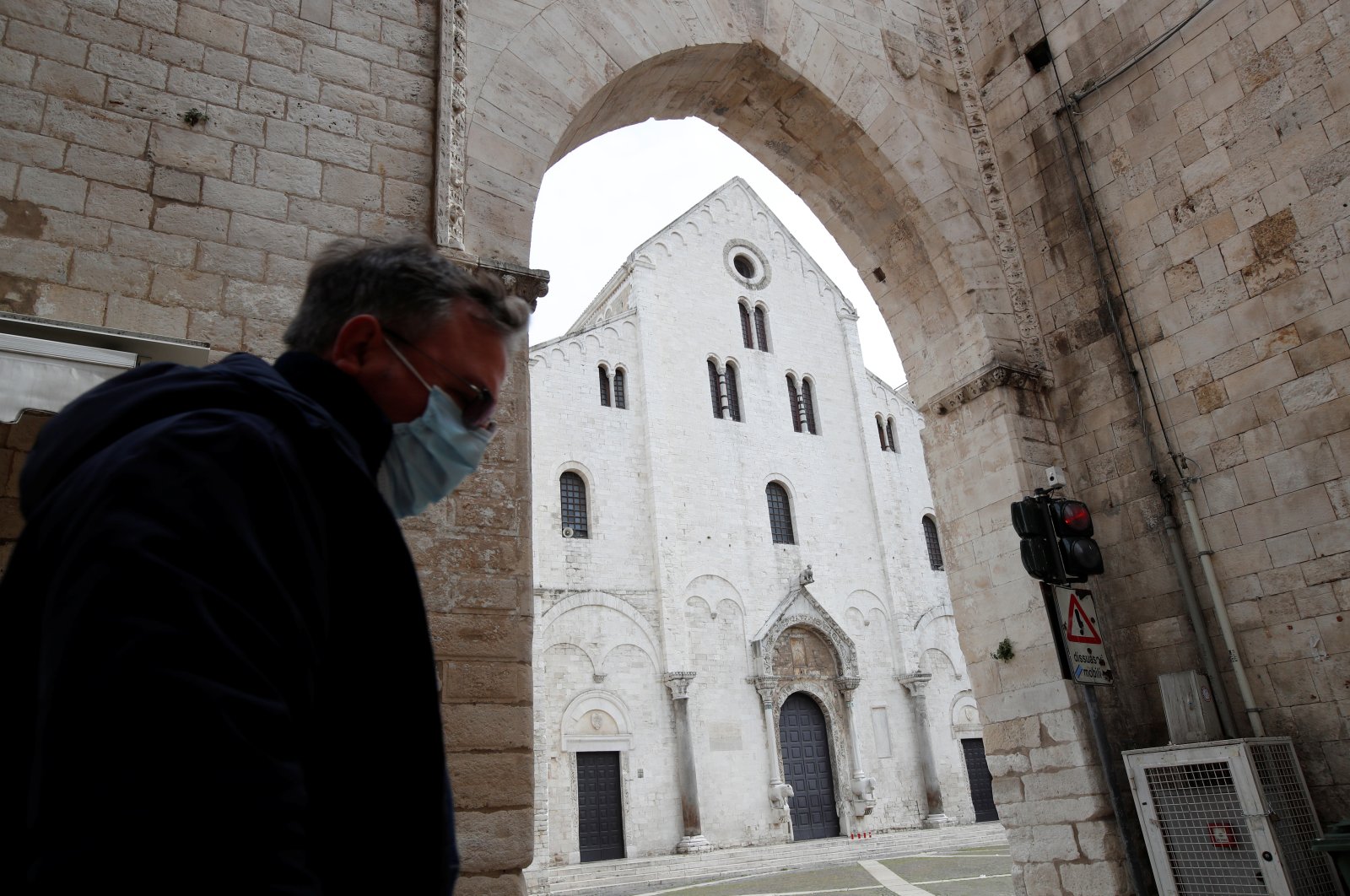 A general view as a man wearing a protective face mask walks past the Basilica of St. Nicholas, protector of Bari as the spread of the coronavirus disease (COVID-19) continues, in Bari, Italy, March 27, 2020. (Reuters Photo)
by Associated Press Mar 27, 2020 7:41 pm
RECOMMENDED

Italy has become the second country to overtake China in coronavirus infections, reaching 86,498 cases on the same day it recorded its single biggest leap in coronavirus deaths, with 969 more victims.

The gruesome milestones nevertheless came on the day that Italian health officials said they were seeing a slight slowing down in new positive cases, two weeks into a nationwide lockdown.

Italy has recorded more virus-related deaths than any other country in the world, and on Friday reported a further 9,134.

The U.S. now has 85,996 confirmed cases, and Italy was set to pass China's 81,782 infections later Friday, according to a count kept by Johns Hopkins University. The three countries account for nearly half the world's more than 550,000 infections and more than half of the roughly 25,000 reported virus deaths.

Analysts warned that all those infection figures could below for reasons that varied in each nation.

Italian epidemiologists warn that the country's numbers are likely much higher than reported – perhaps by five times – although two weeks into a nationwide lockdown the daily increase seems to be slowing, at least in northern Italy.

For most people, the coronavirus causes mild or moderate symptoms, such as fever and cough that clear up in two to three weeks. But for others, especially older adults and people with existing health problems, the virus can cause more severe illness, including pneumonia and death.

Johns Hopkins reported more than 127,000 people have recovered, about half in China.

New York state, the epicenter of the U.S. outbreak, reported 100 more deaths in one day, accounting for almost 30% of the 1,300 fatalities nationwide. Gov. Andrew Cuomo said the number of deaths will increase soon as critically ill patients who have been on ventilators for days succumb.

"That is a situation where people just deteriorate over time,” Cuomo said.

In China, where the virus was first believed to have started, the National Health Commission on Friday reported 55 new cases, 54 of them imported infections. Once again, there were no new cases reported in Wuhan, the provincial capital where the coronavirus first emerged in December. China is barring most foreigners from entering.

Trump, who has repeatedly referred to the outbreak as a "Chinese virus,” struck a different tone, tweeting after the call that "China has been through much & has developed a strong understanding of the Virus. We are working closely together. Much respect!”