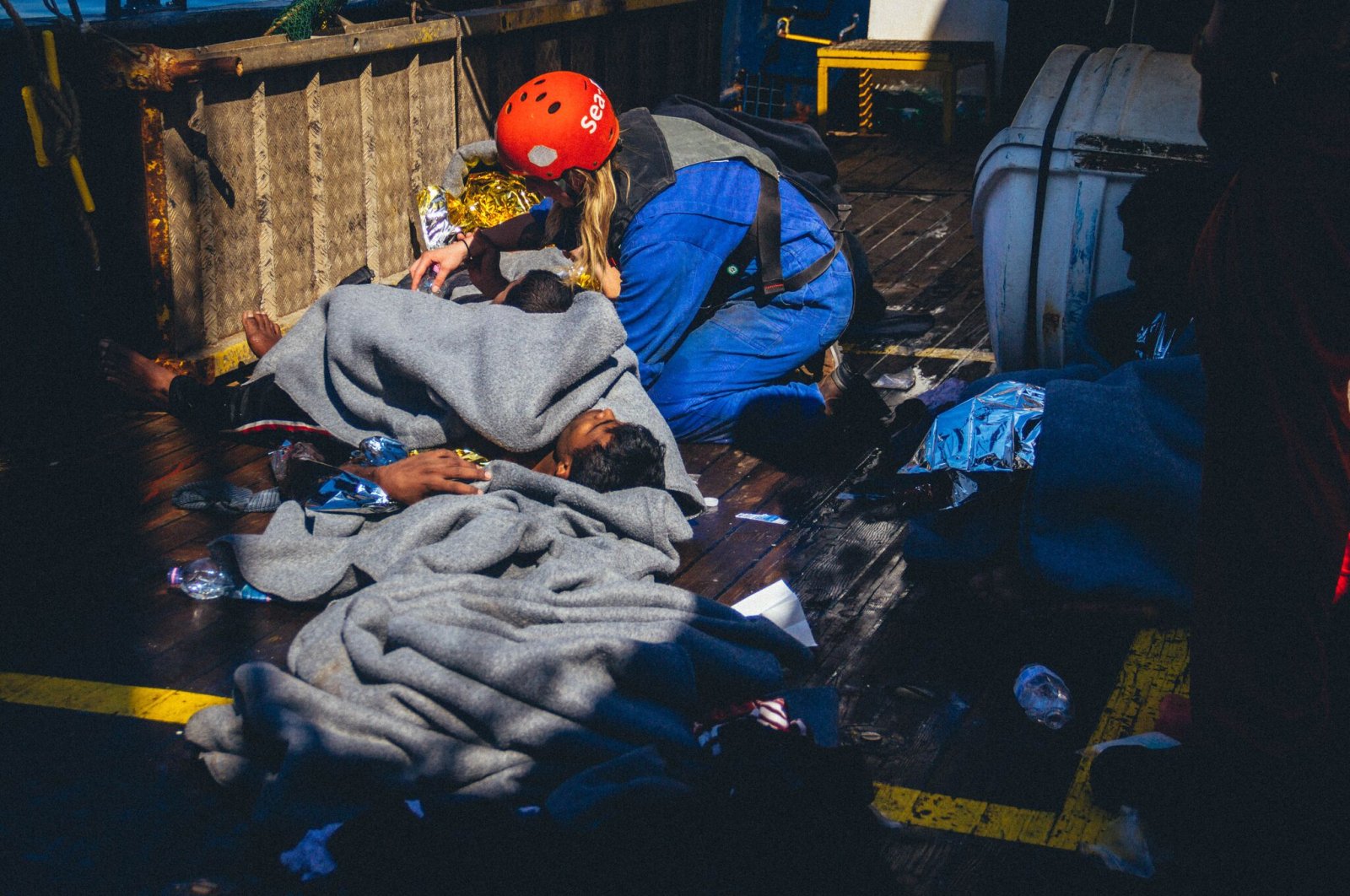 A member of Sea Eye takes care of a child onboard the NGO's vessel "Alan Kurdi" during an operation to rescue people from small boats in distress off the Libyan coast, Monday, April 6, 2020. (AFP Photo)
by REUTERS Apr 08, 2020 5:21 pm
RECOMMENDED

Italian ports cannot be considered safe because of the coronavirus epidemic and will not let migrant boats operated by charities dock, the government has ruled.

The decision was taken late Tuesday after a ship operated by the German nongovernmental group Sea Eye picked up some 150 people off Libya and headed toward Italy.

"For the entire duration of the national health emergency caused by the spread of the COVID-19 virus, Italian ports cannot guarantee the requisites needed to be classified and defined as a place of safety," the decree said.

The national emergency is set to expire on July 31, but the deadline might be extended.

Tuesday's order was signed by the interior, foreign and transport ministers, as well as Health Minister Roberto Speranza, who comes from a leftist party that has always supported migrant protection and charity operations.

After a relative lull in arrivals of boat migrants from Africa, numbers had started to pick up again in the first two months of the year only to fall back sharply in March as Italy was hit by the coronavirus epidemic.

A total of 17,127 people have died from the virus in Italy, the highest number anywhere in the world, while 135,586 cases have been confirmed since the outbreak came to light on Feb. 21.

Charity ships which regularly patrol the coast of Libya looking to rescue migrants from flimsy boats initially withdrew from the Mediterranean at the onset of the health crisis, but the Sea Eye ship Alan Kurdi returned to the area last week.

"Even when life in Europe has almost come to a halt, human rights must be protected," the group said in a tweet Tuesday, announcing it had rescued 150 people. "Now our guests need a port of safety."

In a separate statement, the charity called on Germany to take in the migrants. "After all, Germany is our flag state," it said, adding that Berlin had just managed to bring home 200,000 citizens stranded abroad because of the coronavirus.

"Surely it must be conceivable and humanly possible to send a plane for 150 people seeking protection to southern Europe in order to evacuate the people immediately," it said.

While the Alan Kurdi is sailing in international waters close to the Italian island of Lampedusa because it is banned entry, smaller, autonomous boats continued to arrive with migrants.

A total of 57 people arrived aboard one boat on Wednesday while 70 people came ashore on Tuesday in separate boats.

Locals protested in the center of the main town against the new arrivals. "What is the point of us being locked up in our homes if people keep on coming here and wandering around without any problem," said a man in a video of the protest.