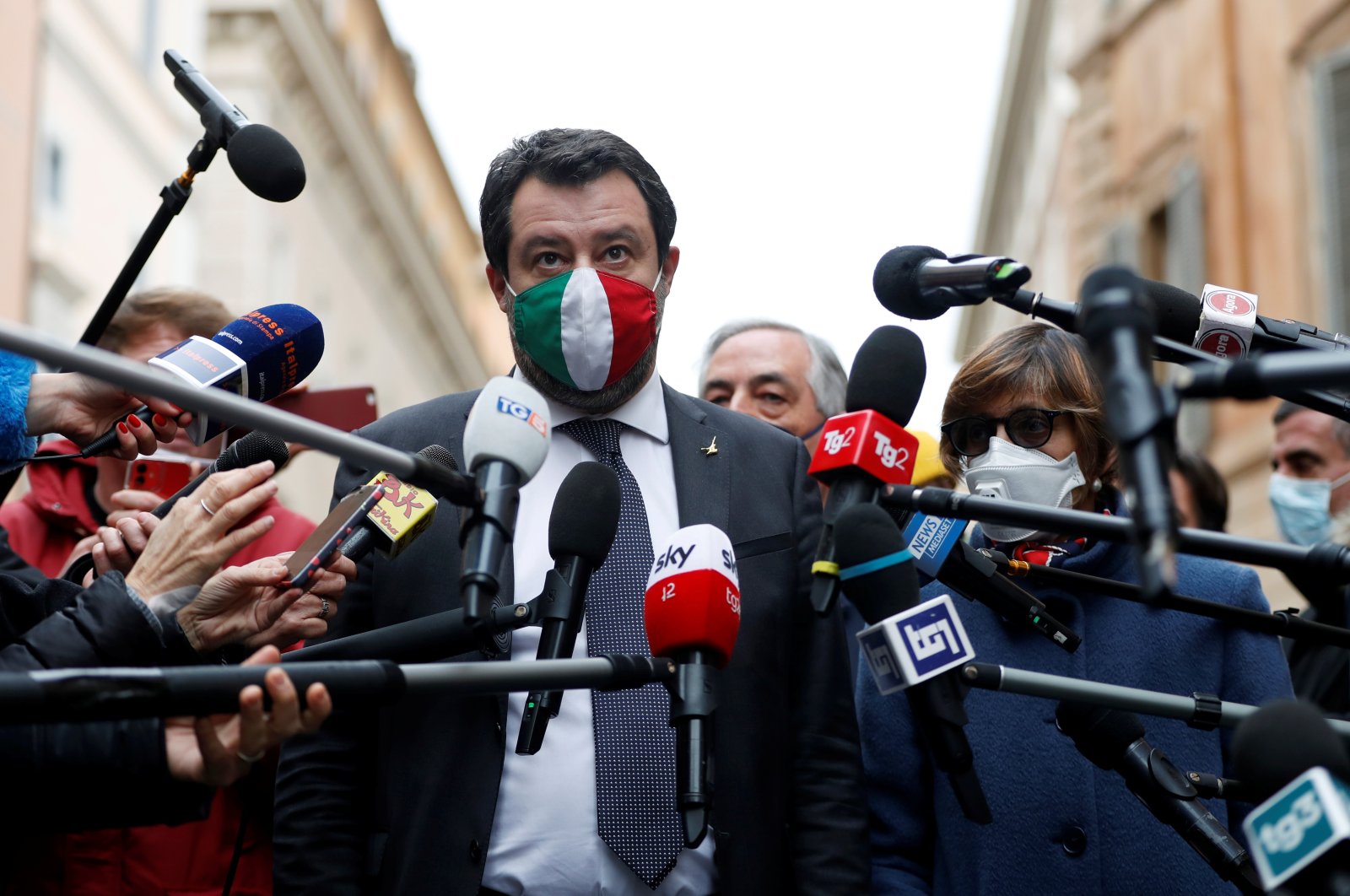 Leader of Italy's far-right League party Matteo Salvini speaks to the media on the second day of consultations between Italy's President Sergio Mattarella and political parties to try and find the basis for a new government, Rome, Italy, Jan. 28, 2021. (Reuters Photo)
by French Press Agency - AFP Jan 29, 2021 11:06 am
RECOMMENDED

Embattled Italian Prime Minister Giuseppe Conte testified Thursday in the case against far-right leader Matteo Salvini, who is accused of illegally detaining 131 migrants at sea two years ago after he prevented them from disembarking from a coastguard when he was interior minister.

Despite a political crisis that threatens his job, Conte appeared before a judge seeking to decide whether Salvini, who is no longer in government, should face trial.

"Prime Minister Conte has been very cooperative, his answers were very detailed," the pre-trial judge, Nunzio Sarpietro, told reporters after a hearing in Rome. "We are not yet talking about crimes, we are talking about a trial in which we need to ascertain if there is a crime," he said.

Sarpietro traveled from Catania in Sicily for the hearing, which comes in the middle of a political crisis sparked by the prime minister's resignation on Tuesday. Conte hopes to return at the head of a strengthened coalition government but President Sergio Mattarella remains in talks with party leaders over whether he can secure a majority in parliament.

Salvini is accused of abusing his powers as then-interior minister when he blocked more than 100 migrants from disembarking from the Italian Gregoretti coastguard boat in July 2019. The leader of the far-right League party formed part of a Conte-led coalition with the populist Five Star Movement (M5S) after the 2018 elections, but quit in August 2019. Salvini's lawyers say the decision to hold the migrants was not his alone but reached collectively within the government.

"I have protected Italy and Italians," he told reporters in Rome on Thursday.

The migrants, mainly from Sudan but also central and western Africa, were rescued in the Mediterranean in two separate operations on July 25, 2019, after five days at sea. They were transferred to the Gregoretti on July 26, then held on the overcrowded patrol vessel under the fierce summer sun despite a scabies outbreak and a suspected case of tuberculosis. Fifteen unaccompanied minors were eventually allowed off on July 29 following pressure from Catania's juvenile court.

The remaining 116 migrants disembarked on July 31 after Salvini said a deal had been brokered with EU countries to take them. He faces a maximum sentence of 15 years in jail if convicted, while a two-year term could see him barred from holding public office for six years. Foreign minister Luigi Di Maio, who was joint deputy prime minister with Salvini during the affair, has been called to give evidence on Feb. 19 in Catania.

Salvini is facing a similar case in Palermo, also in Sicily, over his refusal to allow around 100 migrants held on the Open Arms ship to land in Italy in August 2019.