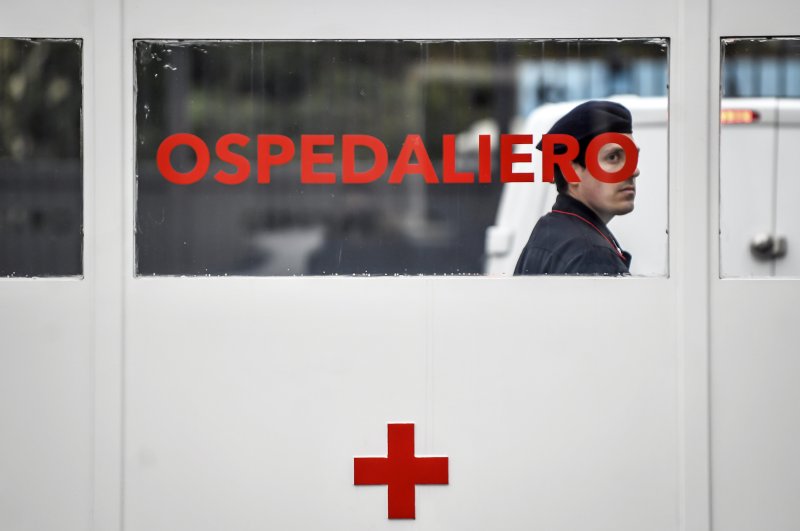 A Carabinieri (Italian paramilitary police) officer on patrol at former military hospital Baggio, which reopened a ward to hospitalize patients recovering from the COVID-19 virus, in Milan, Italy, Tuesday, March 2, 2020. (LaPresse via AP)
by Compiled from Wire Services Mar 03, 2020 8:18 pm

The death toll from an outbreak of coronavirus in Italy has risen by 27 over the past 24 hours to 79, the Civil Protection Agency said Tuesday.

The accumulative number of cases in the country, which has been hardest hit by the virus in Europe, totaled 2,502, up from 2,036 on Monday. The head of the agency said that of those originally infected, 160 people had fully recovered.

The contagion came to light 12 days ago and is focused mainly on a handful of hotspots in the north of Italy. However, cases have now been confirmed in all but one of the country's 20 regions.

The Mediterranean country of 60 million people has quarantined 11 towns in its northern epicenter, with some 50,000 residents barred from leaving for over a week. Churches, bars, libraries, schools, museums and town halls have all been closed in the quarantine zone and shuttered down in the region of Lombardy around Milan, where 38 of the deaths have occurred, as well as the neighboring areas around Bologna and Venice.

Galli said it was too soon say whether these measures have worked. "We will not know that very soon," he said. "It will take days – and I hope not weeks."