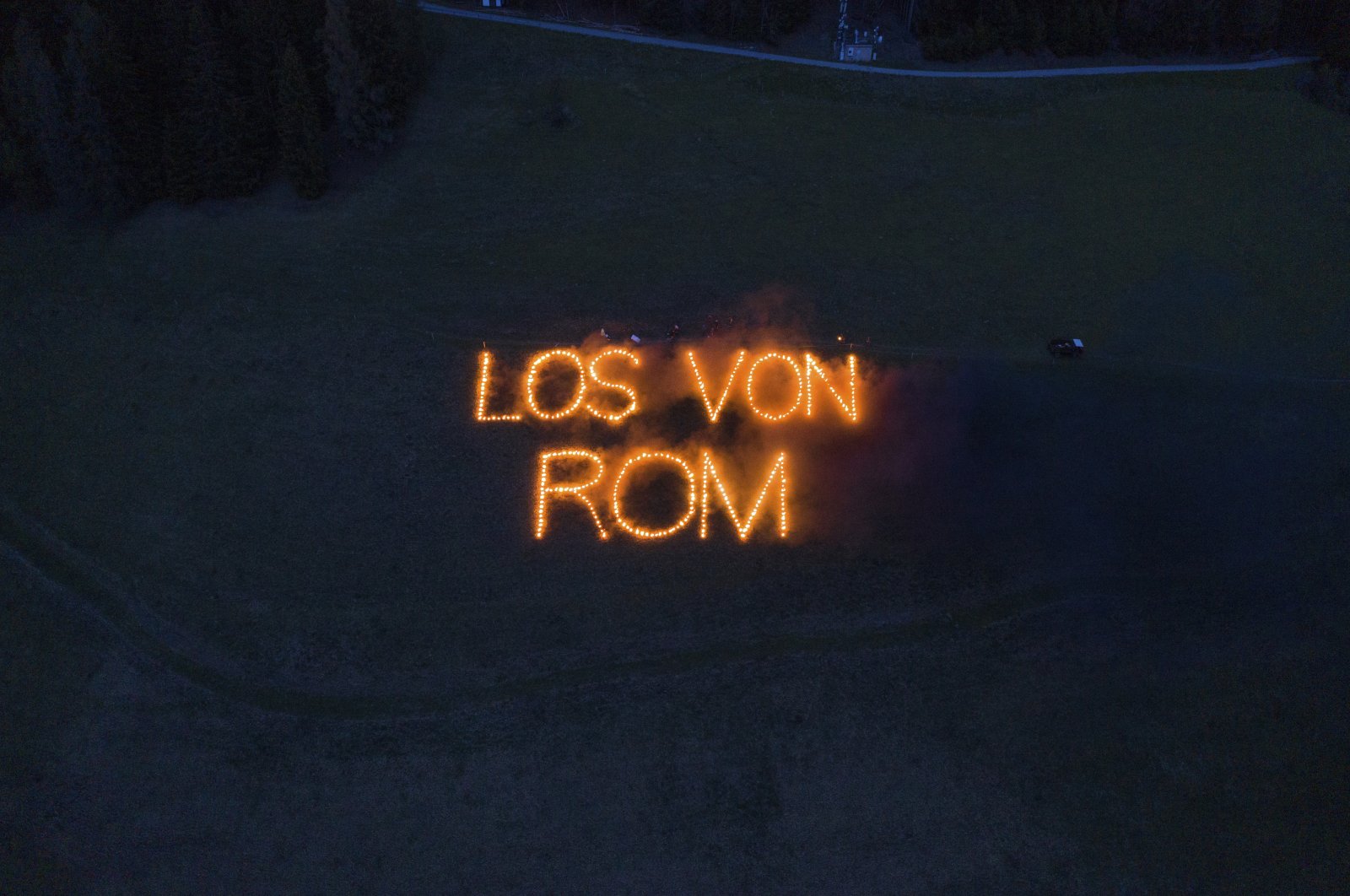 Writing with fire reading in German "Away from Rome", on a field in Val Pusteria, known in German as Pusteral, in the German-speaking province of South Tyrol, Italy, May 2, 2020. (Südtiroler Schützenbund via AP)
by ASSOCIATED PRESS May 13, 2020 6:01 pm
RECOMMENDED

The blazing orange letters of fire spelled out a familiar message in Italy’s South Tyrol province, an old call to resistance repurposed for the days of the coronavirus: ‘’Los von Rom’’ and ‘’Freiheit,’’ German for ‘’Away from Rome’’ and ‘’Freedom.’’

In decades past, the words ignited on a mountainside demanded independence from Rome’s rule for the province’s German-language majority. Now, they vent discontent in South Tyrol, which was once part of Austria, with the uncompromising and indiscriminate way the Italian government imposed a lockdown to slow the spread of the coronavirus.

‘’We have a relatively positive situation regarding the epidemic, with a rate of contagion the lowest in Italy,’’ said Governor Arno Kompatscher, whose South Tyrolean People’s Party has controlled the province since 1948. The party’s legislators in the national parliament back Italian Premier Giuseppe Conte’s government.

‘’We appreciated the actions of the government in the phase of emergency, where it was necessary to move in a united way,” Kompatscher said. “But we are very proud and jealous of our autonomy.’’

While the rest of Italy watched with a mix of envy and curiosity, South Tyroleans wearing masks could browse shops again for items such as a tablecloth needed for a gift, have piercings changed by appointment and visit a hairdresser for a long-overdue haircut.

They sat in Walther Square, near Bolzano’s Duomo, and ate lunch at the prescribed 2-meter distance or drank coffee in bars outfitted with Plexiglas safety screens.

Despite the province’s bold stance, some business owners demurred to Rome, for now.

Alexander Sullmann, a bar owner in the town of Neumarkt, known in Italian as Egna, said he was waiting at least a week to see if clearer safety guidelines for his industry emerge. He was particularly worried about how to enforce rules that forbid more than two people from different households at a single table.

‘’The province gave us the OK, but there are a lot of questions and a lot of rules are not set in stone yet,’’ Sullmann, 30, said,

South Tyrol, or Alto Adige to Italian speakers, is an Alpine province of world-class ski resorts and neatly manicured orchards and vineyards that became part of Italy after World War I. Following a period of violence in the 1950s and 1960s, the German-speaking resistance settled down after Italy implemented the province’s autonomy status, enshrining bilingualism and allowing 90% of local tax revenue to remain in South Tyrol.

The province, with a population of 520,000, today enjoys the highest gross domestic product per capita in Italy and among the highest in Europe at 42,600 euros ($45,500). The pandemic is forecast to contract the economy by as much as 11%, which could get worse depending on the virus’s trajectory.

The head of the region’s 59,000-member chamber of commerce, Michl Ebner, backed the push for South Tyrol to go its own way on emerging from the virus lockdown.

"I understand the concept of solidarity," Ebner said. "But you cannot apply the same rules from Lampedusa to the Brenner Pass. The situations are different."

South Tyrol reported no new confirmed virus cases on Tuesday. The province so far has 2,572 confirmed cases with 290 deaths, both figures representing about 1% of Italy’s totals.

Ebner pointed to a lack of discipline in Italy’s hard-hit Lombardy region during the early stage of an initial lockdown, when cellphone data showed about half of its residents leaving their homes.

In South Tyrol, "when the order was given not to leave home, people didn’t leave their homes," he said. "If here the numbers are improving... we need to take note and award the virtuous."

While the government successfully blocked the southern region of Calabria’s efforts to reopen ahead of the national schedule, South Tyrol managed to avoid significant legal challenges due to its self-governance statute.

Until the flaming words that appeared recently against the night sky, it had been years since fires protesting Rome’s governance burned on local mountainsides.

The leader of the 6,000-strong "Schuetzen," a cultural association that aims to preserve Tyrolean customs and which sees Rome as a foreign power, took credit for igniting the flames. Juergen Wirth Anderlan thinks the "peaceful message" made Kampatscher’s push to open businesses easier to sell to Rome’s minister for regional affairs.

"He could say, 'I don’t have my people under control, there is something bubbling up there'," Wirth Anderlan told the Associated Press. "What the economic federations and tourism federations told the provincial president was probably heavier and carried more pressure than from us. We underscored that with these fires."

Wirth Anderlan said he rejects the violence of past secession moves, although he wants to see South Tyrol become either independent or annexed by Austria. Neither position is on the mainstream South Tyrol political agenda, and both are widely seen as limited to a fringe.

South Tyrol’s governor said the best way to deal with such separatist sentiment is with strong management of the region’s autonomy, which he believes can be an asset to Italy.

"Alto Adige is a little Europe within Europe that is part of the Italian state, where multiple ethnic groups, cultures and languages co-exist, and which can act as a bridge between northern and southern Europe," Kompatscher said.