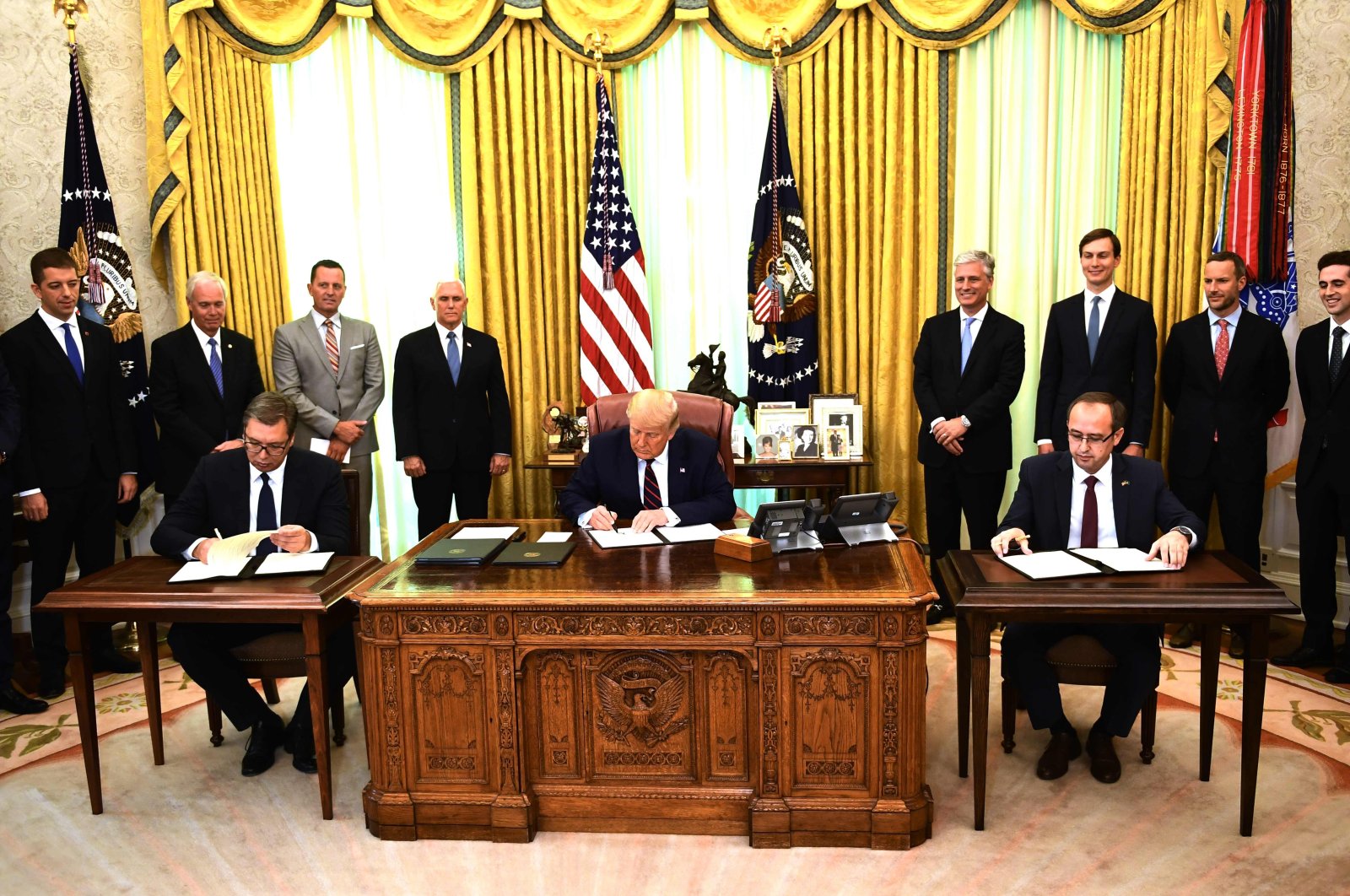 Serbia and Kosovo announced Friday that they have normalized economic ties as part of U.S.-brokered discussions that also include Belgrade moving its Israeli embassy to Jerusalem and Pristina recognizing Israel.

Following the announcement, Israeli Prime Minister Benjamin Netanyahu said that Kosovo has agreed to open its embassy to Israel in Jerusalem, making it the first country with a Muslim majority to do so.

After two days of meetings with Trump administration officials, Serbian President Aleksandar Vucic and Kosovo’s Prime Minister Avdullah Hoti agreed to cooperate on a range of economic fronts to attract investment and create jobs. The White House announcement provided President Donald Trump with a diplomatic win ahead of the November presidential election and furthers his administration's push to improve Israel's international standing.

"Truly, it is historic,” Trump said, standing alongside the two leaders in the Oval Office. "I look forward to going to both countries in the not too distant future.”

Serbia’s decision to move its embassy from Tel Aviv to Jerusalem is a nod to both Israel and the United States. The Trump administration recognized Jerusalem as Israel’s capital in late 2017 and moved the U.S. embassy there in May 2018.

The administration has encouraged other countries to do the same but has been widely criticized by the Palestinians and many in Europe because the Israeli-Palestinian conflict remains unresolved. Kosovo, a predominantly Muslim country, has never before recognized Israel nor has Israel recognized Kosovo.

The gestures to Israel are part of the Trump administration’s push to improve the Jewish state’s international standing, which has included forceful denunciations of criticism of Israel at the United Nations and in other international venues. Most recently, the administration brokered a deal for Israel and the United Arab Emirates to normalize relations. That was followed by the first commercial flight between Israel and the UAE, with neighboring Saudi Arabia and Bahrain to allow such flights to pass through their airspace. Additional Arab states, including Sudan, Bahrain and Oman, have been identified as countries that may soon also normalize relations with Israel.

Kosovo’s Parliament declared independence from Serbia in 2008, nine years after NATO conducted a 78-day airstrike campaign against Serbia to stop a bloody crackdown against ethnic Albanians in Kosovo.

Most Western nations have recognized Kosovo’s independence, but Serbia and its allies Russia and China have not. The ongoing deadlock and Serbia's unwillingness to recognize Kosovo have kept tensions simmering and prevented the full stabilization of the Balkan region after the bloody wars in the 1990s.

"We cannot accept any document which includes Kosovo’s independence, and that’s full stop," Vucic told reporters after meetings Thursday at the White House.

Serbia and Kosovo have already OK’d air, rail and transit agreements, including one that would clear the way for the first flight between Pristina and Belgrade in 21 years. The new agreement comprises many more areas of economic cooperation. Business leaders in both nations have been frustrated and have been talking among themselves about ways to foster investment outside of the ongoing political talks brokered by the European Union.

On Monday, Vucic and Hoti are scheduled to go to Brussels to hold talks under the auspices of the EU’s foreign policy chief Josep Borrell and special envoy for the Belgrade-Pristina dialogue Miroslav Lajcak.

The EU has mediated the talks between the two former wartime foes for more than a decade, and the parallel U.S. effort, although focused on economic development, has not been fully embraced by some EU officials.

The White House summit was originally scheduled for June, but it was canceled after Kosovo President Hashim Thaci, who was to lead the Kosovo delegation, was indicted for war crimes by an international court.