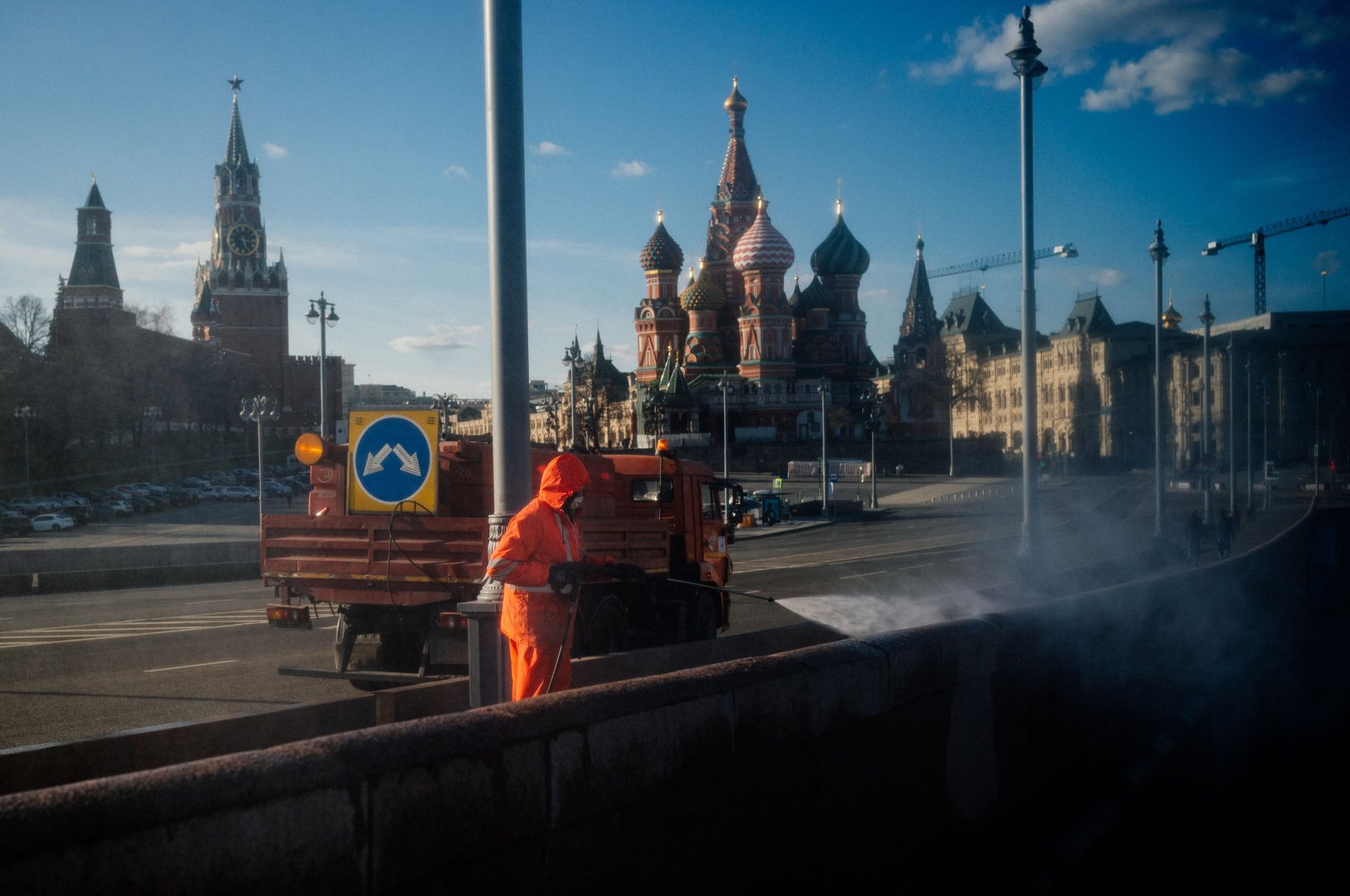 A municipal worker cleans and disinfects a bridge near the Kremlin in downtown Moscow on April 12, 2020, during a strict lockdown in Russia to stop the spread of the novel coronavirus COVID-19. (AFP Photo)
by Daily Sabah with Agencies Apr 15, 2020 1:49 pm
RECOMMENDED

Kremlin spokesman Dmitry Peskov participated in an interview with the media on Wednesday when he said Russian diplomats were looking into a global cease-fire proposal put forward by the United Nations' chief over the coronavirus crisis.

U.N. Secretary-General Antonio Guterres last month called for a cease-fire in conflicts around the globe so the world can focus on fighting the coronavirus pandemic.

"Obviously, the work is underway. The diplomats are working. As soon as the work is completed and agreed on with the partners, corresponding statements will be announced," he told reporters.

The Kremlin spokesman also rejected criticism of Russia's handling of the coronavirus outbreak after China said its largest source of new, imported cases had come from transmissions in its far northeast, bordering Russia.

China's northeastern province of Heilongjiang has become a front line in the fight to keep out imported cases as infected Chinese nationals return from Russia.

"We hear that there is now an exchange of criticism over the coronavirus between different countries, which is played like ping pong. We consider this to be a thankless exercise," said the Kremlin spokesman.

During the interview, Peskov also criticized The New York Times for its article on Russia's “disinformation’ and said that it is a pity that "such reputable publications are publishing more and more nonsense."

Recently, the Times published material accusing Russia of circulating false information regarding health issues that supposedly contribute to the spread of dangerous diseases, including the coronavirus, Ebola and others.

Russian President Vladimir Putin who was speaking at a meeting with senior officials broadcast on state television on Monday said that, if necessary, funds from the Russian Ministry of Defense should be used to combat the coronavirus.

Peskov explained that the president speaking about the army’s resources in the fight against the coronavirus, meant doctors, not soldiers.

“What the president had in mind: our military experts have already gained extensive experience in the fight against the coronavirus, including international experience. They worked and continue to work in very hot spots. And of course, this is an invaluable experience. It can be applied where required,” he said.

Moscow announced on Wednesday that it will review a new electronic permit system to regulate its coronavirus lockdown after large crowds formed in metros as police checked passes. This move came after Peskov described packed metro stations as "dangerous" and "very undesirable," saying this is what Moscow officials wanted to prevent.

But he said early problems with the system could be expected in a city of 12 million residents.

"The first morning, a giant city, naturally, it will not be completely smooth," he told reporters.

He added that city officials had been forced to introduce the travel permits after Muscovites failed to show "proper discipline" when mandatory self-isolation was introduced.

Moscow authorities began issuing digital permits to residents using cars or public transport this week in an effort to reduce isolation violations, with the system coming into effect on Wednesday.

He said he asked authorities responsible for checking the passes to "work in such a way that further inspections would not lead to a mass crowd of people.” In a second tweet, he said the crowds were cleared and that city authorities planned to implement "automatic" controls.

"We'll think about how to do this," he wrote.

News agency TASS reported that the congestion was caused by a lack of police to check permits.

Authorities say they have issued at least 3.2 million passes since Monday.

The permit system is being introduced against the backdrop of a sharp rise in the number of coronavirus infections in Russia, with officials reporting 3,388 new cases on Wednesday.

Members of the armed services, municipal officials and journalists are among those exempt from the permit system.

Work passes will be valid until April 30, while passes obtained to go to a doctor or elsewhere can only be used once.

The digital permit system may be expanded to monitor people going out on foot even within their neighborhood, if needed, authorities have said.

Moscow has been under lockdown since March 30 but is now struggling to cope with the influx of new cases and officials said clinics were approaching their limits.