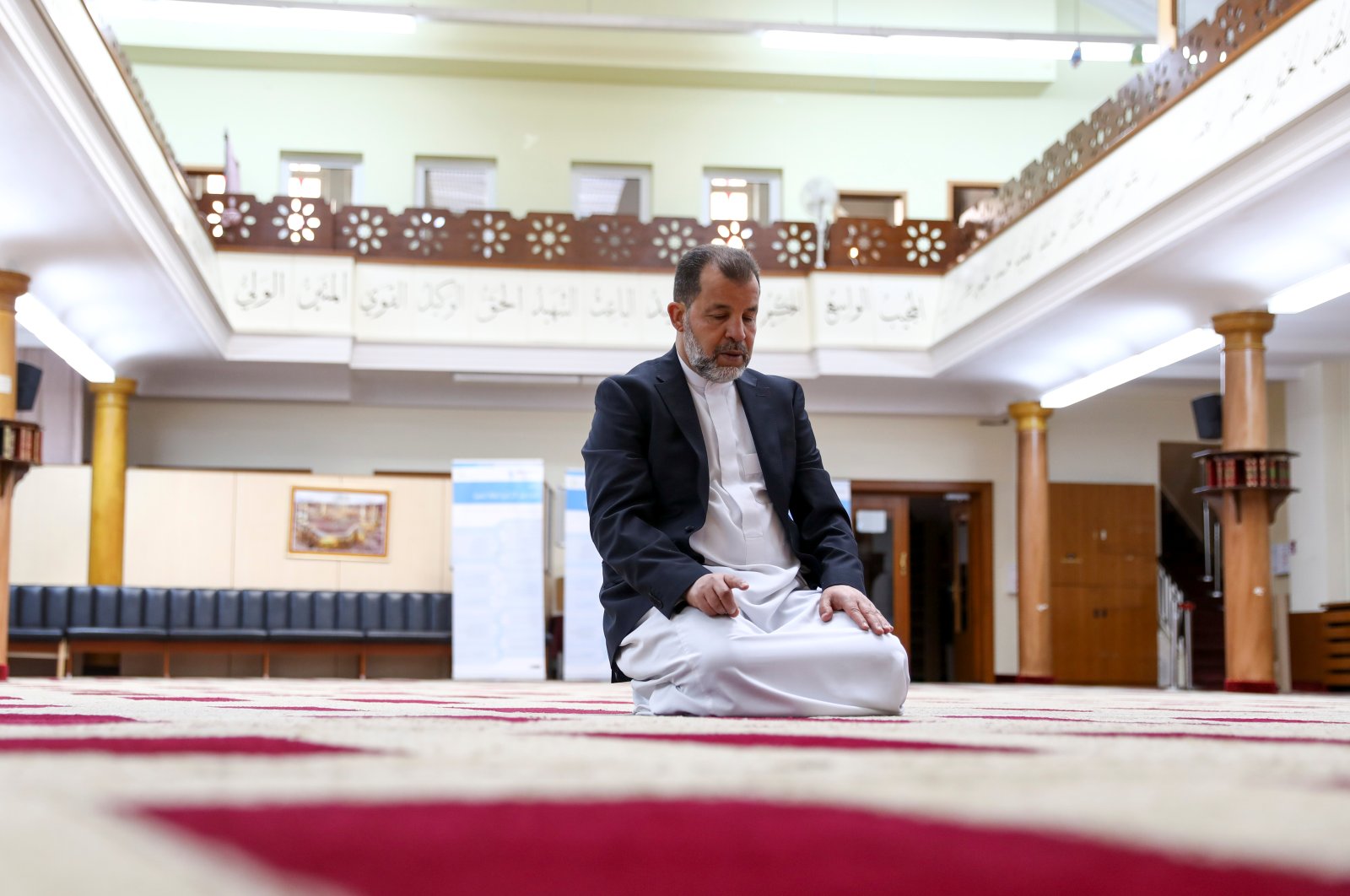 Imam Mohamed Taha Sabri of Dar Assalam Mosque in Neukoelln demonstrates how to perform prayers during an interview with Reuters in the mosque, as the global spread of the coronavirus disease (COVID-19) continues, in Berlin, Germany, April 17, 2020. (Reuters Photo)
by REUTERS Apr 21, 2020 4:13 pm
RECOMMENDED

Mosques in Germany that depend on donations from Friday prayers face bankruptcy as the coronavirus lockdown strips them of their only source of income, which peaks during the month of Ramadan that starts this week.

After five weeks of closure, some have launched online appeals urging members to donate via bank transfers.

But Imam Mohamed Taha Sabri, who runs the Dar Assalam mosque in Berlin's Neukoelln district, said an online campaign had produced only a trickle of donations.

"Mosques are going through a massive crisis," he said in the empty mosque, where hand-washing instructions are displayed on placards next to verses from the Quran. "I think that some mosques are going to be forced to close, especially those which have to pay rent."

Religious gatherings, including Friday prayers, have been suspended since mid-March, when a lockdown was imposed to slow the spread of the virus, which has infected about 143,000 in Germany and killed almost 4,600.

Germany has now allowed some pupils to go back to school and some businesses to open. Yet mosques, churches and synagogues must remain shut.

Mosques have to finance themselves as they do not benefit from hundreds of million euros in state funds given to Christian churches.

The Islamic Council, an umbrella group of 400 mosques, has urged the government to provide financial assistance for mosques, warning that many face bankruptcy because closures will stretch into the holy fasting month of Ramadan, usually a vital period for donations.

In Britain, mosques have also said the lockdown means they have lost a major source of funding, especially in donations from the faithful.

Sabri said the response to the online funding drive by his mosque, where 1,500 Muslims pray on a normal Friday, had been "tepid" and even when the lockdown ends it won't be possible to relaunch charitable activities like free meals.

"We cover about half to two thirds of our expenses from donations made during Ramadan," said Sabri, whose mosque needs 7,000 euros a month to pay its bills. "Unfortunately, this Ramadan is going to be difficult."

He hopes the pandemic will be an opportunity to change the way Muslims give money.

"It's not that they don't want to donate. They need time, they need to be encouraged to move from donating in the mosque during Friday prayers to donating by bank transfer."

Hamzah Al-Suweidi, a Syrian social worker who prayed at the mosque before its doors were shut, said he was not surprised online fundraising was not taking off.

"When you are at the mosque, you see your neighbor put 5 euros in the donations box and you feel you have to give something too. So everyone ends up giving something," said Suweidi. "When you pray at home there is no such pressure."