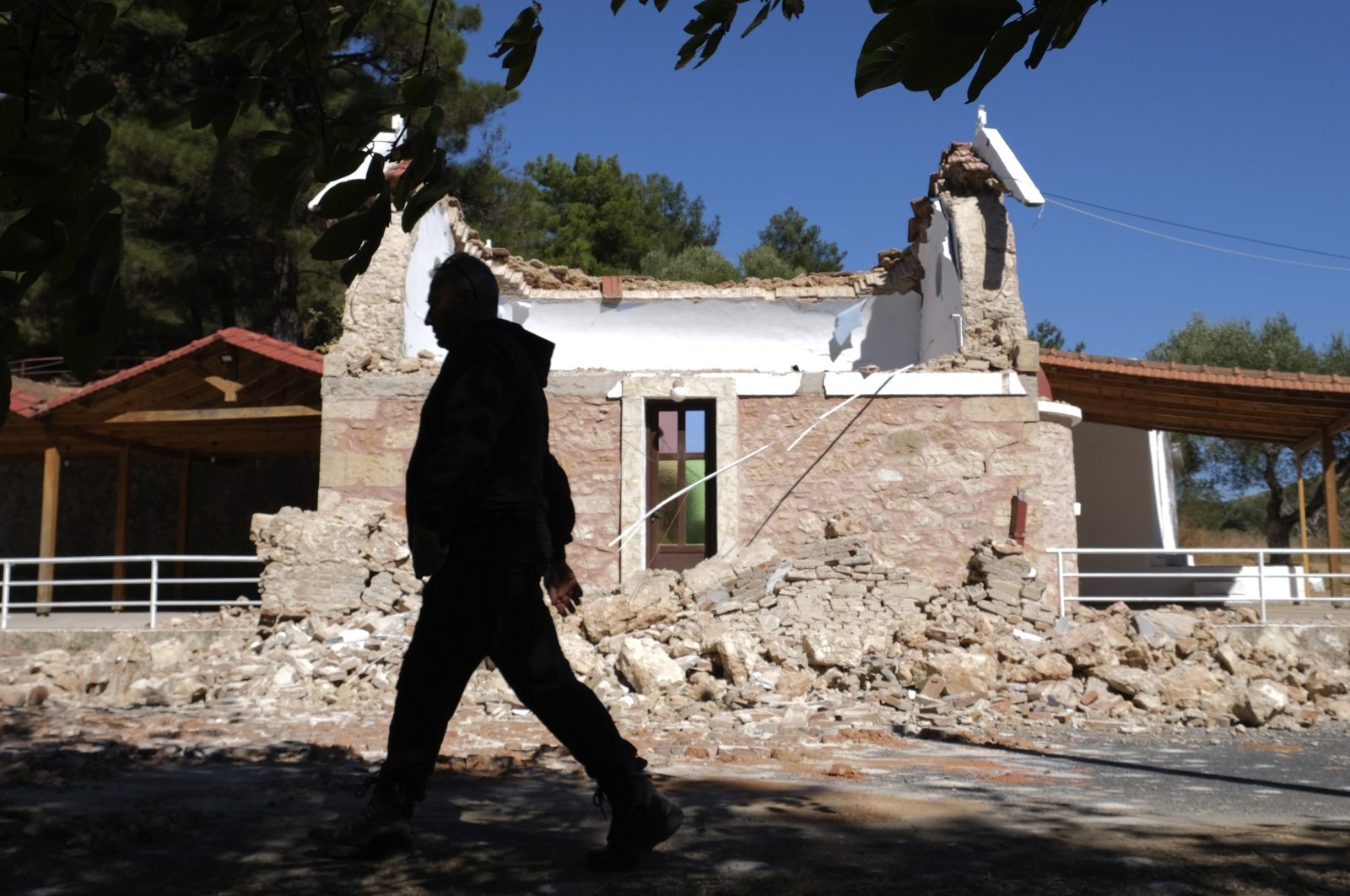 A Resident passes next to a damaged Greek Orthodox chapel after a strong earthquake in Arcalochori village on the southern island of Crete, Greece, Sept. 27, 2021. (AP Photo)
by Agencies Sep 27, 2021 9:32 am
RECOMMENDED

An earthquake with a preliminary magnitude of at least 5.8 struck the Greek island of Crete on Monday, killing one person and injuring several others, while damaging homes and churches and causing rock slides near the country's fourth-largest city.

The Athens Geodynamic Institute said the earthquake, measuring magnitude 5.8, struck at 9:17 a.m. local time, with an epicenter 246 kilometers south southeast of the Greek capital, Athens. The European-Mediterranean Seismological Center (EMSC) and the U.S. Geological Survey put the preliminary magnitude of 6.0, with an epicenter seven kilometers (four miles) north of the village of Thrapsano. It is common for different seismological institutes to give varying magnitudes for an earthquake in the initial hours and days after an event.

The quake was felt on the entire island as well as others like Santorini, a popular holiday destination just north of Crete. Social media users have been responding to the quake, which appears to have been felt by everyone in the epicenter's vicinity. One eyewitness from Mochos told EMSC that the earthquake was "really strong with a lot of buzzing." Another witness from Stalis said that it lasted “several minutes.”

Greece's Climate Crisis and Civil Protection Ministry said that according to reports from local authorities, one person had been killed and a further nine people suffered injuries. The details of the circumstances of the death and injuries were not immediately available.

"This is not an event that occurred without warning. We have seen activity in this region for several months. This was a strong earthquake, it was not under sea but under land and affecting populated areas,” seismologist Gerasimos Papadopoulos said on Greece's state broadcaster ERT.

At least nine aftershocks also struck the area, with the EMSC giving a preliminary magnitude of 4.6 for the two strongest ones. Residents of the city of Heraklion rushed out into the streets. Local media in Crete reported damage, with collapsing walls of old stone buildings in villages near the epicenter of the temblor on the eastern part of the island.

Heraklion mayor Vassilis Lambrinos told Greek Skai television that there were no immediate reports from emergency services of any injuries or severe damage. He said schools were all evacuated and were to be checked for structural damage.

Meanwhile, across the Agean Sea in Turkey, the quake was felt along the coastline in the district of Datça.

Greece lies in a highly seismically active region. The vast majority of earthquakes cause no damage or injuries. In October, 2020 a magnitude 7.0 hit in the Aegean Sea between the Greek island of Samos and the city of Izmir in western Turkey. Most of the damage was in Turkey, where 114 people were killed and more than 1,000 injured. In Greece, two teenagers were reported dead on Samos.