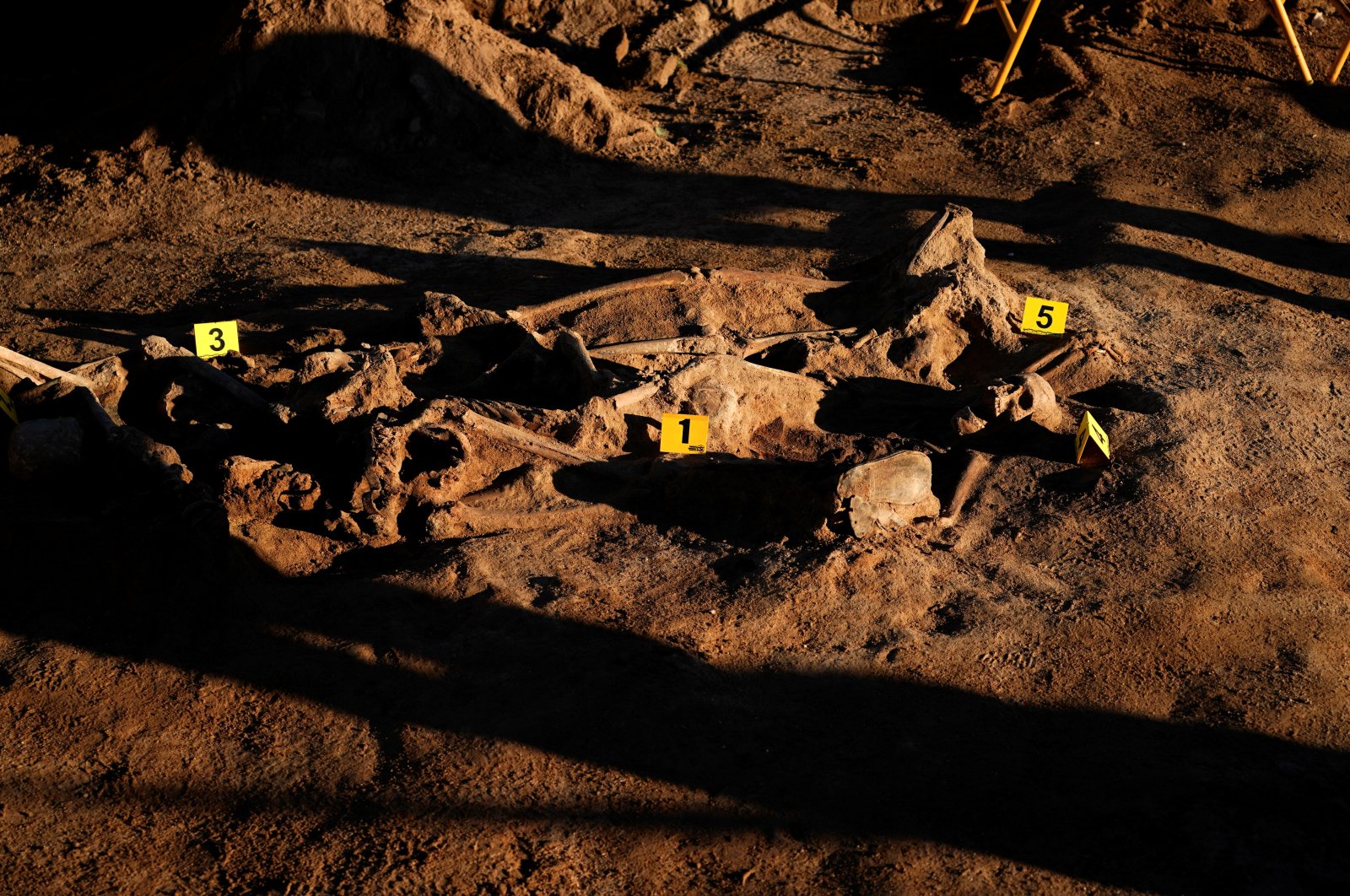 The remains of some of the people killed by the forces of dictator Francisco Franco in November 1936, are seen during the exhumation of a mass grave by the Association for the Recovery of Historical Memory (ARMH), in Recas, Spain Nov. 17, 2021. (REUTERS Photo)
by Anadolu Agency Nov 17, 2021 8:16 pm
RECOMMENDED

Just a few days shy of 85 years later, the bodies of seven men who died during the Spanish Civil War have been uncovered in a mass grave found in Tolido's village Recas.

Their bones are being exhumed by the Association for Recovery of Historical Memory with the help of the victim’s families and the local community.

Paloma Sevilla, whose grandfather was one of the victims, brought her 5-year-old grandchild to watch the exhumation.

"It’s a bittersweet feeling. On one hand, we are happy that his remains have been found and that he will soon get a proper grave. On the other, we are saddened by all the suffering that my family went through,” she told Anadolu Agency (AA).

When Sevilla was a child, she spent hours digging in the same field alongside her mother to find her grandfather’s body, she said.

More than 143,000 people went missing or were forcibly disappeared during the Spanish Civil War between 1936-1939 and the subsequent dictatorship that lasted until 1975, according to a list of names submitted by a victim platform to Judge Baltasar Garzon.

No one is sure exactly how many mass graves still exist in Spain, but the Spanish association estimates there to be thousands more. So far, the association has exhumed and identified the remains of around 1,650 people from mass graves.

Spain’s 1977 Amnesty Law, which was created during Spain’s transition from a dictatorship to democracy, effectively impeded investigations over the human rights violations that took place during the previous years.

It not only kicked off a wave of exhumations of victims but the law was also used in 2019 to exhume the body of Fransisco Franco himself from the massive Valley of the Fallen mausoleum so it could be reburied in a family plot.

Spain’s current progressive government seeks to go further with a bill that reinforced historical investigations and could even open the door to persecuting crimes committed by Spain’s fascist forces.

However, the bill is currently under negotiations and nationalist groups from Catalonia and the Basque Country, whose support is required for the bill to pass, want even more. They are calling for the country to completely overturn the Amnesty Law, something the U.N. has also championed.

After years of institutional silence, the unearthing of bodies from the Civil War and Franco-era has become a common occurrence in Spain.

Last month, another association found a grave in the northern village of Belchite that contains as many as 150 people who were slaughtered just days after the Civil War broke out in July 1936.