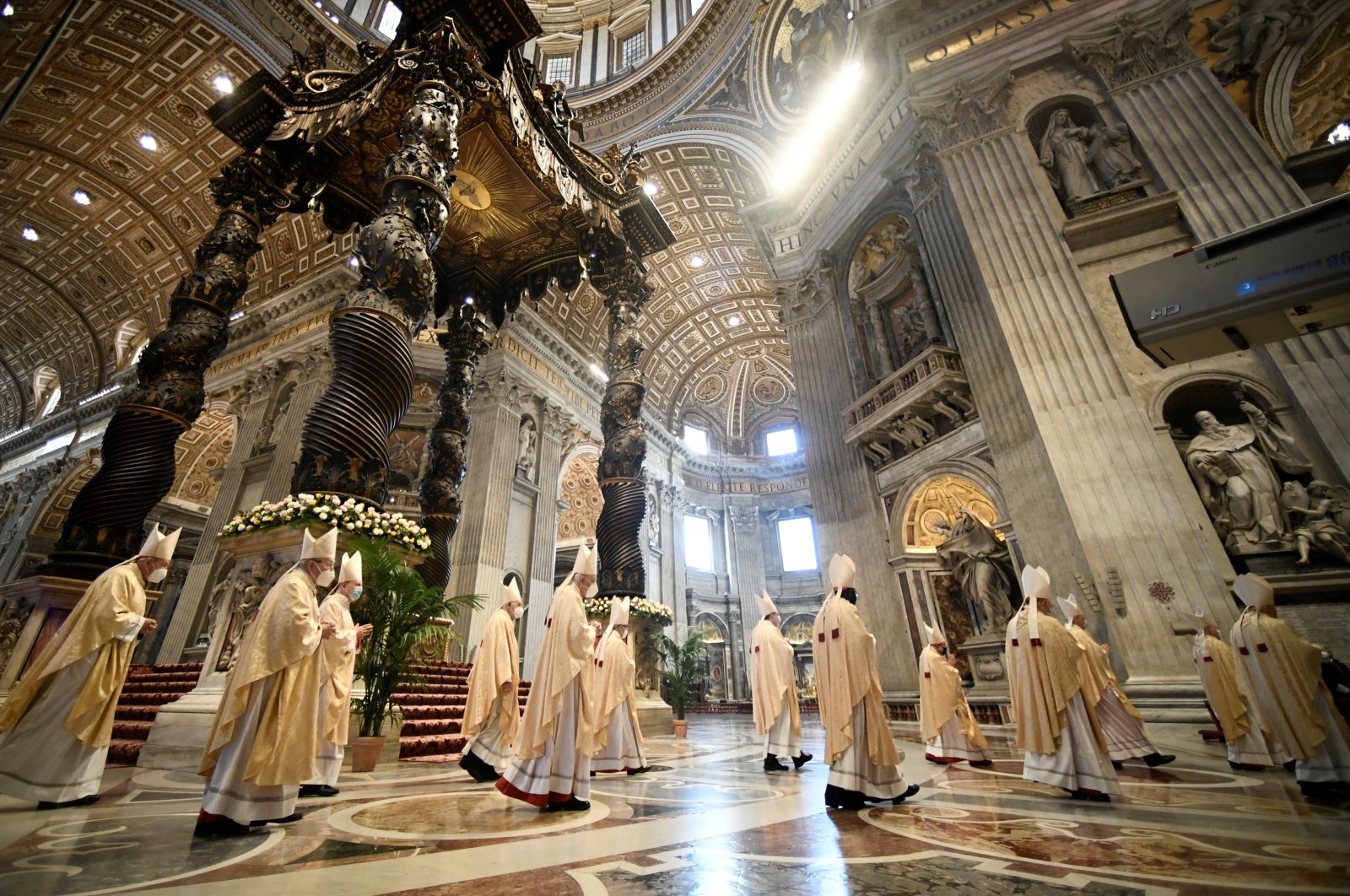 The coronavirus pandemic has once again darkened Easter celebrations for millions of people around the world who remain under tight lockdowns amid worrying COVID-19 surges.

During his traditional Easter address, Pope Francis denounced as "scandalous” Sunday how warfare continues to rage and military arsenals are fattened around the world as the coronavirus pandemic causes social and economic suffering.

Francis tempered his "Urbi et Orbi″ address (Latin for ”To the city and to the world”) wishes of joy on the Christian feast day along with accounts of pain from the globe's many armed conflicts and other sources of violence in Africa, the Middle East, Asia and Eastern Europe. He also appealed anew to the international community to overcome delays in distributing COVID-19 vaccines and to ensure supplies reach the poorest countries.

"Everyone, especially the most vulnerable among us, requires assistance and has the right to have access to necessary care," the pontiff said.

Describing vaccines as an ”essential tool" in the pandemic battle, Francis called for a "spirit of global responsibility” as he encouraged nations to overcome "delays in the distribution of vaccines and to facilitate their distribution, especially in the the poorest countries.” He sounded a note of indignation at the start of his address, decrying that there has been no shortage of warfare during the pandemic.

"The pandemic is still spreading, while the social and economic crisis remains severe, especially for the poor. Nevertheless - and this is scandalous - armed conflicts have not ended, and military arsenals are being strengthened,'' Francis said, sounding angry.

Tighter curbs have come into effect in Belgium as well as in France, where authorities are scrambling to deal with a serious spike in cases that has overwhelmed hospitals in Paris.

Across the Atlantic, Canada crossed the threshold of 1 million coronavirus cases as it battled a new wave of infections, forcing several provinces to tighten restrictions ahead of the Easter weekend.

And celebrations have been dampened in South America too, where Brazil is in the grips of a devastating outbreak likely fuelled by a more contagious variant. The worrying situation on the continent forced Peru to go into an Easter lockdown, Bolivia to seal its frontier with Brazil and Chile to close all borders.

The pandemic has claimed more than 2.8 million lives worldwide, but populations are growing increasingly frustrated with movement restrictions. Thousands protested in the German city of Stuttgart on Saturday against COVID-19 restrictions, with a heated debate underway in the nation about tightening measures in the face of a third wave of infections.

Such demonstrations have become a regular occurrence in Germany, bringing together members of the extreme left and far-right as well as conspiracy theorists and anti-vaccine campaigners. Misinformation about vaccines has been a major problem in the fight against COVID-19, fueled by how rapidly baseless conspiracy theories about the pandemic can proliferate on social media.

A dramatic illustration of its impact is in Serbia, where the government is desperately trying to convince people to get vaccinated and has around a million doses available – a buffet of Pfizer, AstraZeneca, Sputnik V and Sinopharm shots.

"I beg you, people, get a vaccine," Serbia's President Aleksandar Vucic pleaded recently. "We have them and we will have more, I beg you, in the name of God, take them." Serbia's leading epidemiologist Predrag Kon said the slow takeup is "solely a consequence" of anti-vaccine misinformation online.

France reported on Saturday that 5,273 people were in ICUs for COVID-19, a rise of 19 from the previous day, as the country entered its third national lockdown to help combat the pandemic.

The government had been trying to keep the lid on new COVID-19 cases with curfews and regional measures but from Saturday, and for the next four weeks, schools and nonessential businesses across the country will remain shut. The rise in ICU patients on Saturday followed a much bigger jump the day before, the highest in five months, at 145. President Emmanuel Macron has pledged more hospital beds to care for critically ill COVID-19 patients.

Macron had hoped to steer France out of the pandemic without having to impose a third national lockdown that would further batter an economy still reeling from last year's slump. But new strains of the virus have swept across France and much of Europe, amid a slower rollout of COVID-19 vaccines in the European Union than in some countries including Britain and the United States.

Health authorities did not publish new case numbers on Saturday, citing a problem with the flow of data from some test results.

According to an Ifop poll of 1,021 people carried out online on April 1 and published on Sunday in Le Journal du Dimanche (JDD) newspaper, a majority of French people expressed misgivings over the government's handling of the pandemic. Fifty-eight percent of people said they did not trust the vaccination campaign would be carried out according to plan, as Reuters reported.

However, a majority of people, 51%, said they did plan to get a COVID-19 vaccine, with only 34% saying they would not. Another 15% said they had already been inoculated.

Macron has vowed to speed up France's vaccination campaign, and the defense ministry said late on Saturday that seven military hospitals would be mobilized from April 6 to administer doses.

Italy entered a three-day nationwide coronavirus lockdown Saturday to deter Easter travel and get-togethers even as the country's variant-fueled spike in new infections began to wane. The government had announced last month that it would place all regions into the strictest "red zone” lockdown over the Easter weekend to limit the chances of contagion, taking the same precautions it enforced over Christmas and New Year’s. Travel between regions and visits to relatives were being limited through Monday.

Nonessential shops were closed and restaurants and bars were only open for take-out. "People are tired, but they are aware that protecting health is essential in these times,” said Maj. Fabio Palletta, a Carabinieri military police officer manning a checkpoint in Rome on Saturday, one of many set up around the country this weekend to ensure people on the roads were authorized to travel.

The interior ministry also ordered up extra foot police patrols to break up large gatherings in squares and parks, which over Easter are usually packed with picnic-goers. "I’m glad they are doing checks. It means something is working in this whole mess,” Amato Monatanari, who was pulled over for a check in Rome, said, according to remarks carried by The Associated Press (AP).

Italy, where Europe's outbreak began, has recorded more than 110,000 COVID-19 dead, more than any other European country but Britain, and it reported another 21,000 infections on Saturday, along with 376 dead.

An estimated 87% of Italy's newest cases have been traced to the highly contagious variant first detected in Britain. But the health ministry reported Friday that for the second week in a row, new cases had "slightly diminished.” But because Italian hospitals in most regions are still well over their COVID-19 capacity in both intensive care units and other wards, the ministry concluded that new infections were still "too high ... to allow any reduction in current restrictive measures.”

In the Himalayan kingdom of Bhutan, however, vaccinations are proceeding at a fast pace, with authorities giving at least one shot to 60% of its population of less than a million. Neighboring India is meanwhile battling a new surge, expanding its vaccination program on Thursday to the 45-60 age group.

The country is aiming to inoculate 300 million people by the end of July. Experts have warned that infections in the vast South Asian nation are increasing at a faster pace compared with last year. Bollywood actor Akshay Kumar on Sunday became the latest Indian celebrity to test positive, following cricket superstar Sachin Tendulkar last month.

Neighboring Bangladesh will implement a lockdown from Monday as it grapples with a sharp rise in infections, amid reports that hospitals are struggling to cope.