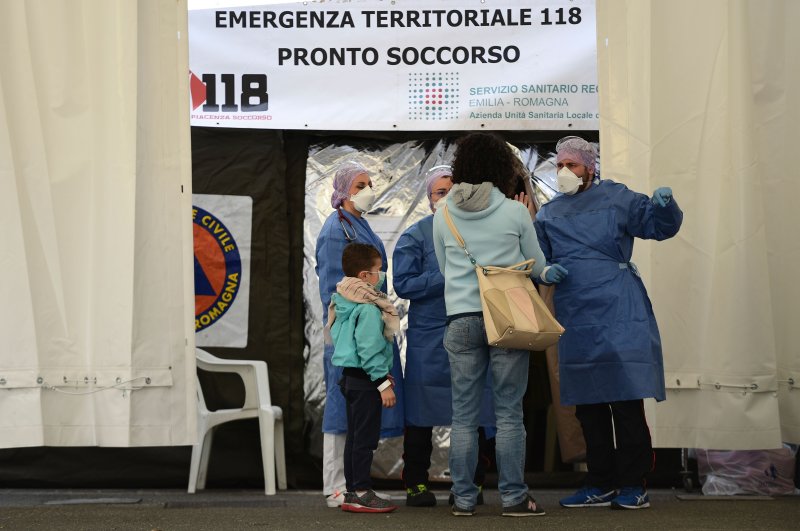 A woman and a boy receive information from medical staff at a sanitary tent installed outside a hospital, Piacenza, Italy, Feb. 26, 2020. (AFP Photo)
by Daily Sabah with Agencies Feb 27, 2020 9:49 am
RECOMMENDED

As coronavirus infections proliferate around the world, for the first time there were more daily cases reported outside China than inside the country, where the virus first emerged in December, the World Health Organization (WHO) said Wednesday. The number in China was 412, while the tally in the rest of the world was 459.

Outlining the alarming development during a briefing in Geneva, WHO Director-General Tedros Adhanom Ghebreyesus said that on Tuesday, there were 2,790 cases and 44 deaths in 37 countries outside of China.

China is no longer the only breeding ground for the deadly virus. The contagion appears to emanating from other hotbeds of infection, including Iran, South Korea and Italy. According to the WHO, the epidemic has peaked at its epicenter in China, where it has killed more than 2,600 people and infected over 77,000 others. However, the situation has worsened elsewhere.

Concerns are intensifying over the growing number of confirmed novel coronavirus cases in Europe and the Middle East, fanning fears of a pandemic. While the epicenter of the outbreak in Europe is spreading to more countries with vacationing Italians, multiple nations in the Middle East struggle to contain the deadly outbreak spreading from Iran.

In the Middle East, Iraq has confirmed its sixth case of coronavirus in a young Iraqi man in Baghdad who had traveled from Iran, the health ministry said Thursday. Iran reported at least 22 deaths across the country Wednesday. The latest health ministry figures show the virus has spread to all four corners of the country. Several of Iran's neighbors have closed their borders and banned flights from Iran due to fears over the virus, which could hurt Iran's already fragile economy. Kuwait, Iraq, Bahrain, Oman, Lebanon, the United Arab Emirates and Afghanistan have all reported cases of coronavirus involving people who traveled to Iran.