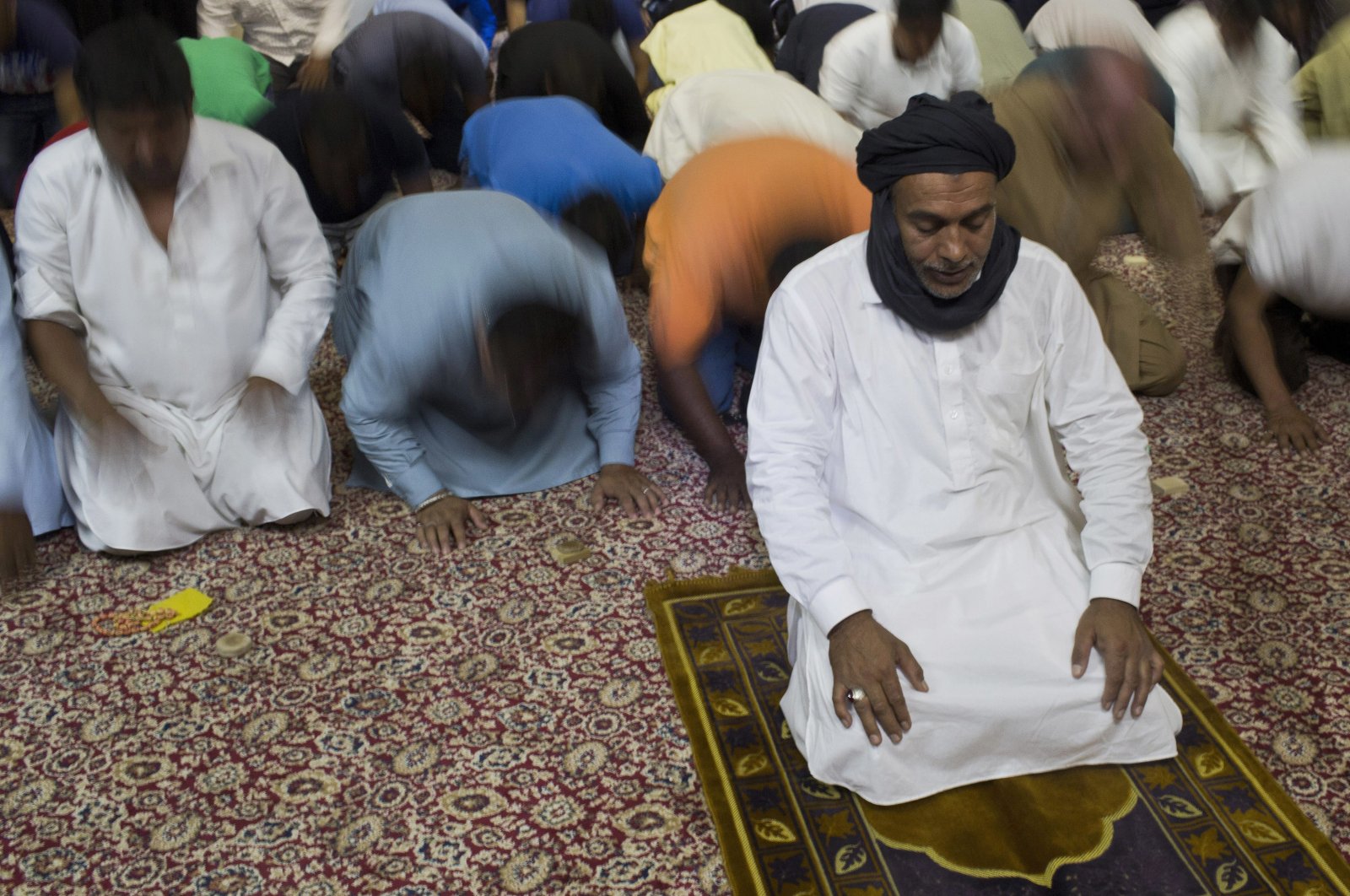 For the first time since the 19th century, Athens on Tuesday witnessed the inauguration of an official mosque, as years of efforts by the Muslim community finally paid off. The move has finally shaken off the city's infamous reputation as the only European capital with no mosque, a status that was criticized by Muslims around the world.

Greek daily Ekathimerini announced Tuesday that the mosque's inaugural prayers were held under social-distancing measures due to rising COVID-19 cases in Greece.

The mosque's first imam is Zaki Mohammed, 49, a Greek citizen of Moroccan origin, the paper said.

Supervised by the Greek state, the 350-capacity mosque, which has neither minaret nor dome, is situated in the industrial area of Eleonas, near a refugee camp.

The decision to build a mosque in Athens was first made in 2006 with a budget of 887,000 euros ($1.04 million), but bureaucratic hurdles, protests by far-right groups and legal challenges stalled the process.

“A long effort by successive governments since 2006, when Law 3512 was passed, has been completed. Greece sends a clear message inside and outside the country of democracy, religious freedom and respect,” said General-Secretary of Religions Giorgos Kalantzis back in September.

Although an official inauguration ceremony took place on June 7, 2019, when the SYRIZA government’s minister for religious affairs, Kostas Gavroglou, presented the mosque to the people of Athens, the move was not followed by prayers. Instead, once the ceremony ended, the site was locked and has remained so ever since. The building along with its playground and park was left neglected by authorities until today.

Following this initial inauguration ceremony, the imam Mohammed said: “I would like to start by thanking Allah that we finally have a mosque where we can pray, we can gather, we can talk about our matters.”

However, the mosque's struggle dates back more than a decade, as it had to fight multiple confrontations and obstacles to establish itself as the only official Muslim prayer hall.

Back in 2006 when the legislation allowing the construction of the mosque was initially passed under Minister Marietta Giannakou, the move was welcomed by many, in accordance with the zeitgeist. However, as Giannakou's term came to an end, the fate of the mosque began to shift as well. The project was stalled immediately and remained that way for three long years until Deputy Prime Minister Theodoros Pangalos and Education Minister Anna Diamantopoulou revived the project.

During the following years, until its initial inauguration in June 2019, seven pieces of legislation related to the mosque have been voted on by the parliament, with the majority of them focusing on problems related to its zoning. None of the legislation had difficulty in passing as all parties, except for the far-right groups, supported the mosque's construction.

However, the project received backlash mostly from the Church of Greece and religious organizations themselves, which ultimately led to several issues over the construction of the mosque. The biggest issue was the fact that construction firms were reluctant to take part in the project as they were wary of a possible public reaction that could hurt their prestige. Although the Church of Greece had officially backed the project, statements by religious authorities, including the late Archbishop Christodoulos and his successor Ieronymos, the metropolitan bishop of Piraeus, proved otherwise. They opposed the project in 2011 and applied to the Council of State to annul the decision to construct the mosque.

On Feb.1, 2019, Financial Times' Madeleine Speed published an article titled "The battle to build a mosque in Athens," revealing the struggles that the mosque had to face through the years.

Visiting the construction site, which was closed at that time, Speed wrote:

"The entrance looks more like a barricade, fortified with barbed wire and corrugated iron. Above four wooden crucifixes fixed to the wire, the words 'Orthodoxia i Thanatos' (Orthodoxy or Death) are emblazoned in red spray paint. To the left of the locked gate, leaflets bearing racist and nationalist slogans are layered over graffiti scrawls of 'Stop Islam.'"

Speed conducted an interview with Naim el-Ghandour, who runs the Muslim Association of Athens and has spent years lobbying politicians, for her article. “I try to stay romantic about Greece and not feel that (politicians) manipulated me,” el-Ghandour, an Egyptian businessman who has lived in Greece since 1974, told Speed.

“My children go to school, to university, live equally with Greek children. But when they go to pray, one goes to church and the other goes to an underground garage. This proves to the young Muslim that he is not an equal citizen,” he continued.

In her article, Speed also pointed out a survey conducted by the Dianeosis Research and Policy Institute back in 2017, with the title "What Greeks Believe Ιn 2017." The survey reveals that only 36.3% of Greeks react positively to the word "Muslim," showing the attitude of Greece's public toward Islam.

Although all the efforts to halt the construction of the mosque collapsed eventually, the coronavirus emerged as another obstacle to the opening of the mosque, causing the finite opening date to be delayed again.

"Procedures were to a certain extent delayed during the pandemic, but we are speeding up work and aim to have the mosque running by the end of autumn," the ministry of education and religious affairs said in a statement to Agence France-Presse (AFP) at that time.

Another government source said the end of October was a realistic target "barring another lockdown," which, eventually, proved to be true.

Since 1890, there have been multiple attempts to build a mosque in Athens.

Several laws have been passed on creating an official mosque in Athens since 1890. Attempts have taken place back in 1934 and 2004, and yet, none of them succeeded.

There are an estimated 300,000 Muslims in the greater Athens area, who are forced to offer their prayers in unofficial masjids, basements and bunkers.

Even the presence of unofficial masjids is not acceptable to the Greeks as back in June, the country ordered one of the oldest Muslim prayer halls in the greater Athens metropolitan area to shut down.

Saying the facility lacks a license to operate, the Education and Religious Affairs Ministry gave a 15-day notice to clear the premises in Piraeus, a port city just 12 kilometers (7 miles) from the Athens city center.

“We are sad to announce that we received a closure order for one of the oldest prayer halls of the capital ... without any chance of negotiating with the ministry," said the Muslim Association of Greece in a press release.

The Al Andalus prayer hall has been operating since 1989, according to the association.

The Turkish Muslim minority in Greece, however, has complained that their exercise of religion is stifled, including the right to choose their own muftis and the administrators of Muslim pious endowments (waqfs), rather than ones appointed by the state.

Turkey has long decried Greek violations of the rights of its Muslim and Turkish minority, from closing down mosques and letting historic mosques fall into disrepair, to refusing to recognize Muslims' election of their own muftis.

These measures violate the 1923 Treaty of Lausanne as well as the European Court of Human Rights (ECtHR) verdicts, making Greece a state that flouts the law, say Turkish officials.

Greece's move to finally open a mosque in Athens took place months after Turkey's decision to revert Hagia Sophia into a mosque.

The iconic structure was first built as a church before it was converted into a mosque after Istanbul’s conquest by the Ottomans in 1453 and remained as such for nearly 500 years until it was converted into a museum in 1934. On July 10, a Turkish court annulled a 1934 Cabinet decree that had turned Hagia Sophia into a museum, paving the way for its use again as a mosque after an 86-year hiatus. Thousands streamed into the mosque on July 24, from the country’s leaders to visitors from around the world.

As a response, Greek Prime Minister Kyriakos Mitsotakis said at that time that what was happening in Istanbul was "not a show of force but proof of weakness."

The harsh statements from Greece were reciprocated by Turkish authorities, who often referred to the lack of mosques and the miserable conditions of Ottoman heritage buildings in Greece.

One of those heritage buildings is the Ottoman-era Tzistarakis Mosque, which was established in the late 1700s by the then-governor of Athens. The mosque has been turned into a museum of Greek folk art. Another one is the Fethiye Mosque, which is being used as an exhibition area since 2017 and was shut down before that date.

The situation of the mosques and Ottoman heritage is similar outside of Athens.

For instance, the Faik Pasha Mosque in the city of Narda (Arta) in the Ioannina region was turned into a church after the population exchange between Turkey and Greece in 1923. The mosque, which was later abandoned, was used as a bar-pavilion in the 1970s.

The mosque, which seems to have been built as the center of a complex in the 15th century, is now in ruins.

On the other hand, mosques and historical buildings in many important cities, including the capital Athens, Ioannina, Giannitsa, Crete Larisa, and Kavala continue to share the same fate.