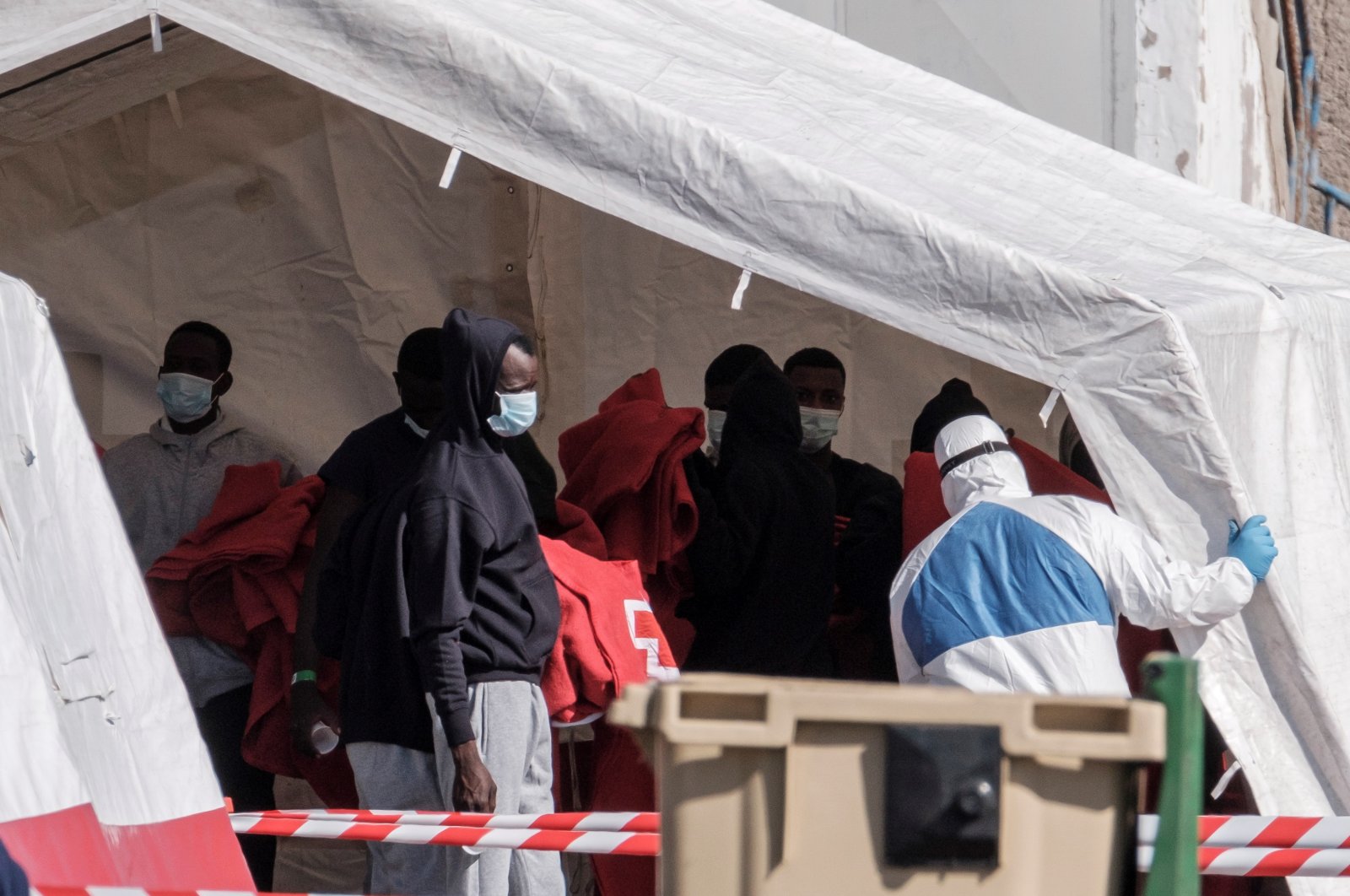 A rescuer (R) in a protective suit takes a look inside a tent at Arguineguin port in Gran Canaria island (the Canaries) after 23 immigrants were rescued as they were trying to arrive in Spain onboard a small boat, Sept. 1, 2020. (EPA Photo)
by French Press Agency - AFP Sep 09, 2020 7:18 pm
RECOMMENDED

Spain's coast guard has rescued nearly 300 migrants from several boats near the Canary Islands, including one with a dead body on board, officials said Wednesday, the latest arrivals in a migration surge there this year.

At 283, the number of arrivals was the highest in the Canaries in a 24 hour period since 2007, said a Red Cross spokeswoman on the islands.

A spokeswoman for the central government's representative on the archipelago said the people were plucked from eight boats near the Atlantic Ocean islands west of Morocco.

The body of one migrant was aboard a boat carrying 57 migrants, including a child and two women, spotted on Tuesday off the island of Tenerife, a coast guard spokesman added.

Spain's coast guard rescued 126 migrants on Wednesday morning from three boats spotted off the islands of Gran Canaria, Lanzarote and Fuerteventura, the nearest of the Canary Islands to the African coast.

With migrant reception centers across the archipelago stretched to capacity, over 300 migrants who arrived in recent days are now being housed in a makeshift camp in Gran Canaria's Arguineguin port.

The route from western Africa to the Canaries is notoriously dangerous but has recently attracted migrants heading for European shores as authorities have cracked down on boats setting out on Mediterranean routes.

Illegal migration to the chain of volcanic islands has risen over seven-fold this year compared to the same time last year, to 3,933 people as of Aug. 31, according to interior ministry data.

At least 239 migrants died between Jan. 1 and Aug.19 trying to reach the Canary Islands, compared to 210 during all of last year and just 43 in 2018, according to the International Organization for Migration (IOM).

The archipelago has been a hotspot for migration before – in 2006, some 30,000 migrants managed to reach the Canary Islands before stepped-up Spanish patrols slowed the pace.