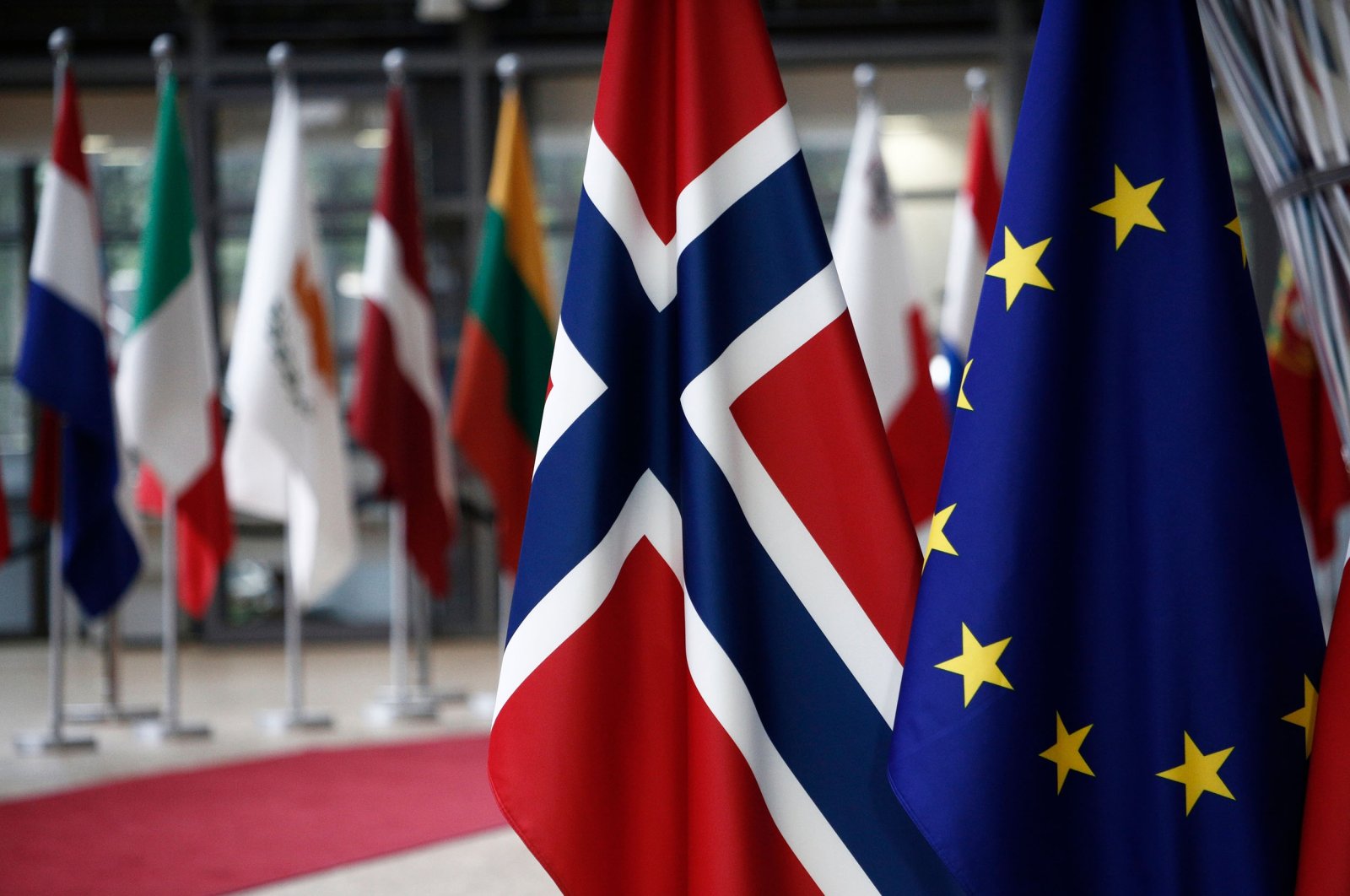 The flags of Norway and the European Union are seen in the EU Council building in Brussels, Belgium, June 5, 2018. (Shutterstock Photo)
by French Press Agency - AFP Sep 11, 2021 2:27 pm
RECOMMENDED

While the upcoming elections in Norway could very well result in the cooling of relations between the country and the European Union, some experts suggest that might not actually be the case.

After eight years of a pro-European center-right government, polls suggest the Scandinavian country is headed for a change of administration.

A left-green coalition in some shape or form is expected to emerge victorious, with the main opposition Labour Party relying on the backing of several eurosceptic parties to obtain a majority in parliament.

In its remote corner of Europe, Norway is not a member of the EU but it is closely linked to the bloc through the European Economic Area (EEA) agreement.

The deal gives Norway access to the common market in exchange for the adoption of most European directives.

Both the Centre Party and the Socialist Left – the Labour Party's closest allies, which together have around 20% of voter support – have called for the marriage of convenience to be dissolved.

"The problem with the agreement we have today is that we gradually transfer more and more power from the Storting (Norway's parliament), from Norwegian lawmakers, to the bureaucrats in Brussels who are not accountable," Centre Party leader Trygve Slagsvold Vedum said in a recent televised debate.

Defending the interests of its rural base, the Centre Party wants to replace the EEA with trade and cooperation agreements.

However, Labour leader Jonas Gahr Store, who is expected to become the next prime minister, does not want to jeopardize the country's ties to the EU, by far Norway's biggest trading partner.

"If I go to my wife and say 'Look, we've been married for years and things are pretty good, but now I want to look around to see if there are any other options out there' ... Nobody (in Brussels) is going to pick up the phone" and be willing to renegotiate the terms, Gahr Store said in the same debate.

Running with the same metaphor, Slagsvold Vedum snapped back: "If your wife were riding roughshod over you every day, maybe you would react."

Initially, Brexit gave Norwegian eurosceptics a whiff of hope. But the difficulties in untangling British-EU ties put a damper on things.

"In Norway, we saw that the EU is a very tough negotiating partner and even a big country like Britain did not manage to win very much in its negotiations," said Ulf Sverdrup, director of the Norwegian Institute of International Affairs.

While Norwegians have rejected EU membership twice, in referendums in 1972 and 1994, a majority are in favor of the current EEA agreement.

During the election campaign, the EU issue has gradually been pushed to the back burner as the Centre Party – which briefly led in the polls – has seen its support deflate.

The nature of Norway's relationship to the bloc will depend on the distribution of seats in parliament, but experts generally agree that little is likely to change.

"The Labour Party will surely be firm about the need to maintain the EEA agreement," said Johannes Bergh, political scientist at the Institute for Social Research, "even if that means making concessions to the other parties in other areas."

It's possible that common issues, like the fight against climate change, could in fact bring Norway and the EU even closer.

"Cooperation with the EU will very likely become stronger because of the climate issue" which "could become a source of friction" within the next coalition, Sverdrup suggested.

"Even though the past 25 years have been a period of increasingly close cooperation, and though we can therefore expect that it will probably continue, there are still question marks" surrounding Norway's future ties to the EU, he said.

These likely include the inclusion and strength of eurosceptics within the future government as well as the ability of coalition partners to agree on all EU-related issues.

Meanwhile, Brussels is looking on cautiously.

The EEA agreement is "fundamental" for relations between the EU and its partners Norway, Iceland and Liechtenstein, according to EU spokesperson Peter Stano.

But when it comes to the rest, "we do not speculate on possible election outcomes nor do we comment on different party positions."