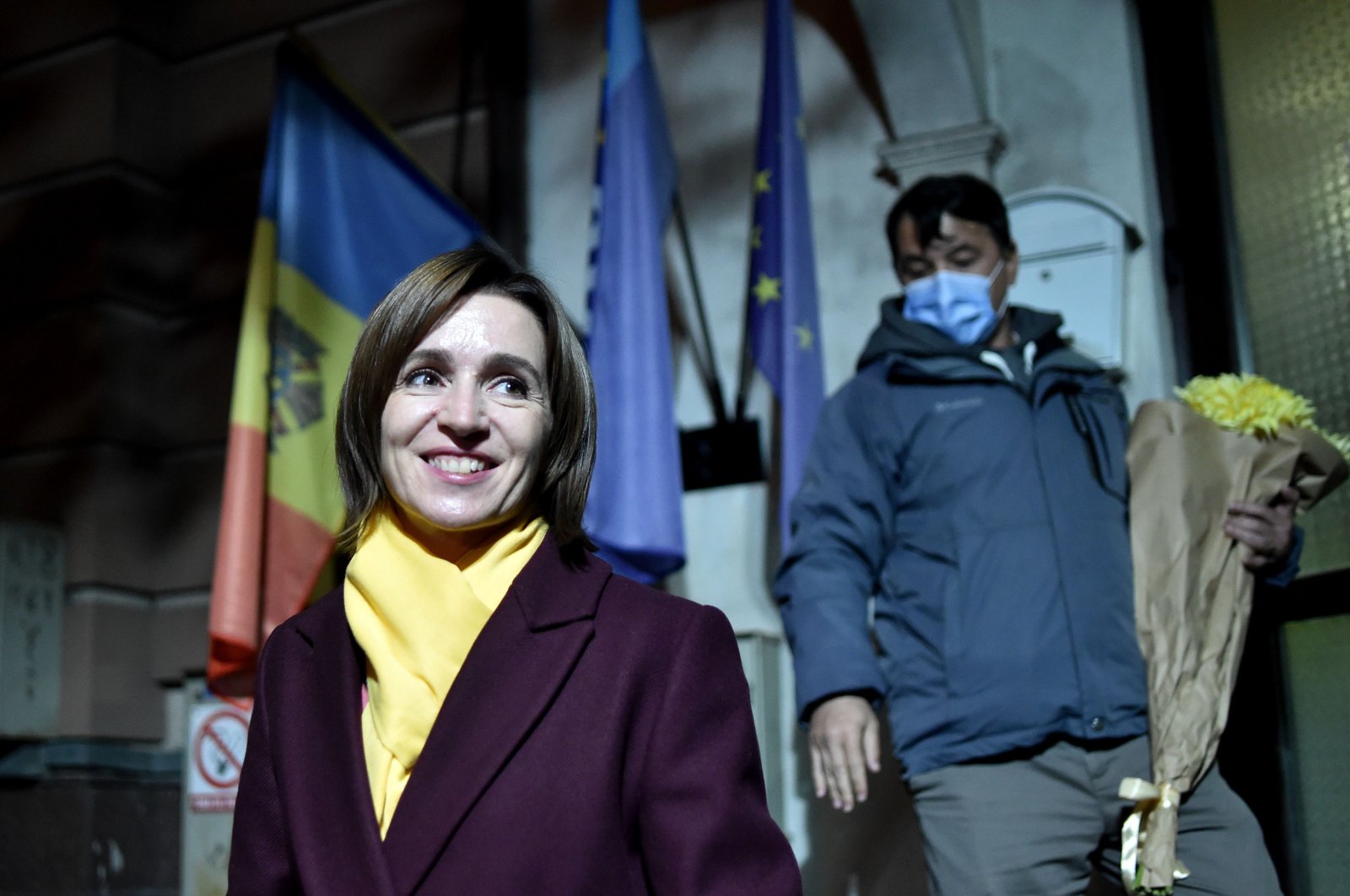 Moldovan presidential candidate Maia Sandu smiles as she leaves the Action and Solidarity Party office following her victory in the second round of the country's presidential election, Chisinau, Moldova, Nov. 16, 2020. (AFP Photo)
by Agencies Nov 16, 2020 11:13 am
RECOMMENDED

The former prime minister was leading on Monday with 57.74% of the votes over Igor Dodon's 42.26%, with the full results expected within five days, according to Reuters.

With 99.95% of the votes tallied by early Monday, according to the Moldovan Central Election Commission website, Sandu's victory may be ill-received in Moscow.

Moldova, a former Soviet republic in Eastern Europe between Ukraine and European Union member Romania, has long been divided between aspirations to more closely integrate with the EU and loyalties to its former ruler, Moscow.

"Preliminary data is clear, they speak for themselves," Vladimir Sarban, the commission's deputy head, told a news conference. He said the final results would be announced within five days.

Celebrations broke out late Sunday in front of the opposition headquarters in the center of the capital Chisinau, with supporters chanting "President Maia Sandu" and "a country for young people."

In the first-round vote earlier this month, the 48-year-old center-right politician won a surprise victory against Dodon. Earlier on Sunday, as polling stations closed, Sandu said she was "confident that the voice of the nation will be heard," Agence France-Presse (AFP) reported.

She added that "today, you have the power to punish those who robbed you, who reduced you to misery and forced you to leave your home," a clear allusion to her rival who has been targeted with accusations of corruption.

The appeal has resonance in one of Europe's poorest countries where as many as 40% of citizens are estimated to have traveled abroad to work.

Sandu, who worked for the World Bank and briefly served as prime minister, also called for "maximum vigilance" against possible fraud.

"We must maintain good relations with the European Union and with Russia," he added.

Caught off guard by the electoral setback in the first round, Dodon urged his supporters at a rally on Friday to vote and take to the streets after Sunday's ballot to "protect our victory." The Kremlin-backed candidate, reportedly aided by Russian advisers, had stepped up rhetoric against Sandu.

"If we show weakness, we will lose our country," Dodon said at the rally.

Sandu, who heads the Party of Action and Solidarity, has promised to wage a fight against endemic corruption in the country of about 3.5 million.

Moldova has been rocked by multiple political crises and a $1-billion bank fraud scheme equivalent to nearly 15% of the annual economic output.

The tiny ex-Soviet nation is under the watchful eye of Russia, which wants polarized Moldova to remain in its sphere of influence at a time when several Kremlin-aligned governments are rocked by political unrest.

Russia, faced with multiple protest movements this year targeting allies in Belarus and Kyrgyzstan, will be watching Sunday's vote closely.

Last month Russian President Vladimir Putin called on Moldovans to cast their votes for Dodon with the head of Russian Foreign Intelligence Service (SVR) Sergey Naryshkin, accusing the U.S. of preparing a "revolution" scenario in Moldova.