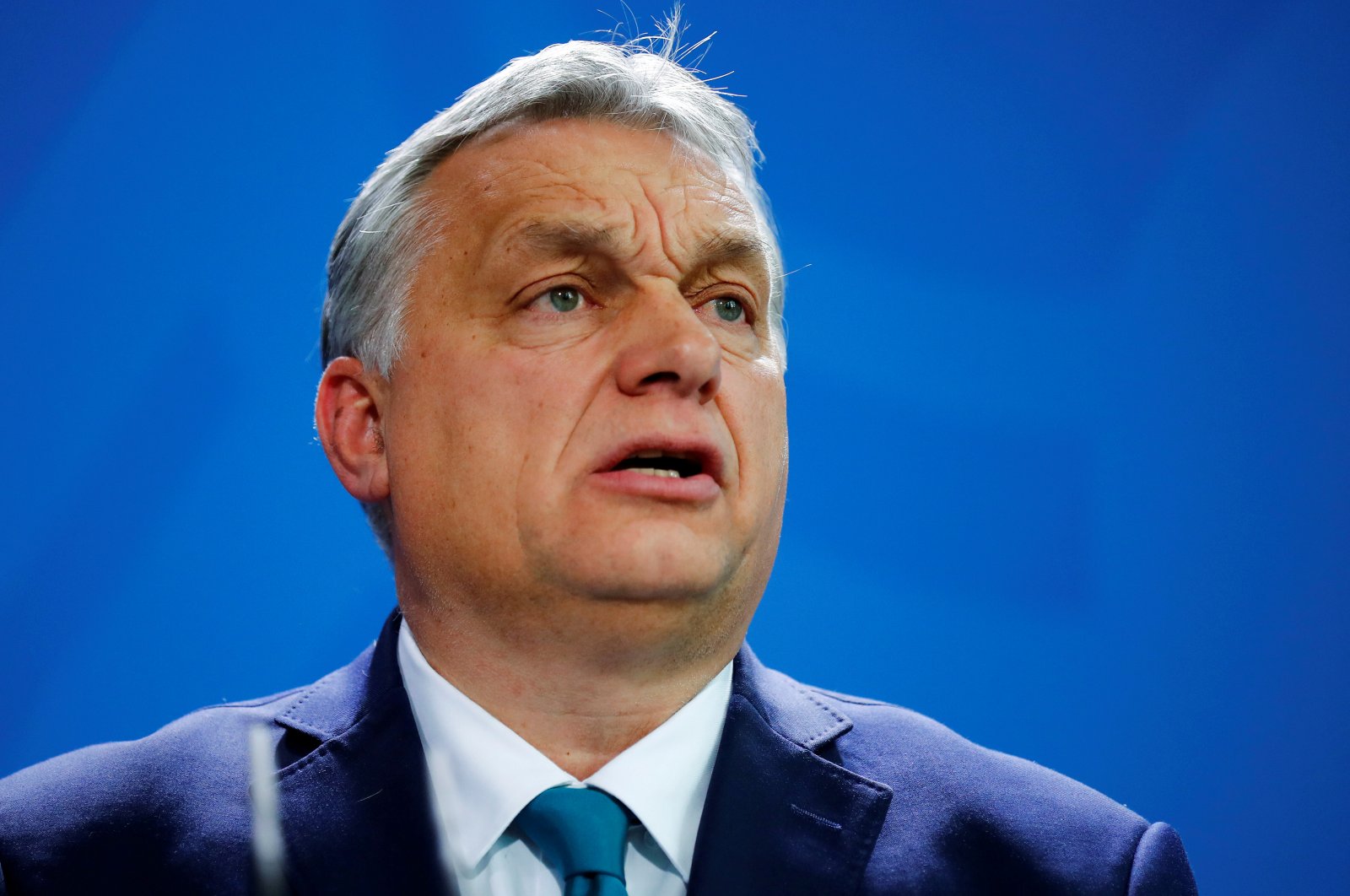 Hungarian Prime Minister Viktor Orban speaks to the media before talks with German Chancellor Angela Merkel at the Chancellery in Berlin, Germany, Feb. 10, 2020. (Reuters Photo)
by Agencies May 06, 2020 2:40 pm
RECOMMENDED

Hungary can no longer be called a democracy after unprecedented democratic backsliding, a human rights watchdog said Wednesday, bemoaning the "precipitous" fall in the rankings of Prime Minister Viktor Orban's "regime."

The U.S.-based Freedom House declared in its annual "Nations in Transit" report that Hungary is instead a "hybrid regime ... in a 'grey zone' between democracies and pure autocracies."

The watchdog said the EU member had been a "democratic frontrunner" in 2005 and that "its decline has been the most precipitous ever tracked" by the group.

In 2020 Hungary became the first country to fall by two of the group's ranking categories and "leave the group of democracies entirely," said Freedom House.

"Hungary today can no longer be regarded as a democracy," it said.

"After centralizing power, tilting the electoral playing field, taking over much of the media and harassing critical civil society organizations since 2010, Orban moved during 2019 to consolidate control over new areas of public life, including education and the arts," it said.

The adoption in March of a COVID-19 emergency law that lets the government rule by decree indefinitely "has further exposed the undemocratic character of Orban's regime."

A Hungarian government spokesperson dismissed the ranking and described Freedom House as the "fist" of the "Soros network," referring to U.S. billionaire George Soros, who Orban has long accused of meddling in Hungary.

"Freedom House was once known as the bipartisan human rights organization. With their Soros funding, they've declined," said Zoltan Kovacs in a Twitter post.

"Anyone who doesn't conform to their liberal view gets downgraded," he said.

Freedom House also reported a "stunning democratic breakdown" across the 29 countries it surveyed, from central Europe to central Asia.

It cited controversial judicial reforms in Poland, "increasing state capture, abuse of power and strongman tactics" in several Balkan countries, and also ranked Serbia and Montenegro for the first time as "hybrid regimes."

On Tuesday the Hungarian parliament passed a declaration rejecting the Istanbul Convention on the prevention of violence against women and called on the national government to lobby against it in the European Union.

Backed by the governing right-wing parties, the document was passed with 115 votes in favor, 35 against and three abstentions.

The opposition voted against the resolution, which called on the government to take no further steps toward ratifying the document.

During the vote, women politicians held up signs quoting sexist and misogynist remarks made by the government lawmakers at earlier parliamentary sessions.

Orban and his party have long fought against what they call "gender madness," forbidding universities, for example, from providing courses in gender studies.

In Tuesday's resolution, the government said it had "the right to defend its country, culture, laws, traditions and national values and that views on gender held by the minority should not endanger this."

The Istanbul Convention, a treaty developed by the Council of Europe, aims to create a legal framework to prevent and fight against violence against women and domestic violence.