Over 1,000 refugees stuck in Spain’s Canary Islands as officials struggle with migration rise 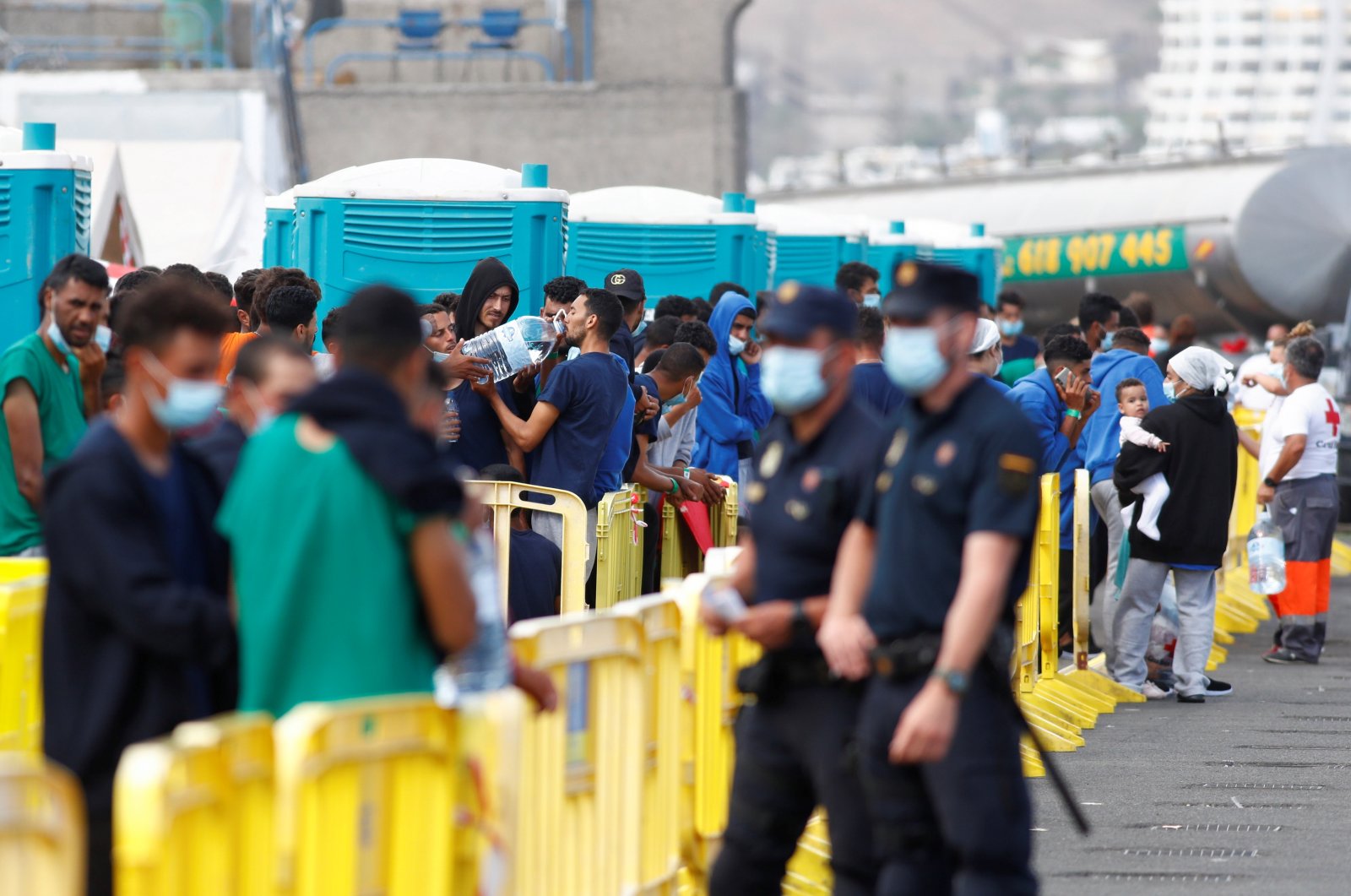 A migrant drinks water after dozens of migrants arrived at the south of the island of Gran Canaria, in Arguineguin, Spain, on Oct. 20, 2020. (Reuters Photo)
by ASSOCIATED PRESS Oct 21, 2020 4:56 pm
RECOMMENDED

Rescues at sea and arrivals of flimsy boats from Africa on Spain’s Canary Islands, where local authorities are already struggling to cope with the pandemic, have strained emergency services and left hundreds of migrants stuck for days in a makeshift harbor camp.

Over 1,000 people, including women and at least three toddlers, woke up Wednesday in a dozen emergency tents set up by the Red Cross on the Gran Canaria island’s Arguineguin dock, where they were joined by some of the 300 people rescued in the early hours of the day.

The condition of the migrants, many of whom were left to sleep on the floor for days with just a blanket over them, is redoubling criticism from human rights organizations that see little progress in the government’s handling of the emergency.

While Mediterranean crossings are down this year, arrivals on the Canary islands across a treacherous part of the Atlantic Ocean are up nearly 700% on the year. It's the most perilous approach to Europe, having claimed more than 200 lives so far in 2020.

The Interior Ministry says more than 8,100 migrants have reached the archipelago, more than 100 kilometers (62 miles) west of the African coast, in roughly 300 boats so far this year.

Despite the increase, the final 2020 figure is unlikely to match the 30,000 arrivals seen in 2006. Spain’s government delegation in the archipelago told The Associated Press (AP) that the makeshift facilities in Arguineguin were a response to "an exceptional need, given the intensifying and increasing arrivals of migrants" and that the government was working "around the clock" to find more suitable locations.

After 72 hours under police supervision, while they are being identified, new arrivals would normally be transferred to migrant centers if they qualify for deportation, or to facilities run by non-governmental groups, especially if they apply for asylum. But the government has blocked nearly all transfers to the Spanish mainland arguing that many international borders are closed for them to be deported or continue on to other European countries.

Meanwhile, migrants are tested for COVID-19 and if any are found positive the need for quarantine also lengthens the process, Red Cross spokesman José Rodríguez Verona told Eldiario.es news daily.

To make room at the dock, some migrants have been sent to empty hotels and vacation resorts on Gran Canaria island, a tourist magnet hit by the pandemic’s effect on global travel. Still, with more than 300 arrivals per day, authorities have been unable to properly deal with the influx.

By mid-Wednesday, Spain’s Maritime Rescue Service had brought to land 325 migrants from 14 boats. That was after nearly 400 were rescued from at least 20 boats on Tuesday, including 10 survivors found along the dead body of an African man in a boat that was picked from high seas by a merchant vessel.

An AP reporter also witnessed the rare arrival on a beach of dozens of migrants from northern Africa in three wooden boats, who were taken away by Spanish police. Beefed-up security in the Mediterranean has reduced migration from Africa to the Spanish mainland and the Balearic Islands in 2020, with 30% fewer arrivals between January and mid-October compared to a year earlier.

But the surge in traffic to the Canary Islands comes at a high cost in human lives.

At least 218 migrants have died on the way or gone missing this year, according to the International Organization for Migration, with most drowning or succumbing to dehydration.

Arguing that they lack enough resources, local and regional officials in the Canary Islands have asked the Spanish government for more help, including the use of two military facilities to process the migrants.