Over 100,000 protest controversial police law in France amid violence 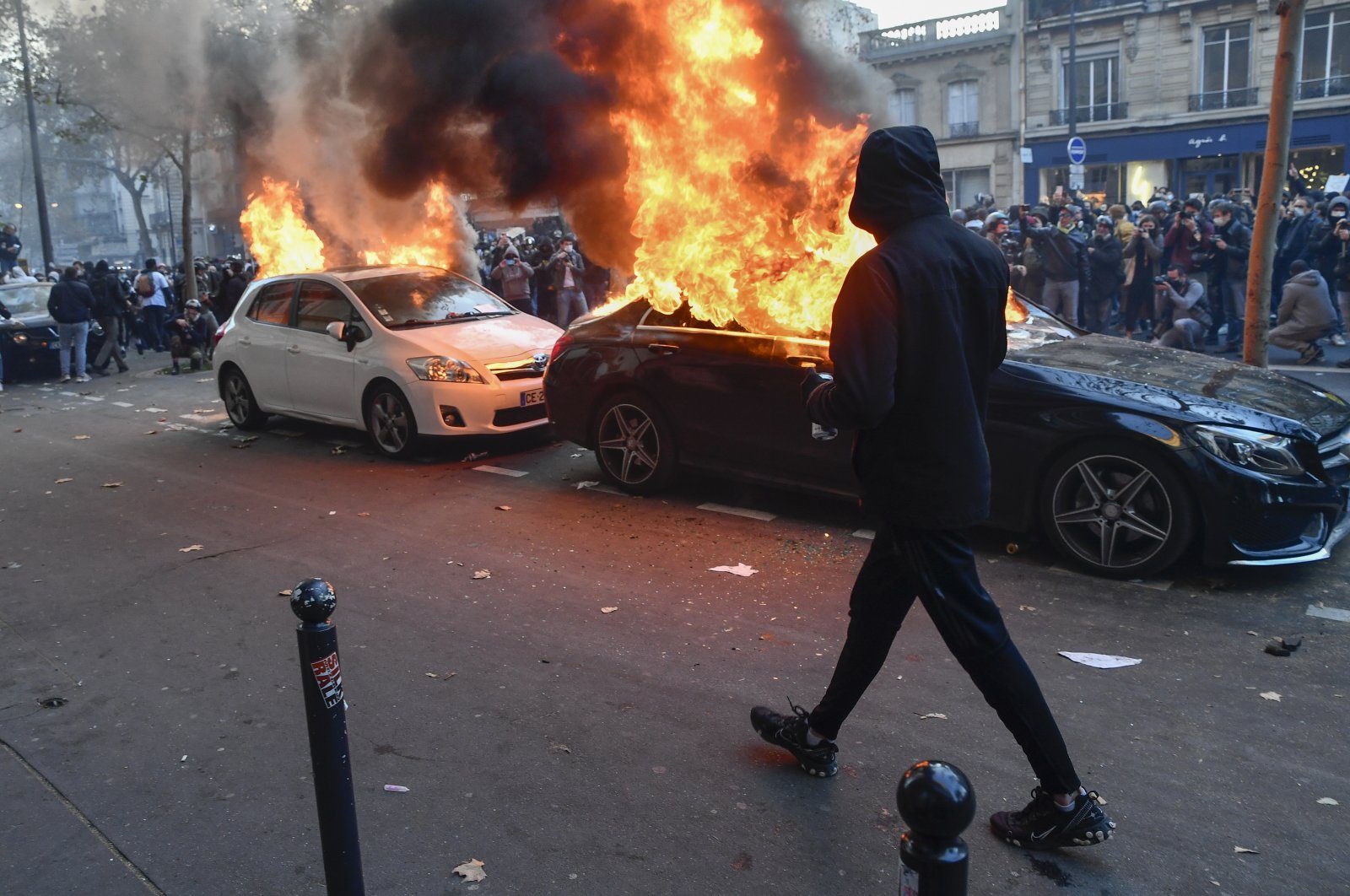 As brutality by law enforcement increases, up to a half-million demonstrators demand the withdrawal of new security measure while a Syrian journalist gets injured covering the events

Tens of thousands of critics of a proposed security law that would restrict the filming of police officers protested across France on Saturday, and officers in Paris who were advised to behave responsibly during the demonstrations repeatedly fired tear gas to disperse rowdy protesters who set fire to France's central bank and threw paving stones.

Protests took place in cities across France including Paris, Strasbourg, Marseille and Lyon.

Isolated riots broke out in Paris, where 46,000 people marched according to the ministry.

VIDEO — Police brutality under spotlight in France as protests over new security law continue amid violencepic.twitter.com/jTkfJirNcT#LoiSecuriteGlobale

Organizers later said that as many as 500,000 people nationwide had joined the marches, with as many as 200,000 in Paris, AFP reported.

Protesters erected barricades in Paris and threw objects at the police. In the Breton city of Rennes, officers used tear gas against demonstrators.

What was a peaceful march for hours turned increasingly violent as the evening approached, with fires set in the afternoon to barricades and trash cans, and the facade of the Banque de France by nightfall, along with a kiosk, brasserie and several cars.

Banners and signs were held by some proclaiming defiant messages against police: "Not see, not caught," "Carrying weapons is out of service," "France: Country of Rights of the Police" and "Police everywhere, justice nowhere."

Probably the most pronounced sign of all: The word "Liberté" written in black on a white background encircled by a red noose.

Police were present throughout the day, yet brigades streamed in as the crowd grew more turbulent, to jeers and "boos" from demonstrators. Firefighters were on hand to douse blazes that gave rise to smoke that was visible for a mile, and the palpable smell of gas lingered at certain points.

France's Interior Minister Gerald Darmanin said a total of 37 police officers and gendarmerie were injured in the protests across France. Taking to Twitter, he condemned what he said was "unacceptable violence against law enforcement."

Paris police, meanwhile, said that nine people had been arrested.

The march was banned by officials Thursday, given the presence of the coronavirus with police calling for only a rally. An administrative court, however, overturned that decision late Friday to allow the protest to proceed.

Elected officials, as well as members of the Yellow Vest movement, were in attendance, along with labor unions and human rights organizations such as the Society of the Rights of Man and Amnesty International.

"Our liberty is in danger; we are really happy to see all of these people here today," said Manon, a student who marched with her friend, Clara. "It shows that Parisians are a people in pursuit of their liberty."

Regarding new legislation making its way through parliament, her words were straightforward.

Asked what should be done, Clara said suspensions should take place. "This institution is racist, homophobic and sexist."

Like the Black Lives Matter protests before it, demonstrations Saturday sent a strong message to law enforcement and the government that people's rights at the hands of the police cannot be eclipsed.

The protest comes after the National Assembly adopted a comprehensive security bill Tuesday. The controversial portion, Article 24, prohibits taking photos of police in the line of duty and disseminating those images online and in the media. The government says the new security law should better protect law enforcement by restricting video recordings of police operations, but many see freedom of the press at risk because of the planned law. Violators can face a yearlong prison sentence and a 45,000 euro ($53,800) fine. The bill goes to the Senate in January for examination.

Journalists, news organizations and human rights groups denounced the bill as an attack on freedom of expression, which was made all the more pronounced in a week that saw two extreme cases of police brutality.

On Saturday, three officers accosted music producer Michel Zecler inside a studio in Paris's 17th arrondissement, causing extensive injury and bleeding. As they left the premises, police tossed a tear-gas grenade through the studio window.

Officers later wrote a false description of unfolding events in a police report. Darmanin said the event was "shocking" and called for the officers' suspension Thursday.

On Monday, police cleared a migrant camp on Paris's Place de la République in the 11th arrondissement, an unnecessary and harsh action in which several migrants were seen beaten in footage that went viral.

Darmanin estimates the number at nationwide demonstrations Saturday was 133,000, but organizers place the figure closer to half-a-million.

Aboud, 30, felt he had to be present for the greater good and to secure his liberty.

"For me, France is going down very quickly. Sometimes you have to do what is right. We have to protest for our freedom. Clearly, there is much violence against people, and it is really wrong," he said. "As a black man, I have a mission here. Other black people don't have the opportunity or education I have. We have to be here. It's very important."

A press freedom group has denounced the "unacceptable" injury of an award-winning Syrian photojournalist during the protests.

Ameer Alhalbi, a freelance photographer who worked for Polka Magazine and AFP, was covering the demonstrations over the weekend.

In AFP photos, Alhalbi's face appears bruised with much of his head covered in bandages.

Christophe Deloire, secretary-general of Reporters Without Borders, tweeted that the 24-year-old had been wounded at Place de la Bastille by "a police baton" and condemned the violence.

"Ameer came from #Syria to #France to take refuge, like several other Syrian journalists. The land of human rights should not threaten them, but protect them," he said in a second tweet.

Deloire also noted Alhalbi had been clearly identified as a journalist.

Dimitri Beck, director of photography for Polka, said that Alhalbi had suffered a broken nose and an injured forehead and had been taken to hospital.

Alhalbi has won several international awards, including second prize in the spot news category for the World Press Photo in 2017, mainly for his coverage of the Syrian conflict in his home city Aleppo for AFP.